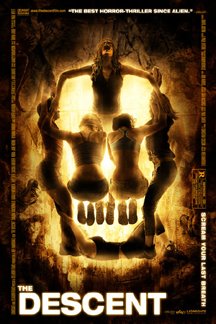 Finally, FUCKING FINALLY, someone remembered the cardinal rule of horror films: the shit should be scary, plain and simple. I loved director Neil Marshall's spectacular werewolf flick DOG SOLDIERS from a few years back — if you haven't seen it, run out right now and check it out — and when I heard that he helmed 2005's THE DESCENT I was ready to have my socks knocked off. Well, let me tell you flat out that Marshall's new flick, just getting released in the US, is everything I expected it to be and just a little bit more.

THE DESCENT follows six friends as they gather a year after one of their outdoorsy sisterhood has lost her husband in a hideous car accident and they decide to go spelunking in an Appalachian cavern to try and restore their pal's verve, along with strengthening the group bond. The ego-tripping leader of the group takes them into an unexplored shaft in hopes that they will be the first to truly explore it and gain them some serious caving cred (mostly for herself, if truth be told), but things go horribly awry when the entrance collapses and seals them in, two miles below the earth's surface. With limited supplies and no map, the six grope about in the claustrophobic darkness, all too aware that the batteries for their helmet lights and flashlights will eventually run out. And then they realize that they are not alone.

The film is pretty intense from the get-go — we're talking original TEXAS CHAINSAW MASSACRE-style, and that ain't hay — but it takes a while to get rolling, yet when it does it is emerges as a major league nerve shredder, gory as all fuck, and is simply the worst case of a no way out scenario that I've seen in a long time. Much like the previous DOG SOLDIERS, only more slickly made, THE DESCENT pulls absolutely no punches, and about two thirds of the way in you suss out that there is no way that the six protagonists will survive this. One of the things I admire about Marshall's sensibility is his ability to take an already bad situation, complicate it further with a fantastic element, and levae the viewer in nail-biting suuspense until his inevitable bleak ending.

I was going to see the film in the theater when it opened, but I read in several articles that the US distributors felt that the original ending was a bit much for us delicate (and stupid) Americans, so they added a different ending. Well I said FUCK THAT SHIT, and decided to wait for it to hit DVD, purportedly with the original ending and two additional ones. Then I remembered a little hole in the wall DVD shop hidden in Brooklyn's Fulton Mall that gets foreign releases of films on DVD long before they hit the US, annd I recallad seeing THE DESCENT on display there months ago. I hauled ass over ther and got my grubby mitts on the last UK copy, and watched it in the leisure of my own humble apartment, and was as pleased as punch. So if you can get the UK DVD, go for it, but if you see THE DESCENT in the theaters remember that what you see is not the real, bleak-assed finale. TRUST YER BUNCHE!!!
Posted by Bunche (pop culture ronin) at Tuesday, August 08, 2006

You liked this movie a lot more than I did.I found it an unbelievable predictable mess with characters I was hoping would bite it. They are going to wander around the cave and get picked off one by one. Gee, who could see that coming. The monsters were tremendous fighters in one scene and terrible fighters in the next. It was shot lousy and hard to follow because of the moving camera in the dark. Sure the ending was bleak but I was barely paying attention by then.