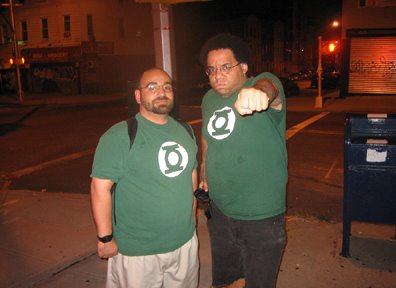 About three years ago I was eating lunch at the local diner, wearing my Green Lantern Corps emblem t-shirt, when an old black militant walked over to me and said, "Say, my brother. Is that an Ashanti drum symbol on your shirt?" When I told him what it was he looked at me with the scorn I'd expect from him if I'd been fucking a red-headed white woman in front of him (which I would have been happy to do, but I digress...).

So last night as I was winding down my day in the kitchen, Will the bartender demanded that I look toward the door. As I looked to the front of the bar, a total stranger whom Will stopped on the street walked in, proudly rocking the Green Lantern Corps emblem. Superhero symbols are far from uncommon in Brooklyn, but the Lantern is rare.

Anyway, here's me and the stranger representing for Oa.

NOTE: if you have no idea what the fuck I'm talking about, use your computer and google Green Lantern Corps and Oa; I recommend the excellent Wikipeidia.
Posted by Bunche (pop culture ronin) at Friday, August 18, 2006

For the folks without proper kit:
http://www.80stees.com/pages/t-shirts/Comic_Book_t-shirts/Green_Lantern_t-shirts.asp

Awesome, Bunchie! GL is one of my faves. Gotta love that Kilowog. Shoot me a line when you get a chance.