THE FINE ART OF “LINCOLN LOGGING” 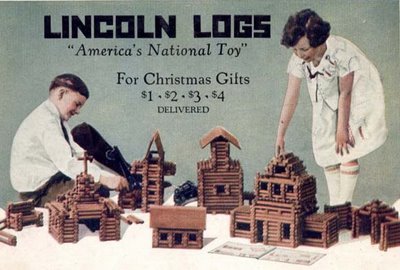 The summer had arrived and the affluent denizens of Connecticut’s answer to Beverly Hills shucked off their winter malaise, bought brand new and cornea-wiltingly hideous beach attire, and readied themselves for a season of fun in the sun at poolside. And not just any community poolside, oh no; these children of privilege had huge, elaborate pools of their own, fenced off from the encroaching world outside of the family compound. Yes, Joe Average would never enjoy the luxury of having his own backyard oasis, and who gave a shit about him anyway?

This state of in your face, kiss-my-rich-ass prosperity did not sit well with every resident of the favored burg however, and it was up to the adolescent neighborhood terrorists to make their distaste known.

Kenny anxiously stared at the clock radio next to his bed, each minute seeming to drag while awaiting the stroke of midnight. Once that magic hour arrived, Kenny would don his Chuck Taylors — the most silent of stealthwear sneakers —sneak out of the house into the moonlit night, and make his own personal stab against his wealthier neighbors.

Yes, the nighttime was the right time, and Kenny had prepared for many hours in advance. His meals that day had consisted of lots of fiber and assorted health food swiped from his mother’s pantry under the pretense of fixing his questionable diet, and he could feel the inevitable results percolating deep within his innards…

Soon would be the hour for Lincoln Logging.

At last it was midnight, and Kenny threw off his covers and stole away from his home, all while his family slept securely. He wheeled his bicycle out onto the street and pedaled away, carefully keeping to the shadows. As he traveled he evaluated each house that he passed, calculating which would make a perfect venue for the night’s artistic/political declaration; after all, presentation was everything, and if he couldn’t do it right it wasn’t worth doing at all.

After an hour of slowly prowling the private back streets Kenny’s eyes were entranced by a driveway entrance with a cement lawn jockey acting as its sentry. But what good is a guard if he can say and do absolutely nothing except perpetually smile his minstrel show grin? “Not much good,” thought Kenny as he stashed his bike in the nearby shrubs, taking care to obscure the vehicle’s reflective surfaces. He then sat in the foliage for ten minutes, observing the premises for any hint of security, even something as simple as a yappy household dog that might betray his presence. Soon, Kenny felt that the coast was clear and crept around the perimeter of the house, making a beeline for where he instinctively knew the pool would be.

And there it was, a furnished lagoon right smack dab in the middle of suburban Babylon, its depths illuminated at night, even when not in use, just to draw the world’s attention to its owner’s Croesus-like assets. The surrounding deck looked ready to handle a party of sixty or more at the drop of a hat; cushioned lawn chairs and couches littered the space, all angled for a clear shot at the standing bar and the enormous propane grill, behind which was an opulent chef’s prep area large enough to hold untold barbecue fixings.

Yes, this was a ripe setting for the blow that must be struck.

Kenny once more surveyed his surroundings for wary eyes, and when he felt certain that he was unobserved he slipped quietly into the cool, inviting water of the swimming pool. The underwater silence helped to center Kenny, and after a few laps around he was ready to perform the task at hand, the grand statement for Westport’s have-nots, a stiff, upraised middle finger to the greedy bastards who looked down on him and the others like him, namely the ethnic and white trash unworthies who somehow infiltrated their bastion of means and power.

Kenny broke the surface and filled his lungs with the humid air, then swam to the bottom of the pool, coming to rest in its deepest point. Now was the time for relaxation, so he cleared his mind of all thought and let his body loosen. As he reached a state of perfect calm, he felt his bowels begin to lurch, and he swiftly doffed his swim trunks with an ease that came from repetition. “Yes,” he thought, “Come on, oat bran!”

The excremental payload began to force its russet way out of Kenny’s distended butthole, a profane anti-birth, a filthy nativity that spoke more eloquently on the topic of class separation than the fourteen-year-old Kenny could hope to verbally articulate. And then the log shot free of its intestinal incarceration, lazily making its way to surface in an image reminiscent of a newborn whale in search of its first breath.

Kenny hauled himself out of the pool and surveyed the fruits of his mission. There, swaying gently in the chlorinated water, lay a spectacular two-foot, corn-packed toilet fish, floating in the opulent pool with an arrogance that would be right at home on a crocodile, secure in the knowledge that it was the baddest motherfucker on the river. And, much like its amphibious brother, the log in question was guaranteed to elicit shrill screams of panic and primal revulsion when encountered.

Satisfied with his contribution to the ambiance, Kenny readied his departure, pausing only to ponder what the manufacturers of the children’s toy Lincoln Logs would think if they knew their product’s name had become locally synonymous with squatting out a huge grunter in some rich bastard’s see-ment pond.
Posted by Bunche (pop culture ronin) at Thursday, August 17, 2006

Okay...I'm disturbed. Not by the act or the socio-economic statement...but by the fact that I keep getting drawn back to paragraph 12 by the absolutely dead-on metaphorical beauty of the writing, you son-of-a-bitch. Disgustingly, hilariously brilliant. I salute you! ;)