POP CULTURE QUOTE OF THE WEEK 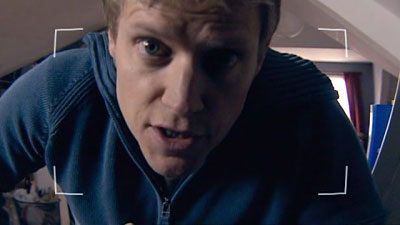 At the very end of the story, told entirely as one man's videotaped document — one of only two really worthwhile episodes for the year — regular guy Elton Pope (Marc Warren) sums up his take on the world after his very, VERY bizarre experiences with extraterrestrial life forms — in which his girlfriend ends up as nothing more than a living face fused with a square of sidewalk cement, who, when Elton mentions that they still even have "sort of a love life," says, "Oh, don't mention that..." — Hey, you do the math — and I couldn't agree with him more:

"You know, when you're a kid they tell you it's all 'grow up, get a job, get married, get a house, have a kid, and that's it.' No. The truth is, the world is so much stranger than that; it's much darker, and much madder...and so much better."
Posted by Bunche (pop culture ronin) at Wednesday, August 16, 2006

"...one of only two really worthwhile episodes for the year..."

I thought the whole year was actually pretty good. I liked last years Doctor more, but overall it was entertaining.

You guys watch Dr. Who. Why don't you marry each other? Heh heh...

Oh yeah?! Maybe I will just to make you jealous cuz you're really gay!

Jared, John and I already married each other at the Holy Church of The Doctor, and Sue was our "beard." Boy, are you an oblivious motherfucker...