COMICS WORTH READING: UNCLE SAM AND THE FREEDOM FIGHTERS and SECRET SIX

Let’s just get one thing right out in the open from the get-go: I hate crossover series and imprint-wide “event” comics, those annual transparent attempts at separating the fans from their cash in hopes of reading about an “earth-shattering tale that will change the (FILL IN COMPANY HERE) Universe forever!” Nine times out of ten these epics turn out to be nothing more than a waste of trees that provide little or no change to the storytelling status quo, only occasionally yielding an intriguing plot element or new spinoff series.

The latest such offering from DC Comics was the recently concluded INFINITE CRISIS, a well-illustrated but staggeringly mediocre mega-event that repeated almost beat-for-beat CRISIS ON INFINITE EARTHS, the company’s attempt at continuity house cleaning from just over twenty years ago, and the lack of trying to give the fans anything new or even worth the time it took to read was nothing short of a cynical slap in the face of the comics consumer. The series may as well have had “You fanboys are so fucking pitiful that you’ll buy anything!” on the covers. And as previously mentioned, the series was a company-wide crossover that has spawned a number of offshoots; I especially dread this inevitable by-product of such publishing blockbusters since they nearly always suck so badly that they are unfit for use even as fish-wrapping. Thankfully, the turgid borefest that was INFINITE CRISIS has given us two very good series to sink our eager teeth into.

UNCLE SAM AND THE FREEDOM FIGHTERS once more dusts off a bunch of characters that DC acquired the rights to back in the days, and the times they’ve been featured have pretty much sucked the big hard one. I mean, to be absolutely fair, what the hell can you do with a team that is not only called the “Freedom Fighters,” but consists of the Phantom Lady (whose abilities, other than looking great in a skimpy costume, have always baffled me), the Ray (an uninspired pseudo-Flash who flies), the Human Bomb (he blows up real good), Doll Man (an eight-inch dude in a costume that would make the original Robin call him a fruit), and mister “I want you” himself, Uncle Sam? 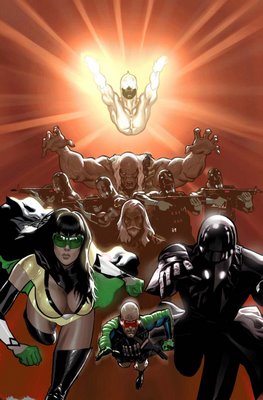 UNCLE SAM AND THE FREEDOM FIGHTERS #1

I forget who coined the phrase, but it has been said that there are no bad characters, just bad stories, and Justin Gray and Jimmy Palmiotti are handling these guys very well, working from some ideas established by comics’ resident llama of the lysergic, Grant Morrison. This time around, the FF (no, not the guys in the blue PJ’s) have been recast as a government sanctioned metahuman black ops team that kicks ass on terrorist threats that the regular government agencies can’t tackle. Not much happens in issue one, but unlike the pervasive trend of nothing whatsoever happening for the first several issues of any given new series — a crime that Marvel is increasingly guilty of — this inaugural installment spends a lot of time reintroducing us to the featured players, some of whom have been considerably altered to actually make them interesting for once; of particular interest are the new takes on Phantom Lady and Doll Man, the former now the jaded daughter of a presidential candidate who parties to excess every night in order to cope with the insane horrors that she witnesses as part of her job, while Doll Man is one of the hardest specialist soldiers in the world-saving biz, only he’s so small that he’s now nicknamed the “human action figure.” Hey, the guy may only be eight-inches tall, but a bad motherfucker is still a bad motherfucker, and I’m dying to see more of the little guy putting much foot to ass.

The Human Bomb is even cool to behold, and when he shows up looking like an even more sinister, minimalist Darth Vader in an outfit reminiscent of an SS officer’s uniform gene-spliced with slaughterhouse gear, it’s made clear that some of his team members are not at all comfortable around him because, well, DUH, he’s a human bomb, for fuck’s sake!

As for Uncle Sam, he’s nowhere to be found yet, but his unique heroic abilities are sorely needed when the team’s next mission is to take out Black Adam, the first man ever to wield the power bestowed upon a mortal by the wizard Shazam — and that shit ain’t hay, let me tell you! — , current despotic ruler of the Middle eastern nation of Kandakh, and America’s number one terrorist threat. Y’see, Uncle Sam is the living embodiment of the American spirit, so he’s kinda/sorta godlike, and his involvement in all of this ass-whuppin’-to-come should really make things interesting.

Adding further gravitas to these proceedings is the stunning artwork by Daniel Acuna; stylistically the work brings to mind Adam Hughes, Frank Cho and a few other first-stringers, but Acuna has a look all his own, and the characters all display a refreshing, fleshy physicality — one can practically feel the weight of Phantom Lady’s ample sweater-goblins shifting when she moves — and that’s very important here since such a consideration works toward making a reader believe that an eight-inch bald guy can cause serious harm to an opponent. No joke, kiddies, this book is one to watch, so give it a chance. 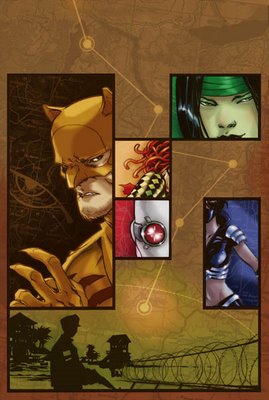 I love villains. Let’s face it, without them our heroes would have nothing to do, and the adventure genre as we know it would be nothing more than a bunch of Merchant Ivory-type genteel pussies sitting around talking about doilies and their feelings, or some shit. Think about it: Bond without Blofeld? Nothing more than an arrogant, elitist clotheshorse. Batman without the Joker? A seriously disturbed rich kid with some majorly deviant choices in outfits and companions. Simply put, the bad guys are the real point of interest in any adventure tale, and when the story focuses on them at length the results are usually fascinating. Two words on that: the Wrath.

Anyway, the idea of a comic book told from the villain’s point of view is nothing new, what with SUPER-VILLAIN TEAM-UP (featuring Doctor Doom and the Sub-Mariner; I don’t care what anyone says, the Sub-Mariner is NOT a villain. The guy represents an oppressed minority and he takes no shit when it comes to dealing out justice in the name of his people; No wonder us black folks like him so much!), SECRET SOCIETY OF SUPER-VILLAINS (pretty much every major DC bad guy of the mid-1970’s), and the late, lamented SUICIDE SQUAD probably being the most prominent in the genre, but there has never truly been a compelling piece in this area until writer Gail Simone’s VILLAINS UNITED and its monthly spinoff SECRET SIX.

I’ve loved Simone’s work for years, especially her ongoing run on BIRDS OF PREY, but she really shines when tackling the difficult task of making us care about a bunch of dangerous sociopaths, some of whom are obviously barking mad. In Simone’s hands even a nineteenth-rate weakass like Catman can be rendered cool and threatening, and her mildly dysfunctional “family” of super-villains offers an unpredictable team that can literally go in any direction at a moment’s notice. The Secret Six themselves are all flat-out criminals and badasses, each refusing to knuckle under to a much larger organization, specifically the new and ultra-powerful Society of Super-Villains, and when the Society decides to teach the Six an intend-to-be-fatal lesson about defying them war between the two factions is declared, and as they say, war is hell.

The Six consists of Scandal (de facto head of the team, and daughter of immortal villain Vandal Savage), Catman (Tarzan-esque cat-themed ass-kicker, and vicious field leader), Ragdoll (a truly deranged, psychopathic contortionist), Deadshot (one of the world’s deadliest marksmen), Knockout (a powerhouse Female Fury from the other-dimensional hellhole of Apokalips) and whoever happens to be around to fill the roster — the first being a nameless Parademon who bought the farm during the mini-series and is now a stuffed item in Ragdoll’s room, and the Mad Hatter at the moment — and with a cast like that there is very little chance of the reader getting bored. Violence, treachery, intrigue and even G-rated same-sex hanky-panky spice up the stew, and I can assure you that I’ll be there for the long haul.

And in closing: if you don’t like the work of Gail Simone, you can pucker up right now and kiss my big beige ass.
Posted by Bunche (pop culture ronin) at Friday, August 11, 2006

I only read the preview of Uncle Sam & The FF but it seemed to me to just retread where Stormwatch/The Authority had walked years ago. Your review seems to support this. Have you read Ellis' Stormwatch or The Authority?
I have always disagreed with the idea that the villains were more interesting than the heroes. If this were true there would be more books starring villains. But they always fail.