In my opinion, in light of recent anti-Semitic comments, Mel Gibson may as well sit back and watch his career careen down the toilet like a hearty corn-filled ass-gator. Disney is rethinking their ties to the former Road Warrior, having apparently cancelled his proposed Holocaust television series, and fearing a backlash against his upcoming film on the decline of the Mayan civilization, APOCALYPTO.

Sure, the dumbass has issues with Jews and fermented beverages, but that's no excuse for bigotry. Anyway, I've managed to obtain a top secret image of the poster for the Gibster's long awaited followup to his Mad Max adventures, but it's all moot since it will most likely be pulled too. 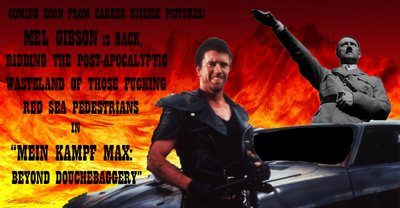 NOTE TO PARENTS: Photoshop can be a dangerous thing; I'm a forty-one-year-old semi-Luddite, and if I can throw something like this together in about fifteen minutes, imagine what your far more computer-savvy offspring can come up with!
Posted by Bunche (pop culture ronin) at Wednesday, August 02, 2006