BATMAN: WHATEVER HAPPENED TO THE CAPED CRUSADER? THE DELUXE EDITION (2009) 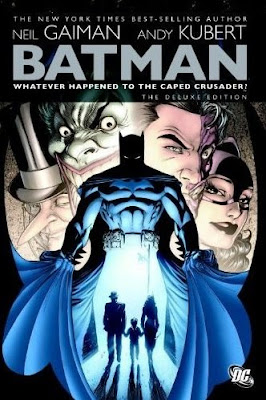 Is anyone else out there as completely and utterly fucking sick of Batman as I am? I grew up with major love for the Caped Crusader, and in the wake of the mostly-brilliant THE DARK KNIGHT RETURNS (1986) and the genuinely excellent BATMAN: YEAR ONE (1987) — both tellingly over two decades old — the character of Batman has become an unlikable downer of a tyrannical and fascistic asshole whose adventures I've only occasionally kept up with because I get them for free thanks to my reviewing assignments. Back in the days I used to question Dick Grayson's bitter rejection of his mentor/surrogate dad, but nowadays I think he had the right idea.

Batman has been put through a number of really stupid "event" story arcs in the past decade or so because, in my opinion anyway, no one in comics really knows what to do with him anymore. As a writer, Frank Miller got in there two decades ago with the aforementioned classic runs and said just about everything that needed to be said regarding what made Bruce Wayne and what he could eventually end up as, so really what was left after that? DC sure as hell didn't know and that's been plainly evident ever since. Batman getting his back broken by a steroid-abusing muscle-boy in Lucha Libre-style fetish gear? The great Gotham earthquake? The death and resurrection, for the umpteenth goddamned time, of Ra's Al-Ghul? Each a big "who cares?' on the non-changing landscape of the DC Universe's stolid status quo.

And then came Grant Morrison's BATMAN: R.I.P., an unintentionally ironic title for a story arc that "killed off" Bruce Wayne in more sense than one, right alongside the nigh-unreadable FINAL CRISIS — one of the worst "event" stories I've ever witnessed, by the way — , both of which supposedly take place within the current DCU continuity yet provide totally contradictory fates for Bruce Wayne. There are plenty of Grant Morrison apologists out there and the guy certainly can write when he wants to (his runs on ANIMAL MAN and DOOM PATROL and 2000 A.D.'s classics ZENITH and BIG DAVE being personal favorites), but both of those recent events were self-indulgent to say the very least, and in the case of FINAL CRISIS downright head-scratching. And when it came to BATMAN: R.I.P., did anyone who hasn't lived in a cavern in the deepest recesses of Paraguay actually believe that DC Comics would kill off one of its international cash-cows on a permanent basis? That strategy was equally transparent when they pulled it with Superman, and the utter shit that sluiced from the savagely jailhoused anus of the Man of Steel's stable of books during his absence was truly appalling to behold. The Cyborg Superman? Steel? The new Superboy? "Hraka!," as the rabbits of Watership Down would say. And now Batman's "dead" — yeah, right — and the next couple of years will be flooded with assorted dreck to keep the addicted sated until the time of his inevitable return. (I did enjoy the first of issue of the Morrison-scripted BATMAN AND ROBIN with terrific art by Frank Quitely, but from what I hear Quitely's only on it for the first three issues, so...)

Then, adding insult to injury, came "Whatever Happened to the Caped Crusader?", a two-issue eulogy for the entire career of the Batman as predictably heartfelt and flowery as one would expect from Neil (THE SANDMAN) Gaiman. Striving far too hard to be a "literate" sendoff to some seventy years of Batman and the many different interpretations of him and his world during that time, Gaiman's words are brought to visual life by the capable hand of Andy Kubert (with inks by Scott Williams), and the skills of the two combine to create a homunculus of sheer style and artificial narrative potency. It's pretty to look at and it reads like poetry in places, but overall it left me totally cold and uncaring.

The surreal narrative places the reader into an open-casket wake populated with characters from Batman's seven-decade history and we are made privy to the sometimes bizarre reminiscences of such familiar faces as Catwoman (seen here in her Golden Age persona, only filtered through Gaiman's wistful perception), a mind-game-playing Alfred who fosters his master's escalating madness, Betty Kane (the blonde original Batgirl from the early-1960's), Dick Grayson, assorted villains who are on their best behavior, and even Superman, each of whom provide contradictory scenarios surrounding the hero's demise. Is that supposed to make us overlook the contradictions found in Grant Morrison's two published deaths for Bruce Wayne, pehaps as one of those "never believe the teller, only believe the tale" kind of things? Whatever the case, it's a thoroughly unmoving who's-who allowing Gaiman to wax poetic while the disembodied voice/spirit of Batman has an equally emotionally false tete-a-tete with the spirit of his mother. The story is also one of those "spot the cameo" tales where the reader who is not deeply versed in the complete history of the Batman will more than likely be lost without a road map (or a copy of the DC COMICS ENCYCLOPEDIA), and I very much doubt that the casual reader will get what Gaiman was going for at all.

As previously stated, this bit of comic book rockstar masturbation is only two issues in length, so the publisher has padded out this so-called "deluxe" edition with four other Gaiman-scripted Batman-related yarns from back in the days (aka "reprint filler"). There's an amusing "behind the scenes of a comic book" story illustrated by Simon Bisley that's kinda/sorta a swipe of the old Chuck Jones cartoon shorts where Wile E. Coyote is slightly visually altered to become Ralph the wolf, foil to Sam the sheepdog, and the pair are depicted as two workers at a daily job, breaking their established character roles before and after work and during their lunch break, and in this case that trope is applied to Batman and the Joker. But if you've seen any of those Jones cartoons you've seen the gag, and what's done here will justly seem derivative. 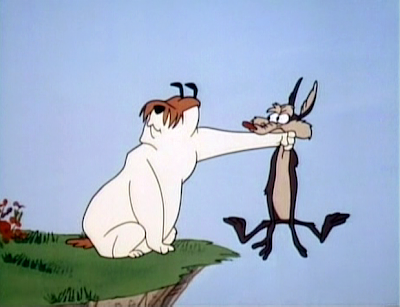 Chuck Jones' Sam and Ralph, later recast by Neil Gaiman and Simon Bisley as Batman and the Joker.

The only thing that might be a hook here is the art of Simon Bisley, but I've never really cottoned to his work — especially not after he singlehandedly sank SLAINE with his legendary and overrated "The Horned God" painted epic, following truly spectacular runs by Mike McMahon and Glenn Fabry — and if you feel the same way I do, you'll find the black and white noodling seen here to be sloppy and over-stylized at best.

The remainder of the book is fleshed out with a not bad Poison Ivy piece drawn by Mark (FABLES) Buckingham, and some Kevin Nowlan work serving as a framing story for a terrific Bernie Mireault Riddler origin puzzler that raises more questions than it answers (which is only fitting for a Riddler origin) and is easily the best thing found between this collection's covers. There's also a perfunctory selection of sketchbook and pencil process stuff from Andy Kubert, but while it's appealing to look at, it offers little by way of a look into what the artist was thinking. In other words, it's just there to take up page space.

So what we have here is little more than a tarted-up annual that in no way deserves a hardcover edition, let alone a "deluxe" version that costs twenty-five bucks. I once loved the Batman and admired him as the more or less lone badass among DC's pantheon who had no built-in superpowers, and that all-too-human aspect, along with his indomitable will and across the board learned status, is what endeared him to so many for so damned long. That's why it truly breaks my heart to see this collection that can now serve as a symbolic tombstone for a once great hero whose reputation and creative viability have been tarnished and cheapened by his treatment in the hands of the Burtons and Schumachers of the Hollywood entertainment sphere, to say nothing of the indignities done to him by the powers that be at his own publishing house, or to name them more honestly, his pimps. Requiescat in pace, Batman. (Or rest as much as you can with the assorted necrophiles having their vile way with your moldering corpse...)
Posted by Bunche (pop culture ronin) at Wednesday, July 01, 2009

I think the downfall of Batman, for me, was when in the 80's they changed his origin. He went from studying under all the great minds of the world to studying under all the great fighters of the world. Thus he was no dangerous because of his mind but because of his crazy fighting skills. He's been a Wolverine clone ever since. Sad.
I am interested in the Bernie Mireault Riddler story. He was always a favorite cartoonist of mine (see "The Jam") but I haven't seen anything new from him in years.

If I actually had to pay for my comics, I'd be so pissed at the confusing stories I've had to suffer through. While I truly love Gaiman and honestly believe he is a better writer than Morrison, I was much like you in the "eh" category of giving the two issues a rating. Kubert's art surpasses the story on this one.

And for much disappointment as there was with FC, it topped the NY Times Best Seller List for GN in hardcover the week it came out.

Why are the ghosts of Batman's youth walking out of his glowing loins?