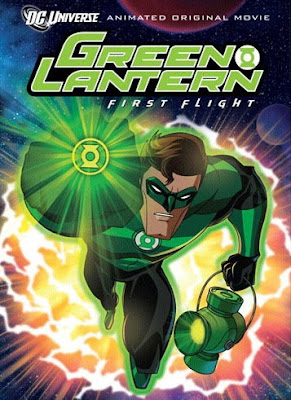 The latest of DC's animated DVD features finally brings the Green Lantern thing to the screen in a good way that's something other than a guest shot on JUSTICE LEAGUE. It's the origin of Hal Jordan retold, updated and altered to varying degrees, but even hardcore GL goons like me will find much to enjoy here.

Turning Hal's origin into a riff on the TRAINING DAY template, the story brings a green (pun intended) Hal to Oa and sees him learning the ropes from everyone's favorite fascist asshole, Sinestro (who, in the comics, has become one of my favorite villains in the past two years). That's all you need to know, other than that it's pretty damned cool, it has a shitload of extra-terrestrials on hand and scads of ring-slinging and intelligent use of the GL "constructs," plus it gives us the Corps and other characters featuring new, more "alien" designs for many faces familiar to those who've read the adventures of the Green Lanterns for the past fifty years or so. Abin Sur and Kanjar Ro are the notable re-designs, and it's always fun to see Kilowog, Arisia, Salaak, and even Ch'p, so out of the DC straight-to-DVD features I would rank this pretty high, but then again I have yet to truly dislike any of them (although I would rate SUPERMAN/DOOMSDAY as the weakest of the lot). I'm not gonna go into any further detail — I'll save an in-depth analysis for when I get the two-disc edition — other than to mention that the voice cast is spot on, with Christopher Meloni — LAW & ORDER: SVU's Detective Elliot Stabler — making for a very good Hal. This is good stuff and will definitely be enjoyed by comics fans who groove on what Warner Bros. Animation has done with the DCU characters since BATMAN: THE ANIMATED SERIES. My only complaint is that who knows when we'll see more animated Green Lantern? The live-action movie does not fill me with much faith, so I'm quite content with what I got from this cartoon, produced on what's probably a jillionth of the bigscreen movie's budget. Oh, and this hits stores on DVD and Blu-Ray in single and two-disc versions on July 28th. RECOMMENDED.
Posted by Bunche (pop culture ronin) at Saturday, July 18, 2009