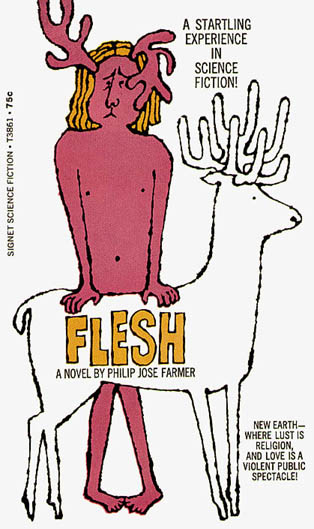 Cover to the 1969 paperback edition that I read thirty years ago.

Upon returning to Earth after exploring deep space and assorted worlds for 800 years (suspended animation facilitated this), the crew of the starship Terra finds the planet radically changed by wars and an eerily-prescient case of climate change, and enough time has passed to allow the formation of several tribal territories within the former United States, most of which practice religions bearing much in common with ancient pagan fertility worship. The people of the Washington D.C. area, know as the Deecee, annually crown a "sunhero" who, like in times past, reigns for a determined period of time and is elevated to the staus of a living god who gets to go on tour and engage in ritual orgies whereby he impregnates armies of willing virgins, all in service of the Great White Mother. Captain Peter Stagg — a loaded name if ever I read one — is chosen to be the new sunhero and is given surgically-implanted deer horns that boost his physical capabilities to superhuman levels, something he'd certainly need if he were to successfully couple with scores of eager females each night. The downside of this is that the horns pump him full of hormones that turn him animalistic and nigh inexhaustible, a slave to the physical and sexual appetites required for his role, and when his time as sunhero is over he is to be ritually castrated and sacrificed.

While Stagg embarks on a tour of hedonistic excess, his crew must figure out how to fit in with a world very much not their own, and hopefully find some way back to their families' places of origin. No easy task considering that travel technology has regressed to roughly that of sailing vessels and horse and buggy, only with deer standing in for equines. The crew's efforts are quite interesting, but Stagg's journey/plight is the real focus of our attention, and as the tour progresses he tries in vain to retain his humanity as his chemically-spurred hyper-satyriasis rages ever further out of his control and his heart longs for Mary, a beautiful captive "mascot" from Caseyland, a country at perpetual war with the Deecee. As Stagg and Mary develop feelings for each other, the sunhero's uncontrollable need to rut places Mary in imminent danger of rape on the business end of a superhuman penis, so what's to become of her when Peter finally loses it? And how will they escape from a pack of homosexual "Pants-Elf (translation: "Pennsylvanian") warriors who intend to sacrifice them to their god and possibly get a taste of Peter's ultra-masculine charms? And even if everything works out for all involved, where could they go on this crazy, ravaged world to find a moment's peace?

The idea of being able to fuck a hundred eager women per night is quite appealing to a fourteen-year-old heterosexual male sensibility and I have to admit that upon reading FLESH for the first time I totally glossed over the ritual castration and sacrifice angle in hope of graphic depictions of Greek god-style orgiastic fornication (which I did not get). But now, at age forty-four, the idea of keeping both one's junk and life sound a hell of a lot better than having the unlimited opportunity to drink and feast like an ancient Sybarite and surf on an ocean of the fluid from the Bartholin's glands. Nonetheless, I was fascinated by the decidedly low-tech world Farmer presents, and it's one of the few such imaginary places that straddles the fine line between theoretical paradise, provided that inter-tribal war was not a factor, and an insane dystopia. I love how the return to pagan ways results in a blunt, matter-of-fact openness about nudity and sexuality, as well as how the various tribes are much more in touch with the natural world thanks to the hard lessons learned following the events leading to their societal change, and could definitely have read more about that world at large.

Though nowhere near as out-the-window-with-its-dick-in-its-hand insane as A FEAST UNKNOWN, FLESH does betray a manic energy and full-throttle madness that I'm beginning to think may be a hallmark of Farmer's writing, and if that's the case then I can't wait to discover what else the guy has up his sleeve. I think I'll go for either IMAGE OF THE BEAST or STRANGE RELATIONS next... 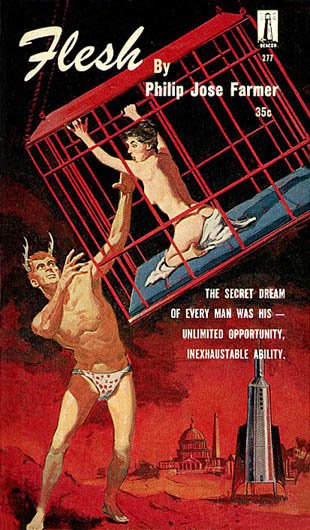 Cover to the 1960 first printing, depicting the captive Mary and a way-too-clad Peter Stagg.
Posted by Bunche (pop culture ronin) at Thursday, July 16, 2009

So why do I sense thematic parallels between this book and the later adventures of Den, Pilgor, and Roger Daltry's Franz Liszt?

And why does he have polka-dot tighty-whities?