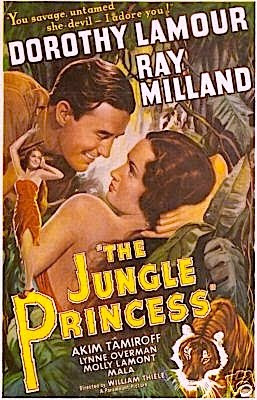 Chalk up another one to my ongoing quest to see every jungle girl movie ever made, even the crappy ones. Fortunately for me, this was one of the good ones.

Even though the infamous Hays Code served as Hollywood's stringent organ of self-censorship during much of American cinema's Golden Age, every now and then a movie with what would have then been termed "risque" material managed to sneak past the precursors of today's MPAA and such a film was THE JUNGLE PRINCESS. Though often listed as the debut film of legendary sarong-goddess and frequent collaborator with Bob Hope and Bing Crosby in the famed ROAD TO (fill in the blank) movies, Dorothy Lamour, the truth is that she'd been kicking around Tinseltown for a few years in bit parts and this movie was her big break. Looking at it even from a distance of seventy-plus years it's easy to see why Lamour became a star overnight after this one. 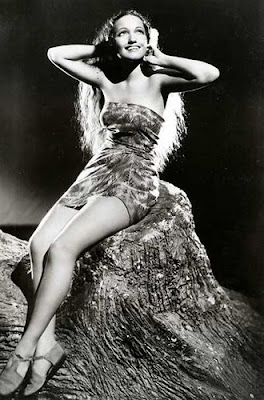 Overnight sensation Dorthy Lamour as "jungle princess" Ulah.
The story opens with a cute little girl of about four years old spear-fishing in a stream, her only companion an equally cute tiger cub. Before you get into an uproar over this being one of those "tigers...in Africa???" movies, it's soon made clear we're in Malaysia, which also serves to explain how the darkened-up little actress isn't a Negro (not even one of the familiar cork-blackened Hollywood variety). About two minutes into things the poor tyke's village is utterly decimated, trampled into the ground by an inexplicably pissed-off herd of elephants, leaving the girl an orphan, and when the narrative picks up again it's years later and a bunch of "great white hunter" types — British, natch — find themselves in Malaysia for reasons largely irrelevant to the story's main thrust (so to speak), namely the capture of wild animals. We're told by the understandably annoyed native guide that several such attempts have been thwarted by "the tiger who laughs," a potentially dangerous local legend feared by the superstitious guides, porters, and hunters in the British party's employ.

One of the Brits, a very likable sort named Chris (a shockingly young Ray Milland, who would win a well-deserved Oscar for THE LOST WEEKEND nine years later), has no interest in capturing animals and is along for outdoorsy inspiration that will fuel the completion of the book he's working on. Also along for the ride is his spoiled and veddy British high society fiancee, Ava (Molly Lamont), whose father is the head of the expedition. Ava's instantly pegged by viewers as the real plot complication when she brattily rails against Chris' desire to stay behind and finish his book rather than leave for England and be her lap dog, so it's both a blessing and a curse when she fucks off out of the story for a good bit of the proceedings, thus allowing Chris to get jumped by a huge tiger and meet the beast's companion, Ulah (Lamour). Left for dead by the natives when the tiger — named Limao — showed up, Chris not-so-reluctantly finds himself in the tender and friendly care of Ulah, who of course takes quite a shine to the strange white man. Along with Limao and Ulah there's also a chimp who's the film's obvious knockoff of Cheeta from the concurrently-running Johnny Weissmuller Tarzan series, and once Chris joins them they all become one happy family in an idyllic jungle paradise.

As Chris acclimates himself with jungle fantasy living, Ulah, who has presumably had no contact with men other than those she harassed with the help of Limao, reveals a sexually aggressive streak that I can't believe got by the Hays people, especially since her behavior toward Chris leaves no doubt whatsoever as to her intentions. Chris, not being an idiot, cannot help but notice Ulah's advances and suffers the tortures of the damned as he agonizingly stays true to his fiancee despite his obvious (and quite understandable) growing affection for the saronged she-Tarzan. While Ava may be the model of upper-crust Britishness, Ulah's charms are many, including exotic beauty, a very sweet and rather girly nature despite her knack for unassisted survival (unless you count Limao, and I kinda do) in a tropical jungle, and an uninhibited kindness that's nothing short of infectious, and for Chris it's pretty much all over when she sings a song to him in Malay that is very obviously an impassioned love song. Unable to take it anymore, Chris quite unwillingly leaves Ulah and sets off to find his party, unaware that Ulah, Limao, and the chimp are hot on his heels. Needless to say, the shit hits the fan once the presumed-deceased Chris returns and is believed by the natives to be a ghost, followed by "the tiger who laughs" and his toothsome mistress, both of whom are perceived as evil forest spirits who must be killed. Then there's the matter of Ava, who's relieved to see Chris is alive and well...until she meets Ulah and knows she's been pretty much kicked to the curb, thus setting in motion a very much one-sided bit of romantic brinksmanship that forces Chris to wake up and fully acknowledge his feelings for Ulah. But just when you think all of this will be resolved in a way reminiscent of some tired bedroom face, things get resolved in a violent native uprising that seems to have swung in from another film entirely, complete with shootings, stabbings, spearings, and Ulah being prepped for a pretty nasty bit of ritual sacrifice while the Brits await presumed execution.

Basically a distaff ripoff of a Weismuller-era Tarzan movie, THE JUNGLE PRINCESS is very charming and it's easy to see how its steamy parts made it a huge hit for Paramount. The chemistry between Lamour and Milland is far more charming than a potboiler like this deserves, and Lamour is simply perfect as a loving and ultra-feminine schoolboy fantasy figure made flesh. Ulah is gorgeous, sweet, nurturing, fun and funny, and for all I know never has a period, so in short the perfect girl. All she wants to do is love up Chris, and I can only imagine what this movie would have been like if its torrid potential had been allowed to flower in full like the uncut version of the classic TARZAN AND HIS MATE (1934), a film neutered upon release by those Hays killjoys and restored decades later. As is, THE JUNGLE PRINCESS is very charming and lively, but the last quarter of the movie seems to be catering to the Tarzan crowd and not to those of us who by that point were more than hooked on the romantic mishegoss. For me the movie was really turned on its ear by the perfunctory action ending — an army of chimps and monkeys, seemingly hundreds of them, come to the rescue, stealing a page from the elephants at the end of most of the MGM Tarzan movies — a move that almost makes it feel like the movie was completed with the final reel of another film altogether.
Posted by Bunche (pop culture ronin) at Thursday, July 02, 2009

But are there chimps in Malasia?