NOW IS THE TIME FOR...JACKSPLOITATION!!!

In case you somehow missed it, Michael Jackson died a little over a week ago and one of the first things to pop into my mind after his death was announced was just how long it would be until we started seeing cheap posters of him, poor-quality DVDs hastily cobbled together featuring his many TV appearances (or bootlegging his already extant catalogue), and of course what was certain to be a deluge of books laying out his life story and purporting to explain just what went wrong in his quite obviously effed-up psyche. The first evidence I saw of the post mortem capitalism was at the music and DVD store within the Times Square/42nd Street subway station the day after Jackson's death announced, and that was when a twenty-something woman asked the cashier if he had any DVDs of THE WIZ (the horrendous movie adaptation of the 1975 Broadway hit featuring Jackson as the Scarecrow in an all-black re-telling of THE WIZARD OF OZ). The cashier assured her he had it, but only three copies remained so it would be wise of her to buy one now. That amused me because I'd been in the store for an hour, checking out their general selection, and had run across at least forty copies of THE WIZ on the lower shelves, just below notice of the just in off the street newbie customer. At least the guy didn't totally rip the woman off by jacking the price up from ten bucks (although, if you ask me, that's still ten bucks too much for that piece of shit).

The bald-faced cash-ins in the wake of Michael Jackson's death were inevitable and it was only a matter of nano-seconds between the time his corpse was cold and he moment when shoddy merch would flood the streets, especially in neighborhoods populated and/or frequented by my fellow "highly-rhythmic individuals." With that tawdry spectacle in mind, I headed over to Brooklyn's Fulton Mall district for a firsthand walk on the wild side of Jacksploitation. 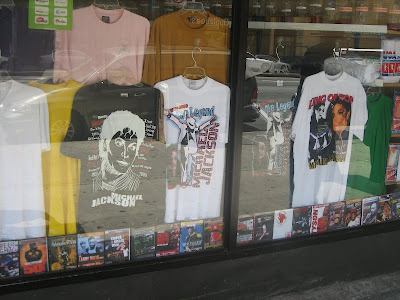 The Jacksploitation was fully evident from the moment I made my way above ground at the DeKalb Avenue R train stop. Seriously, this window display was about six feet to the observer's right once out of the subway, and the quality level of spur-of-the-moment manufacture was about what I'd expected. 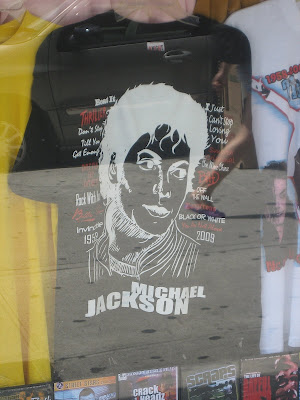 This shirt looked like one of those scratchboard pictures crafted by the more "disturbed" kids in my junior high school art class, missing only the poorly-drawn bloody knives, Led Zeppelin "ZOSO" sigils, and misspellings of "Satan" common to the form. Amusingly, this could serve as a viable photo negative of Jackson from just before his "Bad" period. 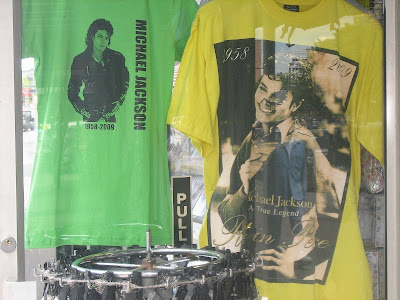 While still kinda tacky, these two examples were nowhere near as ghastly as what I would find on Fulton Street proper. 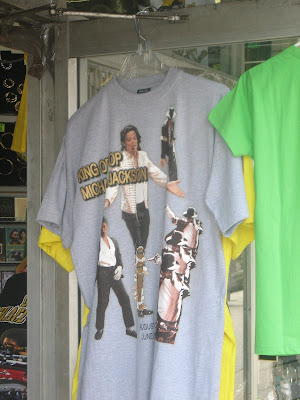 The outstretched arms on this image of Jackson made me wonder if I would see a shirt bearing a crucified Michael. I didn't find one of those that day, but give it a week or so. 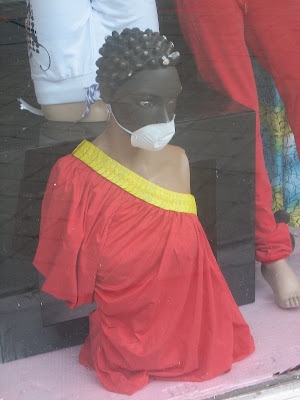 Upon rounding the corner onto Fulton Street I saw by far the most low-rent and creepy of the "tribute" storefronts. Looking like something out of a post-apocalyptic minstrel show, this homage to Jackson's breath mask days is twelve flavors of "ghetto" in one feeble package. 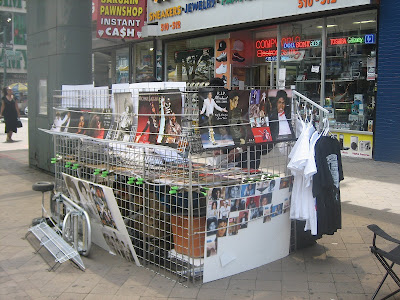 The first of several setups that served all your Michael Jackson needs. Mini-posters, pictures, belt buckles and t-shirts were all available here. 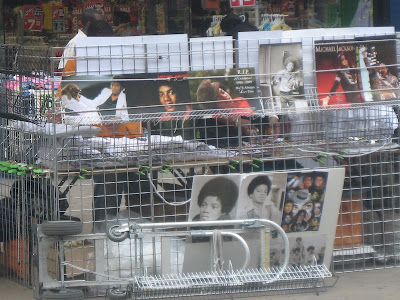 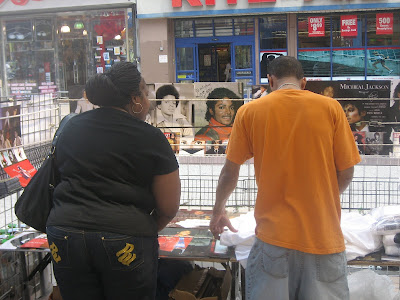 A customer peruses the fine wares. 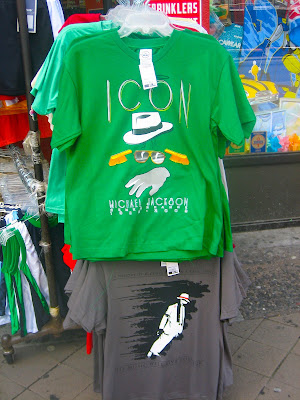 I'm sorry, but lime green never struck me as a Jacksonesque hue. 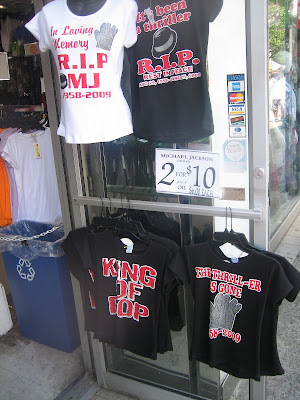 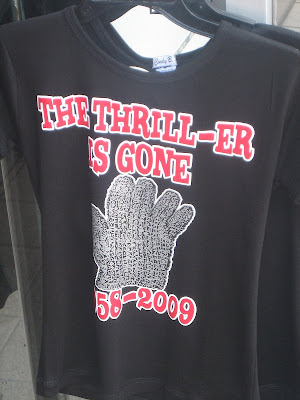 That glove looks more like the gear worn by an abattoir-worker rather than something that would have adorned the King of Pop's dainty mitt. 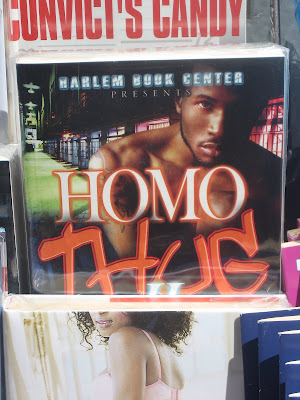 Having nothing to do with Michael, I was intrigued by this novel due to the uber-masculine-oriented black community's generally negative stance on all things homo-licious, unless they're on the down-low. And according to the copy on the book's back jacket, this is a sequel! 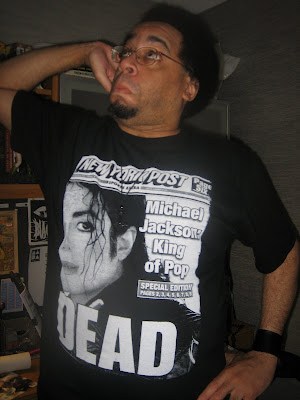 And I'm nearly embarrassed to admit that I could not resist picking up a piece of Jacksploitation couture to go along with my even tackier James Brown memorial/cash-in t-shirt. At least this one featured the sleaziest of all NYC daily newspapers, the New York Post, bearing one of its customary tasteful headlines and an eerie image of the white woman Michael, all for a mere five bucks. And no, I won't be shocked to discover that the shirt, paint and all, is water-soluble.
Posted by Bunche (pop culture ronin) at Tuesday, July 07, 2009

Labels: ON THE SIDEWALKS OF NEW YORK, THE BOOK OF THE POP CULTURE DEAD — ADDENDUM

Wow. Gotta wonder how many of those profits go through back-door channels into Joe "Should Be In Jail Now" Jackson's pockets... as if the bastard weren't raking in plenty of dough right now by way of the Jackson 5 stuff that's selling like mad, too.

Funny (in a not-laughing way) how a celebriculture that couldn't wait to take swings at the Wacko-Jacko pinata now falls all over itself to enshrine him. All for a handful of greasy bucks, right?

Poor guy. Dude deserved much better than what's he's been getting these last few years. I once theorized that he was a psychic vampire, and I'm not sure I was wrong; these days, though, he's the one being devoured.

(Obnoxious WTFery from the Pit Of Limbaugh: "Michael Jackson thrived under Ronald Reagan, whithered under Clinton and died under Obama." smacks head What DIMENSION did that equation just emerge from, Rush? Jesus - that's reaching even for YOU!)