A FORGOTTEN CLASSIC: Squeeze's HITS OF THE YEAR (1985) 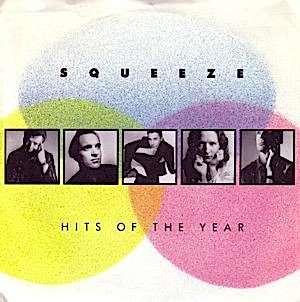 Toward the tail end of my ninth grade year, my buddy Peter the Red Menace began an earnest campaign of turning me on to music that wasn't heard too often on the more hits-obsessed radio stations in and around where we grew up in Connecticut, and during that time he handed me a copy of Squeeze's Argybargy (released in February of 1980). I enjoyed much of its decidedly UK flavor and that aspect steered me toward British groups like the Specials, the Vapors and the Selecter for a period of about three years, and during my high school years the kids in Westport soon jumped on the Squeeze bandwagon. I would haul my easily portable (and rather sad in retrospect) turntable/tape deck and speakers to the basements of my friends' houses and we would get our rather feeble dance on to all sorts of stuff, but the 1982 Squeeze compilation Singles - 45's and Under was a favorite, particularly among the girls, so it got an inordinate amount of play (thus rendering me sick of many of its tracks, especially "Black Coffee in Bed"). My own favorite Squeeze pieces could at the time be narrowed down to a quartet of "Pulling Mussels (From the Shell)," "Take Me I'm Yours," "Another Nail In My Heart," and the morose and neglected "I Think I'm Go Go," all of which I still happily listen to, but it wasn't until late 1985 when I heard "Hits of the Year" that I found my favorite Squeeze tune of them all (with "Another Nail In My Heart" coming in a close second).

In late 1985 I embarked on what turned out to be a two-year tour of 24/7 stonerism, and my college basement dorm room from the Fall of '85 through the Spring of '86 doubled as a weed-smokers flophouse and music appreciation society headquarters. It was there that I enlightened my peers on the finer points of the Cramps, Oingo Boingo, the Mentors, the Dead Kennedys and many, many others, but "Hits of the Year" came as a real surprise to all of us because it just wasn't what anyone would ever have expected from Squeeze. It had a funkier-than-usual beat and an offbeat riff rendered on a xylophone, and while that was interesting enough the song's tone shifts from a pleasant reminiscence to something rather ominous, as is befitting a tune told from the point of view of an airline passenger returning home from holiday only to find himself in the midst of an armed hijacking. There's no irony to any of this and the narrative resolves nothing at its conclusion, leaving the narrator and the listener stuck in a terrifying, potentially lethal situation, and I would imagine it's quite disconcerting once you pay attention to the lyrics while dancing to it. I guess danceable tunes about skyjackings didn't quite fit in with the '80's musical aesthetic at the time, so "Hits of the Year" only made it as high as number 39 on the Billboard chart before it vanished into the mists of pop music obscura. A damned shame really, because it's a really good record. Anyway, here are the lyrics.

HITS OF THE YEAR (1985)
by Chris Difford and Glenn Tlbrook

Held up to ransom assured we'll be safe
The yellow ribbon comes out again
How many gods can there be in one sky
All so important and all so involved
Here on a trigger a disciple of fear
As we wait without knowing if we're hits of the year
Posted by Bunche (pop culture ronin) at Tuesday, July 28, 2009

Ah, the Kennedys and Oingo Boingo - cornerstones of my own college years as well.

Y'know, as there was during the the 1970s, there's a seething dark undercurrent beneath a lot of '80s music. Boingo, The Mentors and the Kennedys were some of the more obvious purveyers of "the dark at the end of the tunnel" (not to mention The Cure, The Smiths, Danielle Dax and so on), but even many of the most apparently "innocuous" artists of that era(*) have some pretty dark edges. I was listening to "First We Take Manhattan" from Leonard Cohen the other week, and that's one chilling-ass song when you stop to think abut it....

-----------
* Pet Benatar, The Pretenders, Laurie Anderson, Kate Bush, The Bangles, The Police, Van Halen, The Tubes, even Don Fucking Henley, Bruce Fucking Springsteen and Phil Fucking Collins - see songs like "Hell is for Children," "Up the Neck," "O Superman," "Get Out of My House," "Following," "Tea in the Sahara," "When Push Comes to Shove," "She's a Beauty," "All She Wants to Do is Dance," "I'm on Fire" and "In the Air Tonight" - eerie shit if you actually listen to the lyrics and take the content in. Too bad so few people do.)

I have the entire Squeeze catalog if you ever need copies. Saw them two years ago at the Beacon. Great show. Going back there tonight to see Steely Dan.

I remember Pulling Mussells but I was more into the Duran Duran and Stevie Nicks (Stand Back, ftw!)

Hits of the Year is a FANTASTIC tune accompanied with a HORRIFICLY BAD music video. I'm sure that did nothing to help its miserable showing in the charts. It still stands as my favorite Squeeze tune.