BEST CHRISTMAS SONG EVER, or ERIC IDLE SPEAKS FOR ME 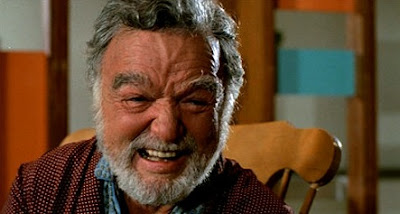 "You see Santa Claus tonight, you better run, boy! You better run for your liiiiife! Heeheheeheeheheheh!"
-The homespun wisdom of Grandpa Chapman (Will Hare) from SILENT NIGHT, DEADLY NIGHT (1984).

WARNING: if you're one of those folks who gets caught up in the magic of Christmas, you are strongly advised to give this post a miss.

So it's the day after Thanksgiving and now the nauseating annual Christmas onslaught can begin in earnest. From now until near or after New Year's Day we will be bombarded with a shitstorm of endless annoying Christmas music, seasonal commercials, guys in Santa outfits ringing bells, roving packs of carolers showing up at your door to sing some of the aforementioned annoying Christmas songs at you, and, worst of all, relentless phony cheerfulness being shoved down your throat from the moment you wake until the moment to lay your head on your pillow at the end of the day, only to awaken the next day more of the same. It's a fucking nightmare and I want to punch it right in the fucking face! 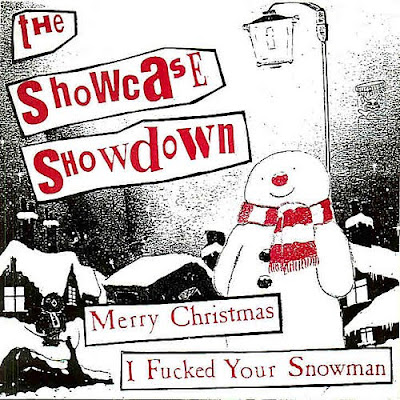 A recent seasonal classic to warm the heart.
For the past several years I've attempted to locate and compile "alternative" Christmas music to counteract the full-scale aural Yuletide torture and I've come up with a number of gems ranging from the funny to the irreverent, as well as songs that skip right past any hope of airplay by being incredibly filthy and venomous, many wielding precisely the same sentiments that I hold about the season. Notable examples of this sub-genre include Blowfly's "Jingle Bell Cock," John Valby's "I'll Be Stoned for Christmas," "Merry Christmas I Fucked Your Snowman" by The Showcase Showdown," and Larry the Cable Guy's ultra-short "The First Noel" sendup, "The First Queer Santy Claus" (complete lyrics: "The first queer Santy Claus/Wore red leather chaps/And a pair of white shorty-shorts/With a hole in the butt-crack"), but it wasn't until just last week that I finally found a tune that completely sums up exactly how I've felt about the entire Christmas experience since I was in my early teens. 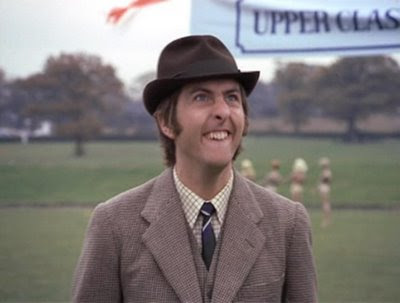 Eric Idle: apparently on the same page as Yer Bunche.
My lifelong of Monty Python and the six comedy geniuses who drove it is undeniable, but I'm kind of amazed that my new favorite Christmas song would come from none other than Eric Idle (seen above in the classic "Upper Class Twit of the Year" sketch from MONTY PYTHON'S FLYING CIRCUS), a very talented and funny guy but far from my favorite of the lot. Idle turned in many memorable bits for both Python's TV and movie work, especially in the song department, but for some reason he never lit my fire in the way that Graham Chapman or Terry Jones did. But whatever the case, he's responsible for the marvelous "Fuck Christmas," a tune seen performed live on the documentary MONTY PYTHON: ALMOST THE TRUTH (which I'll be getting around to reviewing in a few days). Seriously, this one is sheer perfection for seasonal curmudgeons like Yer Bunche. Here are the lyrics, which should be carved in stone and dropped right in the middle of Rockefeller Center, cracking a huge fissure in the ice rink and toppling the Christmas tree into the depths of the sewer:

Fuck Christmas!
It's a waste of fucking time
Fuck Santa He's just out to get your dime
Fuck holly and fuck ivy
And fuck all that mistletoe
White-bearded big fat bastards
Ringing bells where e'er you go
And bloated men in shopping malls
All going Ho-Ho-Ho
It's fucking Christmas time again!

Fuck Christmas
It's a fucking Disney show
Fuck reindeer And all that fucking snow
Fuck carols
And fuck Rudolph
And his stupid fucking nose
And fucking sleigh bells tinkling
Everywhere you fucking goes
Fuck stockings and fuck shopping
It just drives us all insane
Go tell the elves
To fuck themselves
It's Christmas time again!
Posted by Bunche (pop culture ronin) at Friday, November 27, 2009

Another great alt-Xmas tune is "Fist Me This Christmas" by the Wet Spots. Check out the video on YouTube and see if you don't crack up on the second chorus.