HAPPY THANKSGIVING 2009 FROM THE VAULT OF BUNCHENESS!!! 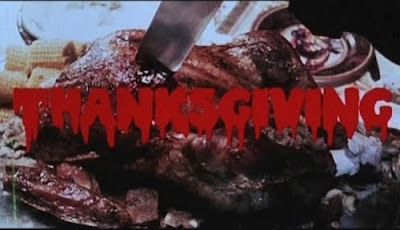 5. If your family gathering has a kiddie table, make sure to sit there and serve as a bad example to the next generation. Tell age-acceptable off-color jokes and stories. Teach the kids the lyrics to "The Diarrhea Song" (especially the version recorded by distaff punk/metal band Betty Blowtorch)and have them sing it loudly halfway through the meal. Introduce them to "pull my finger." In short, do your part to ensure your status as the fave older relative from the start; that way the kids won't feel so awkward in later years when they need somebody to take them to get an abortion or bail them out of jail without their parents being any the wiser. And believe me, they will pay back your "cool relative" kindness somewhere down the line.

And with that, Happy Thanksgiving, and may the pecans in grandma's cookies actually be pecans and not roaches. (She doesn't see that well anymore, you know.)
Posted by Bunche (pop culture ronin) at Thursday, November 26, 2009

Frosty the snowman was a jolly happy soul, with his dick a great big icicle and his balls made out of snooooww....