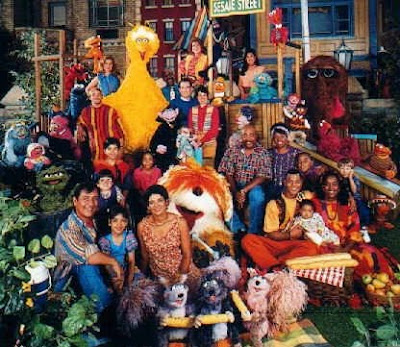 It's strange, but while many other things make me feel kinda old, the fortieth anniversary of SESAME STREET is having the exact opposite effect. The mere thought of that jaunty NYC neighborhood puts me in a happy place, just as it always has since I was four years old and it was brand spanking new. Though I may have outgrown its intended purpose as an educational tool, I still have a deep fondness for its characters and the good vibes it puts out, and if not for daily doses of SESAME STREET during a two-year period of unemployment I would not have had the proper infusion of positivity that kept me going during that dark time.

So I salute you, SESAME STREET, you and all your residents. Long may you reign, and I thank you from the bottom of my heart for being there when I needed you, both as a child and as a grownup. Oh, and Elmo? You are indeed a thing of wonder.
Posted by Bunche (pop culture ronin) at Tuesday, November 10, 2009