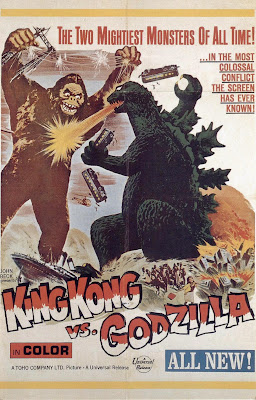 KING KONG VS. GODZILLA (1962) is one of those giant monster flicks that tends to polarize the faithful for a number of reasons, not the least of which being that the live-action Japanese Kong looks kinda like a burn victim duck in a tatty fur coat. Despite my down-to-the-DNA love of giant monster flicks, I have strongly disliked this movie since childhood (I won't go into it because that would mean wasting a post on a film beneath my vitriolic skills) and only bring it up to make mention of a question I've had about it since childhood.

Back in those pre-adolescent years during which I was first learning the lore of all things monster-related, the number one source for info on such matters was the legendary magazine FAMOUS MONSTERS OF FILMLAND, a publication that gave us monster-kids tons and tons of text and photos to fill our heads with (when not bombarding us us with truly awful bad jokes) and the photos we first saw within FAMOUS MONSTERS' pages would soon be seen in other sources since many of them were obviously studio publicity stills, meaning they were probably pretty easy to obtain. For those of us interested in the Japanese monsters, one of the most ubiquitous stills was the image from KING KONG VS. GODZILLA seen below: 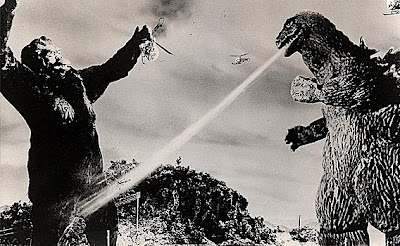 Um, is it just me, or does this look exactly like Kimono Kong's taking it square in the nuts from a blast of Godzilla's radioactive breath? I've seen a shitload of Godzilla movies and have consequently witnessed endless examples of Big G's irradiated halitosis blowing down buildings, setting cities ablaze and melting legions of government-deployed tanks like they were made of wax (truth be told, they probably were), so what chance did Kong's wedding tackle stand? And how did this publicity still get major press release without anyone making note of what is clearly a cheap shot to the nads? That question has haunted my mind at least since 1974, which may be one of the reasons why I have not yet bothered to get off my ass and solve the global warming crisis.

Special thanks to Glenn "The Jew" Greenberg for ferreting out a good-sized example of the still in question.
Posted by Bunche (pop culture ronin) at Thursday, November 05, 2009

I think you're reading the pic wrong....

It's obvious (at least to me) that the opposite is happening... Kong is shooting a powerful rope of ape goo directly into Godzilla's mouth. This was obviously a deleted sex play scene.

Hmmm... An interesting theory. I never thought about it that way before, and that wrinkle adds a whole new dimension of subtext to the film. Thanks, John!

Shots to either creatures junk shouldn't really hurt them. After all, if you look closely, neither of them appear to have any manner of genitalia whatsoever. Unless they have the ability to invert their unmentionables prior to engaging in combat. Quite a useful talent!

Jim, apes are not exactly known for their prodigious genital endowment, and when have you ever seen a lizard with a huge, swinging "meat and two veg?"