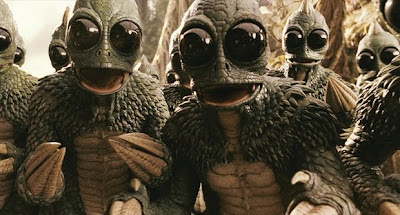 I don't know what you think, but I say the vast majority of feature films culled from old TV shows majorly bite the big one, so with that fact in mind, coupled with a general apathy toward the overrated comedic talents of Will Farrell, I gave the bigscreen adaptation of LAND OF THE LOST a miss during its bid for summer blockbuster supremacy. Considering how the movie was obviously replete with dinosaurs, sci-fi elements and lowbrow humor, all things that I usually enjoy, me skipping it confused the hell out of several of my friends, but even with my love of stories in which dinosaurs eat each other's heads and also chomp on hapless humans, I was never a fan of the 1970's Sid & Marty Kroft kiddie show that served as the movie's source material. The previous works of the Krofts did little to draw me in — with the hippieish Brit charms of Joy from THE BUGALOOS being a rare exception to that rule — and the dime store dinosaurs found on LAND OF THE LOST looked rather wan to the eyes of a nine-year-old already indoctrinated to the films of Ray Harryhausen (although I did give them props for giving stop-motion a shot on Saturday morning). Come to think of it, one of my grade school contemporaries at the time described the show's baby Brontosaurus character, "Dopey," as looking like it had been cobbled together from freshly chewed bubble gum. I thought that assessment to be more than a little unkind, but the show did bear an undeniably cheesy look and feel that helped to nearly bulldoze over such fascinating elements as Enik (a super-genius lizard-man in a dress) and the mystery of the Pylons, a series of semi-organic formations that served as controllable gateways through time and space (controllable provided you had a clue as to how to operate the damned things). But whatever my own feelings on the series, LAND OF THE LOST lives on in the hearts and minds of those who were there to experience it as it happened, and even its budgetary constraints could not quash its considerable imagination (something that can also be said of DOCTOR WHO back in the days).

So then came the inevitable movie version of LAND OF THE LOST, a film that was met with indifference at best from many critics and outright panning from others, to say nothing of a largely apathetic response from the moviegoing public, thus leading the film's box office receipts to fall short of its production costs. In other words, it bombed. I was surprised by that, especially when taking into account how brain-dead audiences have turned pieces of shit like EPIC MOVIE and PAUL BLART: MALL COP into box office champs. Then AIN'T IT COOL NEWS — a journalistic organ whose critical opinions I give virtually no credence — intrigued me by postulating that the movie's failure lay in the fact that it was improperly marketed, with the studio pushing it on a kiddie audience when the film's content was clearly aimed at a fifteen-and-up audience. Now that I've seen the movie on DVD I have to agree with AIN'T IT COOL NEWS. The bigscreen LAND OF THE LOST was in no way what either the general audience or the original TV show's fans were expecting, taking the show's main concepts and jettisoning nearly everything else to come up with a parody of the concept, what I would consider something like a comedic DOCTOR WHO story as done by Americans, only minus the Doctor and packing a huge special effects budget. 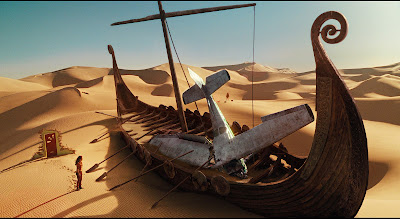 The Land of the Lost: an extra-dimensional dumping ground for all of time and space.

Disgraced scientist Dr. Rick Marshall (Will Farrell), his cute British field assistant and science groupie Holly Cantrell (Anna Friel), and white trash roadside attraction owner Will Stanton (Danny McBride) find themselves hurled through a warp in time and space that traps them in a bizarre inter-dimensional nexus where they encounter hairy and horny proto-human Chaka (Jorma Taccone) and a number of threats in the hostile environment that make nearly every waking moment a fight for their lives. The exact whys and wherefores of how they got there and their motivations once stuck in the Land of the Lost are utterly beside the point and merely serve as a springboard for wall-to-wall live-action (and CGI) cartoon gags, so if you're expecting anything other than that you're shit outta luck. Many of the old school LAND OF THE LOST purists that I know wanted a big-budget rehash of their beloved kiddie show and as a result did not care for the feature film, but when I mentioned all of the stuff that I enjoyed in the movie as a non-fan and an appreciator of a fun parody, they agreed with each item cited. Go figure. 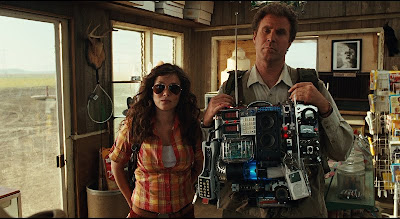 Holly and Dr. Marshall with the "tachyon amplifier," a device that opens a doorway to the Land of the Lost while blaring "I Hope I Get It" from A CHORUS LINE.

As stated, there really isn't much of a story but it's got it's moments, such as: 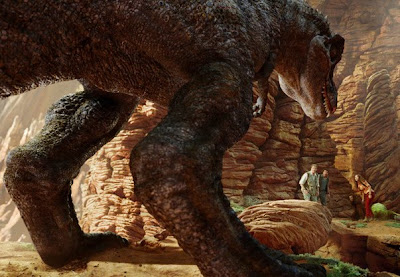 Grumpy, not at all amused by Dr. Marshall's ignorant trash talk.
So the bottom line is that LAND OF THE LOST is a fun time-waster of a live-action cartoon that succeeds well enough for what it tries to be and it's definitely more entertaining than the majority of feature films with their roots in old television properties. It's a perfect mellow stoner film with a decent amount of genuine laughs (I laughed out loud several times and was not stoned, BTW), wall-to-wall visuals of interest, a shitload of Sleestak (including Enik) and a terrific take on Grumpy, so I say give it a look when it's on cable or snag it on Netflix. 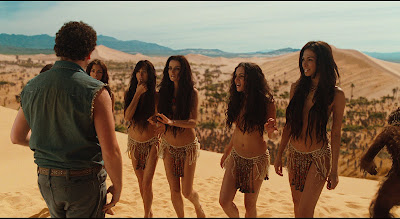 Well, then. I guess I have to see it.
--demonrock