When "horror kids" like me were raised on a steady diet of "classic" sci-fi and horror films, it was only a matter of time until we encountered an example of a movie where its poster was a hundred times more entertaining or scary than the movie itself. A perfect case in point is THE WASP WOMAN (1959, but released in 1960), one of the endless parade of zero-budget schlocky offerings that ran perpetually on Channel 9 during my youth. Usually run a week before or after the not dissimilarly-themed THE LEECH WOMAN (also 1960), this flick chronicles the would-be horrific tale of an aging cosmetics company's owner/founder Janice Starlin (Susan Cabot) and the results of her trying out an untested anti-aging formula composed from the royal jelly of wasps; the serum de-ages her by a good two decades, but the price to be paid is her transformation into a human-sized, extremely homicidal, well, wasp-woman. That's all well and good, and the film's poster depicted the title creature thusly: 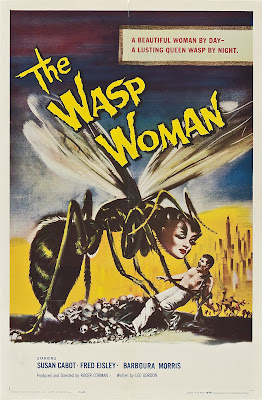 Poster cribbed from our kind friends over at Wrong Side of the Art.

Don't you just love that poster and all the potential it implies? How fucking disturbing would it have been to see some gigantic wasp with a beautiful woman's head running around killing people? It would have been completely and totally excellent, especially if handled by a stop-motion wizard like Ray Harryhausen — yeah, like that was gonna happen — but instead of that, here's what we actually got: 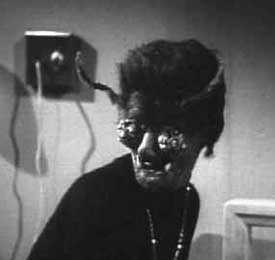 Basically an application made from what appears to be papier-mâché, a cheap wig and a couple of pipe cleaners stuck atop an otherwise unaltered actress's body (wearing whatever the character was dressed in before she "wasped-out"), the Wasp Woman would run into a room, buzzing loudly, and apparently rip out the throats of her victims. Even as a kid I felt she was a pretty feeble monster, but that point wasn't really driven home until I saw the poster during my college years. Then came the night during my stint at the barbecue joint when we ran the movie for a late-night drunken audience (I of course have the dirt-cheap DVD in my collection), and once the film reached its end there was dead silence, a silence broken when our tasty red-headed bartender Kate summed things up with, "What a crummy movie!!!" Yeah, THE WASP WOMAN totally eats it and is little better than a bottom-of-the-barrel episode of DOCTOR WHO from the pre-John Pertwee years, but it's definitely worth seeing for its utter craptacularness and for filling in a gap in your old school crappy movie education. Rent if from Netflix today!
Posted by Bunche (pop culture ronin) at Wednesday, November 11, 2009