What else can I possibly say regarding this one other than to state that this guy is going to be playing Peter Parker in the upcoming Spider-Man musical? 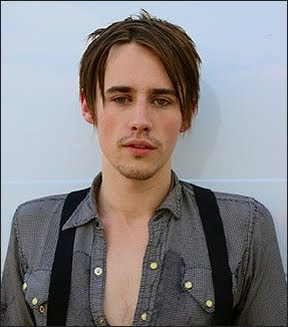 His name is Reeve Carney and he's the frontman for a band bearing his last name. I have no idea what kind of music this guy puts out there, but judging from the pic I'm betting on emo. Is this bit of casting a nod to the pervasive wussy emantions of TWILIGHT? I honestly don't know, but the details on this bit of casting can be found here. And, yes, I'm dying to actually see the show because it has all the earmarks of a trainwreck. I missed CARRIE: THE MUSICAL but I won't miss this one!
Posted by Bunche (pop culture ronin) at Tuesday, November 10, 2009

It must be perfect casting because you're acting like Flash Thompson.

Wow, and many have complained that Tobey McGuire was an emo-Spidey. (Though I never quite got that image with him).

But as for this clearly emo-inspired dude, I have no comment, because I'm still trying to process the words "Broadway version of Spider-Man."

Heard about this project three years agofrom my friend Dana who was asked by Julie Taymor to be the Celtic Witch in it. Supposed to be the mythological version/origins of Spiderman- whatever that means. Anyway,she declined.

Mayyyyyybe, if Julie Taymor is indeed helming the project, it might just be a batshit work of breathtaking genius - that being her stock-in-trade. I doubt it,though. This looks like a cash-grab and very little more.