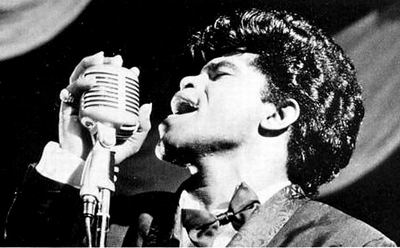 What can you possibly say about a Christmas morning where you wake up and the first news you hear is that James Brown is dead?

Those words echoed in my head, and I struggled to understand, the English language becoming sounds sans meaning as my mind attempted to process the impact of that statement. Sure, I knew the Godfather was but a mere mortal, but his impact on pop music in general — and R & B/soul/funk/hip-hop in particular — was as thermonuclear in scope as that of Elvis Presley and the Beatles, and when a titan falls the earth trembles.

Every newspaper, magazine, tabloid television show and damn near any other organ of mass information dissemination this side of HIGHLIGHTS FOR CHILDREN will cover the Godfather’s life in all of its legendary and occasionally sordid detail, so I won’t attempt to delve into that on this blog. Instead I’d like to remember him from my own perspective, namely that of a fan who was brought into his cult at the tender age of eight by my “tetched” elder cousin, Jimmy James.

Jimmy was a developmentally challenged man-child who often found himself in trouble for grabbing white women, and attempting to show anyone who might be interested the contents of his “jockey strap,” and I can’t even begin to imagine the torment of enduring adult urges as filtered through a defective mind. When I was a little kid and my parents took me to visit my mom’s side of the family in Alabama I was very creeped-out by Jimmy thanks to his touchy-feely leanings and gave him a wide berth, but was intrigued by his ability to sit in front of my nana’s old turntable and listen to its treasure trove of forty-fives for hours on end.

His tastes ran the gamut from trucker schmaltz like Red Sovine’s “Giddyup Go” to arcane “bump” numbers like the justly-obscure “Do the Funky Penguin” (I swear I didn’t make that one up), and anything else that might delight his kiddie-esque sensibilities, but every now and then he’d gingerly sift through the sleeveless stacks of polyvinyl, stop dead, and his face would light up like Santa had just handed him an all-access pass to the new amusement park, GROPE WORLD. He would consider the label for a moment — I later found that he identified the records by their colorful labels and not the titles since he had the most elementary of reading skills — and then place the precious disc onto the record player, switching it to the “on” position, and wait with baited breath for a song he’d heard uncounted times previous to begin. And when it blazed to life from the dinky speakers, he erupted from the floor and commenced a spastic dance of such gleeful, anti-Terpsichorean grace that he resembled an explosion in short pants.

During one such outburst the crazed rhythm, incomprehensible lyrics, and shrieked, marble-mouthed vocals spurred me to get over my uneasiness with my cousin and ask him just what it was that he was so in love with. He turned, looked at me as if for the first time and said, “Stevie, this is James Brown. He’s the Godfather, and I love him more than Elvis, Jesus, or Miss Dolly Parton and her big bubbles! You like him too?” I sheepishly admitted that I did, at which Jimmy exclaimed, “HOT PANTS!!!” and started that very record once more; the second time it played, I joined Jimmy in his thrashings, and from that moment on I felt I understood my kooky cousin a bit better. I had been somewhat familiar with soul and funk music, but the James Brown thing was something new and different for me, and with the exception of Funkadelic I felt that all others lacked that certain indefinable direct hookup to one’s funk motor until Prince started kicking ass, and he was quite obviously influenced by the Godfather (among others). So thank you, Jimmy James, and may some willing and kind young lady take the dare and peruse the contents of your jockey strap.

The next time I got kicked in the head by the Godfather was his bit in THE BLUES BROTHERS (1980) as a fervent Baptist reverend belting out “The Old Landmark.” Lemme tell ya, folks, I fucking HATE gospel music, but that segment is so kickass that even “de Debbil hisself” would leap out of his seat and boogie like he had three ounces of pureed habanero peppers stuffed up his pointy-tailed ass and sealed with a barbed butt plug. The whole soundtrack is pretty damned good but the Godfather’s track, and the one from Ray Charles (a cover of “Shake A Tail Feather” that somehow actually blows the original out of the water) make the album worth the retail price, just ignore the painfully white-a-tized version of “Sweet Home Chicago.”

We now skip ahead to the mid 1980’s and every motherfucker in the world sampling every motherfucking James Brown song in the world, swiftly building the monolith that we now know as Hip-Hop. The fact that many lesser talents (and some pretty decent ones) basically stole their beats from the Godfather pissed me off to no end, although I had to admit that if you were going to build something from material that you did not create yourself, you should work from the original clay, so to speak.

For some reason the James Brown chestnut “I Got You (I Feel Good)” saw a popular resurrection, and that planted his original music back into the immediate public consciousness, an unfortunate side effect of which was his appearance in the execrable ROCKY IV, and the hit recording of “Living In America” from the same film. Despite nearly three decades of manic, carnally-charged, virtually incomprehensible “race music” shriekings, his ROCKY IV performance was the first time I ever thought he resembled a mandrill on crack, supplemented by Carl Weathers dressed in a sparkly Uncle Sam(bo) ensemble that made him look like a total douchebag before stepping into the ring to face Dolph Lundgren’s Kal-El, er, Ivan Drago and die in order to keep the movie going. “Living In America” came off like a third generation imitation of a James Brown song as filtered through a de-funkification centrifuge, and made me realize that the Godfather’s best years were definitely over, be he “the hardest working man in show business” or not.

But James kept on keepin’ on, letting nothing stop him while embracing his status as a living legend, and I saw one of his shows in Bridgeport, Connecticut just before he got busted following the downright surreal, PCP-stoked, shotgun-wielding “private bathroom” arrest, and that show KICKED MOTHERFUCKING ASS. The guy was pushing sixty and yet dervished it up with the best of them, even pulling his signature cape bit, and that horrifying, nut-squashing split that makes even gymnasts wince, while an audience that crossed generations shook their money-makers, despite a ludicrous announcement from the venue’s management advising attendees not to dance in the aisles (yeah, right).

And when the arrest for the aforementioned PCP-stoked, shotgun-wielding “private bathroom” incident occurred, I didn’t fear for the Godfather’s safety in the joint one iota. I mean, think about it: who in their right mind, even if he were in fucking Attica, would fuck with James Brown? In a prison full of hard — and I do mean HARD — bruthas? Throwing James Brown into jail was like handing him the most loyal, lethal bodyguards imaginable, for free no less! I don’t mean to minimize the experience of incarceration, but you know what I mean; if you merely looked at the guy wrong, you stood a good chance of having your severed head used as stock for the beef barley soup in Emerald City, Jack!

When released, James continued much as before, only a bit wearier thanks to the ravages of aging, but still more dynamic in performance than many acts who could have been his grandbabies. My favorite latter day Brown moment had to be his guest spot on THE SIMPSONS, joining such august personages as Thomas Pynchon, Stephen Hawking, John Waters, and the Ramones in the land of 2-D shenanigans.

So rest well, Godfather. With your loss, only the continued existence of George Clinton and Bootsy Collins prevents old school funk from being officially defunct (no wordplay intended). 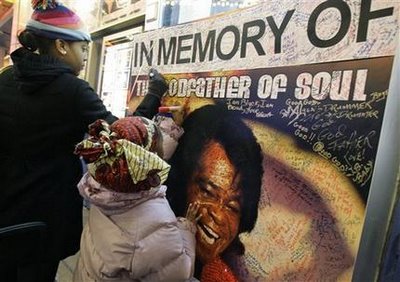 I always thought Eddie Murphy, back when he was funny, did the best imitation of him.

I'd also love to know why, in the poster pictured above, did they choose a relatively new photo of him for the memorial poster rather than an old one from his prime?

Wheres the justice in this world?

*sigh* Yep - the legends are dying off... with no one of stature to replace them. Popular music will be a graveyard before too long, and I don't see anything much but clowns waiting to bury the bones.

I felt much the same as you do when Link Wray passed a year or so ago. I saw him play live a few years back, and even though Link was pushing 70 at the time he still wore out a backing band a third his age - not to mention the audience itself! Critics can winge about "dinosaurs" in the music industry, but if there's anyone among the current crop of "artists" out there who's even fit to wipe the sweat off a Brown or Wray, I haven't heard about it!