SEASON OF DREAD: A BRIGHT SPOT

So I get home after a miserable, boring work day that dragged along at a sub-glacial pace and find a package outside my door. This was puzzling because it was not only unexpected, but it arrived on a Sunday...

I took it inside, read the shipping label and found no clue as to who sent it, so I carefully opened it and found the new hardcover collection "I Yam What I Yam," a handsome edition of the THIMBLE THEATER story arc that gave the world Popeye, the first of six volumes collecting this marvelously insane material. 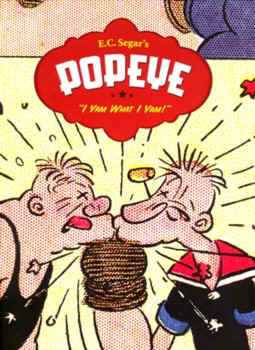 Fucking POPEYE, the first American superhero, and one of my all-time favorite characters in any medium. I love him without reservation, and relate to his personal philosophy on a deep level. I mean, what could be a more ahead-of-its-time existential statement than Popeye's oft-stated, "I yam what I yam and tha's all I yam?" No attempt at over-analyzed explanation, Popeye just IS, and that's all there is to it, and if you don't like it, then that's too fuckin' bad. If all you know of the sailor is his animated oeuvre, you have to read creator E.C. Segar's hilarious and frequently sick comics about Popeye to truly understand him; despite his gruff demeanor, Popeye is a simple, decent soul who is in many ways the perfect warrior as put forth in the code of Bushido, yet informal and earthy to perhaps an absurd degree. And while the comic strips flesh out this English-mangling nautical oddity, some of the lesser known lyrics to his timeless cartoon theme song spell him out in no uncertain terms, so for the benefit of those not in the know, here's the whole thing:

I'm one tough gazookus what hates all palookas
What ain't on the up and square
I biffs 'em an' boffs 'em, an' always out-roughs 'em
An' none of 'em gets nowhere
If anyone dasses ta risk me fisk, it's "Boff!," an' it's "Wham!," unnerstan'?
So keep good behavor, tha's yer one lifesaver
With Popeye, the Sailor Man

In short, he's a good egg who kicks the motherfucking shit out sonsabitches what deserves it, and he urges kids to be good. Now, THAT'S a hero I can get with!

So, to the glorious mermaid who totally flummoxed me with such a treasure, I extend my heartiest of "thank yous," and when next I see you, expect a very warm welcome indeed. And Popeye's dad, the esteemed Poopdeck Pappy, also dug mermaids — to the point of abandoning his son so he could live on a deserted island with six (!!!) of them — so we're on the same page.
Posted by Bunche (pop culture ronin) at Monday, December 11, 2006

Mermaid mail is far superior to USPS. (And you're welcome!)