A TIME FOR MODESTY 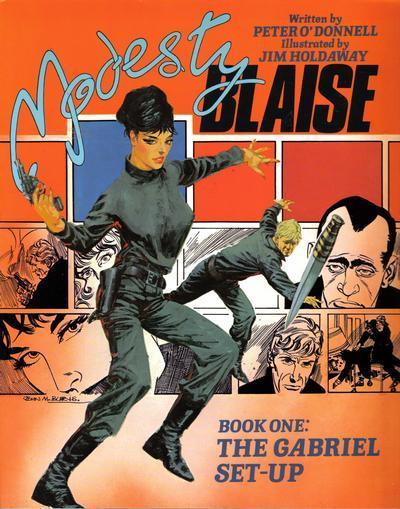 The 1960s. A time of great social change that affected all aspects of the international human experience and a decade in which the British wielded considerable impact upon the globe’s pop culture; music, film, television, fashion and literature all felt the influence of the British sensibility and an America that simmered with ready-to-boil civil/political/sexual/hallucinogenic madness fell victim to the spell of “Cool Britannia.” The post-Camelot Yoo Ess Uv Ay welcomed the Beatles, 007, ultra-foppish outfits that made the wearer seem either insane of quaintly fey, THE AVENGERS and a host of other notable lime-flavored diversions, but oddly one of the major groundbreakers of UK entertainment never really made its presence known over here. That MIA bit of fun was the daily comic strip MODESTY BLAISE, and considering its relatively adult content it’s really no surprise that it would never have flown in stateside papers at the time. And that, if you ask me, is a goddamned shame.

When it comes to tough and glamorous female characters of UK origin the one that immediately springs to mind for most Americans of a certain age is Emma Peel, the second and unarguably most popular partner of dapper, bowler-chapeuxed secret agent John Steed for two years on the cult classic TV series THE AVENGERS. Peel was smart, classy, dead sexy in a catsuit, resourceful and tougher than any man in the room and capable of handing the most daunting opponent with her highly stylized martial arts moves. Sounds cool, no? Well lemme tell ya, brother, next to Modesty Blaise Emma Peel has all the resonance and interest of a slowly screeching “squeaker” fart that fizzles out with a pitiful whistle from betwixt the vast butt cheeks of popular culture. I don’t mean to disrespect Emma but Modesty is the real deal (and besides, I like Cathy Gale better as Steed’s partner anyway). But I digress…

The MODESTY BLAISE comic strip, written and created by Peter O’Donnell and lavishly illustrated by Jim Holdaway, debuted in the pages of Britain’s The Evening Standard on May 13th, 1963 and introduced readers to the globe-hopping exploits of the stunning Modesty Blaise and her ultra-badass of a right hand man Willie Garvin, a pair of retired criminals with hearts of gold who once ran a crime syndicate called the Network. Having accrued considerable fortunes and desiring lives that didn’t entail potentially getting their asses shot off on a daily basis, the two take up well-heeled lives of leisure but it seems that no matter where they go the fates conspire to involve them in all manner of hard-hitting adventure and intrigue. Keen-minded highly trained strategists, fiercely loyal friends to those in need and just plain downright deadly, Modesty and Willie are a match for anyone misguided enough to rouse their ire.

Modesty’s origin is fraught with the sort of horrifying crap that either forges tungsten-like fortitude or destroys a person utterly, but even as an amnesiac child our heroine was a born survivor, enduring nomadic homelessness ranging from her escape from a prison camp in Greece during the waning days of WWII through years of wandering in the Middle East (aspects of which “influenced” Chris Claremont’s origin for Storm of the X-Men). The girl, whose name was a casualty of severe trauma, fell in with an old man named Lob, a professor from Bucharest, after she rescued him from an assailant in a refugee camp when but a waif of perhaps twelve years of age. Under his guidance the girl absorbed knowledge like a sponge, learned several languages, honed her survival skills and gained the nickname “Modesty” upon entering puberty, and to that she added the surname “Blaise,” garnered from the tutor of Merlin the sorcerer. During her late adolescence, Lob died and Modesty ended up in Tangiers where she began her criminal endeavors — which strictly abhorred drugs and vice — eventually happening upon rough-and-tumble diamond in the rough Willie Garvin who was earning a questionable living handing out Muay Thai ass-whuppings in the kickboxing ring in Saigon. Recognizing a potential asset to her organization, Modesty bought Willie out of jail with no strings attached and from that transaction was born one of the most unique relationships in adventure fiction. Modesty and Willie are soul mates and a perfect match in every way, as intimate as two kindred spirits can be and utterly willing to die for each other without a moment's hesitation, but, intriguingly, they are not lovers. 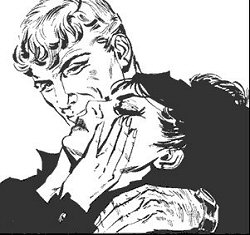 Their lack of a sexual relationship serves to magnify the intensity of their friendship, an unbreakable and deep connection that thrives and grows despite the presence of several significant romantic involvements for both characters, and their bond is fascinating to read about.

With all of this information, you are now ready to dive headfirst into Modesty’s harrowing world and I promise that you will not be bored. You have the choice of availing yourself to the comics or the even better series of novels penned by series creator O’Donnell, and you can’t go wrong with either incarnation.

Titan Books is currently collecting the strip in chronological order in an ongoing series of handsome trade paperbacks and despite some reproduction glitches inherent to the inevitable ageing of the source film, these books are exactly what your collection needs to give it a touch of class. The stories are entertaining as hell and are real nail-biters in many cases, especially the perverse “Uncle Happy” in the second collection and volume three’s “Top Traitor,” a tale in which Modesty’s high-ranking secret service pal Sir Gerald Tarrant goes missing and is assumed to be a mole for enemy interests. And as if first class entertainment weren’t good enough, the reprint volumes also provide fascinating articles on the development and history of the series, plus riveting interviews and reminiscences from the strip’s creator.

There are thirty-eight years and ninety-five serials to wade through, all written by O’Donnell and drawn by several artists (the John Burns run is stunning and inexplicably underrated), so Titan will be blessing us with volumes of this classic series for quite some time provided the current books do well, and I promise you that I’ll be on board for the long haul. Search all you want, but it is simply impossible to find a more cracking good adventure strip from the past fifty years than MODESTY BLAISE. If you haven’t experienced this phenomenon, then now is the time for Modesty. And you can trust your Bunche on that one, muthafukkas!

A couple of additional short notes:

1. In 1994 DC Comics issued a graphic novel adaptation of the first Modesty Blaise novel (entitled “Modesty Blaise”) drawn by comics legend Dick Giordano; it’s a perfect introduction to the character for those who don’t necessarily cotton to the daily newspaper strip format of the classic run and can be obtained with a little comic shop or internet sleuthing.

2. There have been two theatrical features based on Modesty Blaise and one 1982 TV movie; the 1966 Joseph Losey campfest MODESTY BLAISE is available on DVD and majorly sucks sweaty ass, so I heartily advise you to spurn it like you would spurn a rabid dog (Peter O’Donnell has been quoted as saying of the film “It makes my nose bleed just to think of it”). I have not seen the TV version but available reports are not favorable, and the 2003 MY NAME IS MODESTY: A MODESTY BLAISE ADVENTURE deals with the character’s origin — minus Willie since he was not a part of the years chronicled in this story, and that’s a big detriment to the whole feel of the series — and is pretty decent despite its slow pace and seventy-eight minute running time.

3. Some of the particulars of Chris Claremont’s origin for Storm in UNCANNY X-MEN # 103 are clearly “influenced” by the early years of Modesty Blaise; read that Marvel oldie and then read “In the Beginning” which is found in the tail end of the first Titan reprint volume and judge for yourself.

4. Perhaps the best-known “homage” to Modesty Blaise is Renny Harlin’s unjustly maligned 1996 thriller THE LONG KISS GOODNIGHT, which featured Geena Davis as an amnesiac housewife whose true self is revealed in an action film fan’s wet dream. Read some of the O’Donnell stuff and then see this film; you will be amazed by the similarities.
Posted by Bunche (pop culture ronin) at Sunday, December 03, 2006

When Modesty, walked into the sunset. I gave up the Evening Standard and moved away from London.