I have a friend who is the mistress of finding online personality quizzes that go all over the map, and the latest one she discovered tells you which famous superhero you'd be depending on your answers. Intrigued, I went to http://www.thesuperheroquiz.com/ and after I took the test, I came up as Iron Man. 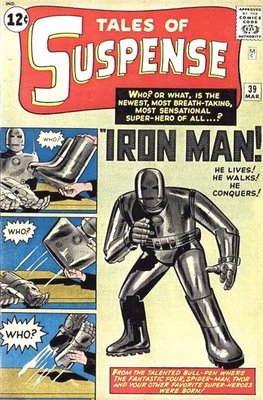 Fucking Iron Man?!? Sure the guy's been a cornerstone of the Marvel Universe since his first appearance back in March of 1963 (see above), even being a founding member of the Avengers (that's "Earth's Mightiest Heroes," not the oddball British secret agents), but he's also a major asshole. Tony Stark is a capitalist scumbag/billionaire industrialist whose primary thrust is munitions (sure, he comes up with a hover-Porsche or the occasional Quinjet, but he still makes most of his cash by engineering high-tech weaponry), a heart-breaking playboy (my fellow comics-geek Jared points out that while Bruce Wayne pretends to be a womanizer, Tony Stark has gotten more pussy than a litter box, thereby making Stark the real deal), and a bit of a domineering control freak, yet he manages to bend over and get willingly pooched by the government at the drop of a hat. 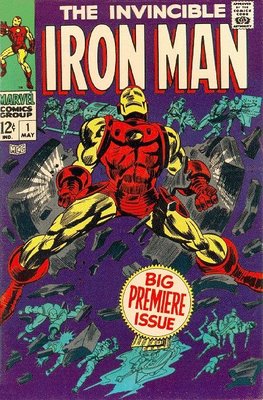 And while I have to give Stark props for his dozens of armors that can handle just about any imaginable contingency (my favorite being the "classic" version seen above), what kind of genius gets liquored-up, straps on what amounts to a tactical assault aircraft and goes flying about firing off repulsor rays and attempting super-feats? Unadulterated hubris, sez I. I've done my share of stupid shit while bombed, but I was never once tempted to pick up a McCullogh chainsaw and attempt to replicate my favorite HUSTLER centerspread as an ice sculpture after downing a tumbler of Maker's Mark. Stark's batttle with the bottle was indeed a compelling story arc, one of only two times in all my years of comics reading that I followed Iron Man's adventures religiously. 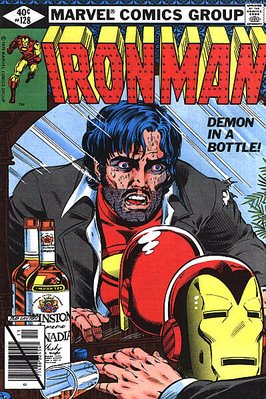 And while Stark may have conquered his alcoholism, he has had no such success at conquering his assholism; his actions in Marvel's current "event" series, CIVIL WAR, are nothing short of appalling as he reveals himself to be a thoughtless fascist who pisses all over civil rights, violates the Constitution, and sells his colleagues in the super-human community up the river to a maximum security prison in another dimension if they don't sign up with the government's superhero registration act. The oily, Svengali-like bastard even convinced perpetual innocent Peter Parker to out himself on live national televison as Spider-Man, for fuck's sake! Technically, that act of staggering stupidity falls squarely on Peter's shoulders for going along with it, but you know what I mean.

So the bottom line is: I have always considered Iron Man to be a douchebag, and I'm going to have to figure out where I went wrong to end up with him as my super-heroic avatar. I won't lose any sleep over it, but... Oh, and take the test for yourself and write in with your results. Hey, I'm a nosy motherfucker!
Posted by Bunche (pop culture ronin) at Tuesday, December 12, 2006

I just took that quiz and came up as Iron Man, too. I'll leave it to you to sort out the implications.

I just took it and apparently I'm Green Lantern. Kind of a bummer since I always found Hal Jordan dull as dirt.

Just a guess, but you probably don't like gadgets as much as you indicated. Given the choice, would you pick martial arts expertise or powered armor?

i got green lantern as well. i think every guy wants spider man, but i'll gladly take a power ring and membership in the corps. as for being iron man, if i had to wear a metal suit, i'd prefer something from anime.
(roll eyes and commence groans).

In response to "J"-
you called it, I would absolutely take ass-whuppin' skills over a tech-tuxedo. I am such a Luddite...

First a moments defense of Iron Man. Much like Dr. Strange Iron Man's origin has him first as an asshole and then he is humbled by an injury, sees the light and becomes a hero. Iron Man was a hero for years and it has only been in the last decade or so (not that I've read much Iron Man in that period) that they've written him as an asshole if the writer so deems (as in Civil War not that I've read that either). They have Dr. Strange embrace his asshole roots much less often. Lots of other characters have been turned into assholes too (Batman anyone?).
Tony Stark is no asshole. He helped the USA all during the cold war defend freedom and our country. I don't see how this makes him an asshole. Should he have let us be overrun by commies? I sure that soldiers who used his weapons to stay alive think he's the bees knees.
Tony then gave up building weapons in the 80's as the cold war ended. He even went so far as to hunt down all the villains who used technology that was stolen from him. That's how great his guilt was that his tech was being used for evil (that was in the "Armor Wars" story which was also after my time. I should really quote some stories I actually read.)
In all the Iron Man stories of my youth he was never willing to "to bend over and get willingly pooched by the government at the drop of a hat." Just the opposite. Like most cliched businessmen he hated red tape and government bureaucracy. He also didn't want them controlling his technology. Iron Man was always the picture of the self reliant independent entrepreneurial American. USA! USA! USA!
I always liked Iron Man and thought he was one of Marvel's best heroes because he had more guts then anyone else. Keep in mind he has no super powers. All the powers he has are ones that he makes. Iron Man battles with villains and gods who are at the top of the super-powerd food chain. He has nothing in between him and a guy who can lift a mountain but a suit of armor he built himself. If it fails he's dead. Plus Iron Man has a bad heart and the fighting alone can kill him.
Batman is a millionaire industrialist who spends his fortune on a utility belt and training his body so he can get the better of the Joker and his thugs. Iron Man is a millionaire industrialist with a bad heart who built a suit of armor so he can go toe to toe with Thor. Who's the bad ass?
And why exactly do you hate Iron Man for being an asshole (which I contend he is not, Civil War aside) yet love the Submariner who is obviously an asshole (I think you'll agree with that characterization)?
Oh, and I came up as Superman. So I'll kick everyone's ass. Yee-hah!

The Flash: fast, athletic and flirtatious

I told them I was not athletic and not fast, so I don't know what the hell this quiz proves, other than the obvious fact that I am absolutely NOT like the Flash.
They should have a Super Villain quiz. Now that would be interesting!

Not Feelin' Clever said...
This comment has been removed by a blog administrator.
11:37 PM

Wonder Woman first and foremost,with Supergirl and the Candyass (You may know him as Spiderman) close behind. The fact that I was almost Peter Parker's alter ego sicks me out, but thankfully I get to rock the gauntlets instead.

In answer to Jared's question, I love the Sub-Mariner (yes, it's hyphenated!) because he's an outsider who's acting out of an admittedly psychotic urge to protect his people. Oh, and there is that royal entitlement assholism thing, too, but I side with him for his outsider status.

As for Stark, I have admittedly not read as much Iron Man as some, but I do recall him kowtowing to De Gubmint many times in my youth — though he did tell taht uber-douche Gyrich to fuck himself — and sure, he defended the USA from commies, butthey never scared me. After all, this is the YOO-ESS-UV-AY!!!

You think the Sub-Mariner's people would love him as much as they allegedly do if they knew he spent a majority of his time chasing after invisible, married, surface-dwelling chicks rather than, I dunno, making the (underwater) trains run on time?

"My water-train was 2 hours late today, but at least for the 75th fucking time, fucking Namor got to wreck half of fucking NYC after getting into a fight with the FF because he hit on the fucking Invisible Girl yet again (who, by the way, has been leading poor Namor on for all these years just to make that idiot Richards jealous. Bitch!)"

I'd love to write that story...

Did it has honest as the questions allowed me, and I can inform y'all I'm Spiderman.

I think the hopeless romantic did it.

I got Superman, which I can live with, although I think the powers of Jean Grey, Dr. Strange or Animal Man suit me more...

What can I say? I hardly think this test is scientific, Bunche. Perhaps you should create your own superhero alter-ego.

"I hardly think this test is scientific, Bunche. Perhaps you should create your own superhero alter-ego."
-Da Nator

Well, Nator, I already have one. My alter-ego is the Headsman, and some of you ladies out there know why. (And let me tell you, it was not easy finding a radioactive lesbian to bite me.)

I must admit this one took me by suprise.. I was expecting something else and but I am sure glad I'm not iron man as well...could I be the only Hulk out there??? nah...no else wants to admit it, thats all...It's good to be GREEN...

Yeah, I mean Spider-Man. I just like saying "Spider-Ham". I'm even working up lyrics to a Spider-Ham version of the Spider-Man cartoon song.

I was really hoping to be Batman...

Steve, would it be any consolation if I said that in my opinion, you're much closer to the Badger? Minus the multiple personalities, of course.

I knew I shouldn't have played with that uranium science kit as a kid...