I just sat through Shin Kyûseishu Densetsu Hokuto no Ken: Raôh den - Jun'ai no Shô, and here's my two cents-worth on it. 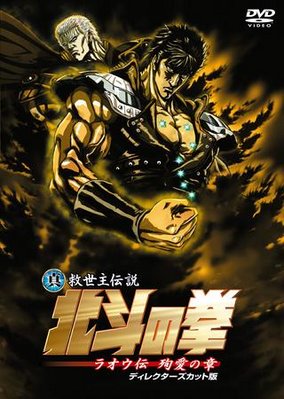 Continuing the trend of reviving classic anime, this new HOKUTO NO KEN (FIST OF THE NORTH STAR) installment has a modern look and feel, and even with the addition of some new characters and continuity details not present in either the television series or feature film from two decades ago, the story is rather faithful to the source manga. However, a major problem with the film is its dependence upon the viewer having a pretty thorough working knowledge of the complete comics saga — all twenty-seven collected volumes of it — which leaves the uninitiated moviegoer pretty much shit outta luck.

The story more or less takes up where the previous theatrical feature (from 1986) left off, and finds the paths of the three North Star brothers, Raoh, Toki, and Kenshiro, converging to take on the empire of Souther, an unspeakably cruel despot from the rival Southern Cross martial discipline who enslaves children and forces them to build a huge pyramid. Also drawn into this conflict are Shuu, a benevolent and blind Southern Cross master who sacrificed his eyes years earlier in exchange for allowing the potentially dangerous Kenshiro to survive (it's way to complicated to go into here, and is given very short shrift in the movie anyway), and Reina, a female general in conqueror Raoh's army who carries a torch for the big guy. The main thrust of the story centers on the inevitabilty of Kenshiro's throwdown with Souther, and in the course of getting to that we are treated to a few fights of the type for which this series is famous, and some grade school-level soap opera involving Reina's love for Raoh.

That's pretty much it in a nutshell, and while it's fun for those of us familiar with the sometimes unmanageably sprawling martial arts/superhero epic, it can be a bit confusing to those not in on it. In order to provide the neccessary exposition to fill in information gaps such as just what the characters' super-powers and allegiences are, to say nothing of motivations that were spelled out over hundreds of pages, would have elevated the film's running time to a good three hours, and the narrative of this film is shoehorned into roughly seventy minutes (the television version of this story arc covered roughly twelve episodes, and used that time well to get into the character's heads, build suspense, and stretch the final confrontation out over three installments).

This series is notorious for how few female characters are present, and those that are there exist solely to be rescued, raped, or killed. Reina is presented as a fighter whose mettle is worthy of her status as one of Raoh's generals, and when she is introduced we see her hand out ass-whuppings like they were Halloween candy, but halfway through the film she rides off to find Kenshiro, and is promptly waylaid by a squadron of Souther's soldiers. We don't see what happens after that, but when next we see her, Reina is in pretty bad shape, apparently having survived a gang rape; this is merely alluded to, and there is no explanation as to why the soldiers let her go, or if she killed all of them and was in a state of both exhaustion and shock from having to deal with their sheer numbers. After that, Reina recouperates, rejoins Raoh on the battlefield, rescues a mewling infant and gets ventilated with a dozen arrows for her efforts, declares her love for Raoh, seemingly dies and is healed (a common occurrance in this series), and finally leaves to return to her homeland and await Raoh. As happened with the only other warrior woman in the series (Mamiya, who didn't make it into either of the features), Reina's warrior skills are rendered null and void when her feminine characteristics come to the fore, and once she shows a loving nature and concern for a baby, she no longer has a place in all of the manly action and becomes a boring old girl. Any way you cut it, it's confusing and disappointing.

Souther comes off as merely an arrogant, sadistic prick with no real reason for being as evil as he is, and that's a shame because his back story in the comics, once related, is truly tragic, and he gives up all human feeling and compassion out of a very deep sense of grief over unwittingly murdering the only person he ever loved. There is no explanation of this whatsoever in the film, and that lack of info reduces Souther to nothing more than a kung fu version of a mustache-twirling Snidely Whiplash stock bad guy.

Toki doesn't have much to do in this chapter — his set-to with Raoh is up next, so that's okay — but Raoh is played as the misguided power-tripper of the manga, and not the over-the-top pseudo-Vader of televison and the earlier feature, and that's the character who fascinated me in the first place. He's not evil, he just let his quest for power blind him to much that was going on in the big picture around him, and it's a very pleasant surprise to see his complexities accurately brought to life.

The nuclear war that provides the desolate setting is given a bit more background here, being shown as a steadily escalating series of military conflicts around the globe rather than the instantaneous result of a drunken madman pushing THE BUTTON,
thereby becoming one of the few elements of realism ever to make its way into this story. But the weird thing about that is that it's been previously established, in both the comics and the film itself, that the nuclear exchange happened all of a sudden, even catching an adult Toki off guard and afflicting him with radiation poisoning, yet we see a flashback of the very young North Star brothers years earlier leaving their homeland to get away from the obvious nuclear devastation. ??? Well, whatever; in order for civilization to have taken the precipitous nose dive into the outright savagery seen throughout the series, there would have to have been at least a decade or two of events leading to that, so I'll overlook the self-contradictory plot points.

The real selling point here is the fabled ultra-violence, and while there is plenty on hand, the film is curiously much more restrained than the film and TV adaptaions now two decades old. The Japanese have always been generous with the blood and gore, so why not go overboard with a contemporary FIST OF THE NORTH STAR cartoon? The original broke much ground as to what could be gotten away with in entertainment geared toward kids, and was highly controversial even in Japan, but now the series is seen as the venerable progenitor of the slew of hyper-violent comics, cartoons, and video games that followed in its wake, so the relative restraint shown in the new film makes not one lick of sense. Kenshiro's final showdown with Souther was a classic, both on paper and on television, but the version seen here lacks much of its visceral punch.

For us geeks, there's a real jolt when Kenshiro recovers from a near-fatal beating and lays waste to some of Souther's army; the ass-whuppin' is no surprise, but it's accompained by a new version of the deathless and rockin' TV theme tune, complete with the famous "You Wa Shock!!!" battle cry. I got a chill up my spine when I heard it, and for those of us who watched this stuff when it aired in the mid-1980's, that music was a guarantee that Ken was gonna eliminate some motherfuckers who needed killing with extreme prejudice, which is exactly what happens here.

But the bottom line is that the film is a fun way to waste seventy minutes, even if it does feel like you walked in about two thirds of the way through the picture (which you kind of did), and is a marked improvement over the abysmal straight-to-DVD trilogy from a couple of years ago. That's a good sign since there are two more theatrical features and three made-for-DVD followups in the pipeline, and I can't wait to see them. Just ratchet up the martial arts violence another few notches, please!
Posted by Bunche (pop culture ronin) at Monday, December 18, 2006

Hey, no argument from me!

I gotta get this!

I am a lover of this series. One day I hope to play a game that truly captures the essence of this series. At first I thought that it was that Hyper-Ass kickings that drawed me to this series, however, I later learned that it was the artists rendering of the world that holds me. Plus, I loved the DnB in the Animated series that was dubbed for USA.

You did an excellent job explaining this movie. ^_^ Thank you greatly for that.

I have one question, though. Do you know when the next movies will be released?