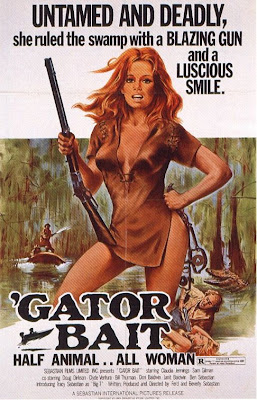 No, that isn't Ben Affleck in drag.
I can’t believe it took me as long as it did to finally see the 1974 exploitation classic ‘GATOR BAIT, and I have to say I’m more than a little surprised by what it had to offer. The film’s rep rests squarely on the shoulders of its star, ill-fated Titian-tressed beauty Claudia Jennings, a former Playmate of the Year whose body of work lead her to being dubbed the “queen of the B’s,” and after sitting through one of her grindhouse epics it’s doubtful that she’d fade from the viewer’s memory any time soon.

Claudia Jennings: can you say "Yowza?"
‘GATOR BAIT is a post-DELIVERANCE backwoods revenge pic that takes place deep in an unnamed bayou, a forbidding environment best avoided by those who don’t know its ways, and utterly at home in this seemingly limitless swamp is Desiree Thibodeau (Jennings), a barefoot Cajun trapper — in the skimpiest of outfits, including a pair of Daisy Dukes that pretty much doesn’t have an ass, and a potato sack blouse that allows occasional glimpses of her mouth-watering ninnies —who poaches the local wildlife to provide for herself and her younger brother and sister. Desiree’s activities are illegal but overlooked by the local sheriff who doesn’t care because her family has hunted the swamp for generations, so he figures she’s got the right by virtue of ancestral territory. Unfortunately his moron of a son, apparently the town’s only other cop, has other ideas, and along with a slow-witted hillbilly pal he lays in wait to catch Desiree in the act and offer her a choice of going to jail or fucking him and his buddy. The would-be sexual extortion goes terribly wrong, however, as Desiree eludes her pursuers after lobbing a bag full of poisonous snakes onto their swamp boat; as the stupid cop shoots at the snakes, he blows holes into the boat’s hull, and shoots his homeboy in the head. Panicking, he returns to town and claims Desiree killed his friend, so the sheriff rounds up the dead guy’s outrageously inbred redneck relatives and sets off into the deep swamp to apprehend Desiree. Operating under the false impression that the poacher is a murderess, the rednecks can’t wait to get their hands on her, both to hand out their own brand of justice and get a piece of her “coon-ass.” (The Cajuns in the film are derogatorily referred to as “Coonies.")

That’s the setup, and from there viewers are taken deep into a swamp virtually untouched by man and made witness to a game of cat and mouse so overmatched that it’s like what would happen if a bunch of great white hunters had the incalculable stupidity to fuck with Tarzan on his own turf. Desiree may not have the jungle lord’s near-superhuman capabilities, but she’s plenty smart and knows her way through the bayou like it was the back of her own assless shorty-shorts, so it’s just a matter of time until she’s done killing those assholes one by one.

During the course of all of this we learn a lot about Desiree’s antagonists and swiftly realize just how vile and sleazy they are. The patriarch of the redneck family has a love/hate relationship with his sons, all of whom are at least mildly retarded or just plain mentally ill, and even disciplines the perpetually-horniest of his brood with a bullwhip when he catches the lad attempting to fuck his own very willing sister in the mud near where she was hanging the laundry. (Dad wasn’t all that pissed off about the boy wanting a piece of sis, but was seriously irked at the possibility of the voluptuous girl getting knocked up and squeezing out another dimwit.) The other redneck son holds a personal grudge against Desiree for having had the gall to cut off his balls years earlier when he tried and failed to rape her, and now wanders about with his sawed-off double-barreled shotgun serving as an ever-rigid and potent surrogate penis. And even the sheriff has a big secret: twelve years previous he’d had an affair with Desiree’s mom and “accidentally” murdered her father, a bit of information used by the rednecks as blackmail fodder, guaranteeing that their own illegal shenanigans go unchecked.

With all of this mishegoss going on there’s plenty of bad taste to go around, and once the hunt for Desiree gets underway things go from very bad to that much worse when, after searching for her home for days, the inbred posse locates the place just after our heroine has left on a three day hunting trip. The bad guys stage a home invasion that begins with them abusing Desiree’s tongueless little brother, and her nubile jailbait sister ends up in the lusty hands of the sheriff’s son and the two inbred brothers. As the two uncastrated men hold down the poor girl during the preamble to a gang rape, one of them tells the nutless wonder with the shotgun that he’s going to show him “how a real man does it;” that remark sends the castrato over the frustrated edge, so he throws his brother off of Desiree’s sister, stuffs his shotgun between her legs, and unloads both barrels, retorting “Is that manly enough fer ya?” The girl expires almost immediately, and the misogyny factor goes through the roof. No bullshit, when that bit of business happened I actually exclaimed “Oh my God!!!” and I’m pretty hard to shock. It’s not graphically depicted, but the idea alone really gets to you.

The odd thing about it is that such horrors were once commonplace in exploitation films, and yet, despite the many ultra-violent movies I’ve sat through over the decades, I still find myself jarred by such material. I can handle all manner of cinematic carnage, but the idea of some innocent girl — or any girl at all, for that matter — taking a shotgun blast to the cooter is a bit beyond the pale, so keep that bit in mind before sitting down to watch ‘GATOR BAIT with your girlfriend.

Which brings me to the oft-cited sentiment that ‘GATOR BAIT is one of many exploitation flicks held to be a feminist statement. Lemme tell ya, buddy, the makers of this film simply set out make a movie about a scantily clad hottie who kicks ass on the people who fucked with her and her family, but I strongly doubt that capital F feminism was intentionally involved in the creative process. Think about it: you have fine-ass Claudia Jennings, a woman for whom the wearing of clothing should have been a capital offense, traipsing about the fen in gear that shows off her priapism-inducing assets for all they’re worth, despite the fact that such gear is in no way conducive to the rigors of marshland hunting and trapping. 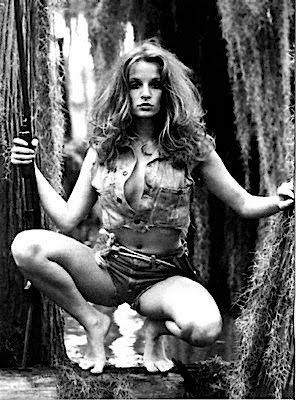 Desiree is not so much a feminist role model as she is a fantasy wild woman/jungle girl updated and transplanted to a sweltering southern bayou, and as a lifelong fan of such characters I have no problem with that. But don’t hand me that feminist over-analysis horseshit; Desiree’s a forest spirit fantasy made flesh — hell, she even looks like an anthropomorphic fox — and to say otherwise is a tad disingenuous.

Other than the surprisingly taut story, the true surprise about ‘GATOR BAIT is that considering its R rating and the presence of Jennings, the star doesn’t get naked at any point in the movie. Sure, we get tantalizing glimpses of her good stuff, but the requisite nudity for this type of flick falls to her nymphet sister who innocently strips out of her already-revealing shift and bathes in the river. That somewhat disappointed me because I’d seen provocative shots of Claudia Jennings in her Daisy Dukes and unbuttoned sleeveless shirt for over three decades, and expected the film to deliver what the ad campaign couldn’t. 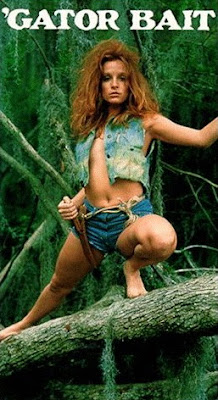 But I wasn’t terribly pissed because she looked great throughout the movie, and sometimes titillation is better than in-your-face nekkidness, and the movie kind of reminded me of pinup art or Al Capp’s Wolf Gal.

Bottom line, ‘GATOR BAIT is definitely worth checking out, and is a lot better film than you’d expect from the “hicksploitation” genre, capably holding it’s own alongside the real heavy hitters of its ilk, namely DELIVERANCE and SOUTHERN COMFORT. It’s solid, down-home, grimy sleaze, and as such it works just fine. TRUST YER BUNCHE!!!
Posted by Bunche (pop culture ronin) at Sunday, November 18, 2007

Thanks, bunch. I agree wit'choo. In the grand tradition of grindhouse sleeze, this one's always been one of my favorites, not just because it delivers on most of its lurid promise, but because it's a well-made low-budget film.

This is a great site, Bunche and may I commend you? I can't rise to your writing level, but "Gator" is worth your efforts. I was driver dad at the driveins with the neighborhood kids who would run rampant and attack the snack bar while I watched these epochs. Thanks for the reminder...le-idiot