OH, FOR FUCK'S SAKE!-CAPITAL PUNISHMENT OVER THIS???

I'll just let this one speak for itself. From this morning's New York Post:

'BEAR' ASSES JAIL TEACHER
SUDAN: 15 DAYS FOR WOMAN WHO MADE A 'PROPHET' ON TOY
By LUKAS I. ALPERT 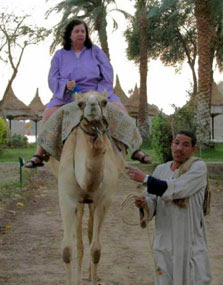 BEASTLY 'JUSTICE':Gillian Gibbons, here getting a bumpy ride in Sudan, was sentenced for the "crime" of insulting Mohammed.

November 30, 2007 -- Thousands of Sudanese, many armed with clubs and knives, rallied today in a central square and demanded the execution of a British teacher convicted of insulting Islam for allowing her students to name a teddy bear "Muhammad."

The protesters streamed out of mosques after Friday sermons, as pickup trucks with loudspeakers blared messages against Gillian Gibbons, the teacher who was sentenced Thursday to 15 days in prison and deportation. They massed in central Martyrs Square, outside the presidential palace, where hundreds of riot police were deployed, although they did not attempt to stop the rally. "Shame, shame on the U.K.," protesters chanted. They called for Gibbons' execution, saying, "No tolerance: Execution," and "Kill her, kill her by firing squad."

The women's prison where Gibbons is being held is far from the site, as is the Unity High School where she taught, which is under heavy security protection.

Gibbons, 54, had faced 40 lashes and six months in prison if she had been found guilty of the more serious "crime" of inciting religious hatred. A spokeswoman for Britain's Foreign Office responded to the verdict by saying, "we are extremely disappointed." "The Sudanese ambassador will be called in this evening to explain this decision," she said.

The protest arose despite vows by Sudanese security officials the day before, during Gibbons' trial, that threatened demonstrations after Friday prayers would not take place. Some of the protesters carried green banners with the name of the Society for Support of the Prophet Muhammad, a previously unknown group. Many protesters carried clubs, knives and axes -- but not automatic weapons, which some have brandished at past government-condoned demonstrations. That suggested Friday's rally was not organized by the government.

A Muslim cleric at Khartoum's main Martyrs Mosque denounced Gibbons during one sermon, saying she intentionally insulted Islam. He did not call for protests, however. "Imprisoning this lady does not satisfy the thirst of Muslims in Sudan. But we welcome imprisonment and expulsion," the cleric, Abdul-Jalil Nazeer al-Karouri, a well-known hard-liner, told worshippers.
"This an arrogant woman who came to our country, cashing her salary in dollars, teaching our children hatred of our Prophet Muhammad," he said.
Posted by Bunche (pop culture ronin) at Friday, November 30, 2007

Hmmmm, calling for a woman's death for naming a Teddy Bear, Muhammed....

Gee, and you wonder why Muslims get a bad rap as being fanatics?

The thing that sucks is, lunacy like this merely reinforces the Right Wing assholes in our government into thinking their course of action is correct.

I guess this is what happens when you stop progressing sometime around the 7th century.

Head down below the Mason Dixon line and take J*s*s' name in vain and you'll get the same treatment. They would LOVE to punish the sinner who dare defile the name of da Lawd. Americas problems with religion are just under the surface, papered over with a flimsy set of 18yh century Enlightenment and 4th century BC Athenian laws. It was only 300 years ago that Methodists outlawed Baptists in Virginia, killing them in mobs...

"It was only 300 years ago that Methodists outlawed Baptists in Virginia, killing them in mobs..."

Well, in fairness to the Methodists, those Baptists were a bunch of troublemakers...