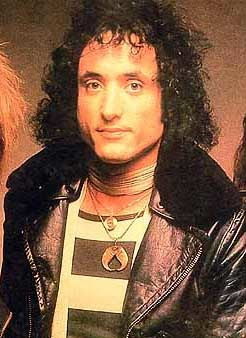 I could never stomach "pop" metal, but if you're of a certain age you probably remember when it was ubiquitous on the airwaves and you also probably recall the balding frontman of L.A. band Quiet Riot, Kevin DuBrow. He'd sometimes don the outfit of the band's mascot in concert — straight jacket, iron mask — and screeched like a monkey, two acts that left an indelible mark on the memories of those who banged their heads in the 1980's. 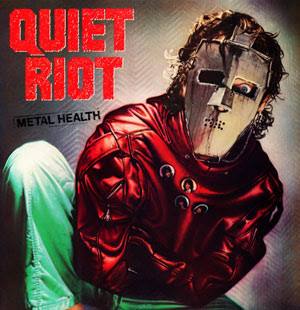 Quiet Riot's 1983 album "Metal Health" was a huge fucking hit for no adequately explained reason, other than the possibility that young music fans desperate for metal didn't really make an effort to explore the genre past what was played on the radio or MTV, instead shelling out their paper route money for soon-to-be-classics of frat boy rock like "Bang Your Head (Metal Health)," shrill covers of Slade's "Cum On Feel the Noise" and "Mama Weer All Crazee Now," and the one song of theirs that I actually kind of liked, "Slick Black Cadillac." But after their meteoric rise Quiet Riot fizzled out like a bad fart, largely due to their fifteen minutes being up and DuBrow's famous mouthing off about other metal bands, his diva leanings eventually leading to his firing from the band. In the 1990's Riot rose from the rock 'n' roll grave, but lightning didn't strike twice.

DuBrow was found dead yesterday in his home, and the cause of death is undetermined at this time.
Posted by Bunche (pop culture ronin) at Monday, November 26, 2007

I hope he checked out the respectable has-been rock star way and ODed on heroin or blew his brains out all over a poster of "Metal Health"...

Perhaps he hung himself while wacking off (my second favorite celeb suicide method) or drowned in his own toilet (my personal fave)...

Hey guys - don't be such assholes. Maybe it WAS just good music to some people. Maybe someone thinks what YOU call "real metal" is bullshit too. Right? To each their own. Metal has had all types and sounds, and I've always felt that was a great thing. Oh - and lastly...maybe...he was a cool human being to boot. Yes - QR's music was a sound that meant something to obviously a LOT of people out there. So u weren't one of 'em. Who really gives a shit? Does anyone write anything about u?