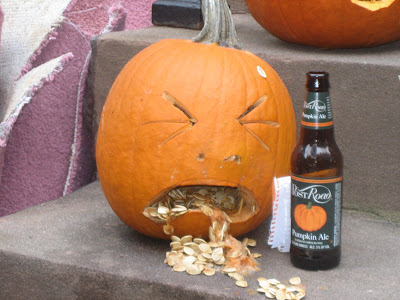 The big day finally arrived, but while I had planned to run around at the Greenwich Village Halloween parade and hit Christopher Street afterward, my plans were altered at the last minute to accomodate a friend coming in from out of town. The esteemed Lanei Rodemeyer, a philosophy professor at Duquesne University and close friend for around a decade, arrived on Halloween itself, so due mostly to time and travel constraints I had to readjust my plans to stay local in good old Park Slope.

After an unusually lackluster meal at 200 5th — a restaurant whose fare is often quite good, so I guess they were just having an off day — Lanei, our pal Suzi and myself sauntered over to the Gate, a Fifth Avenue bar that's pretty much a licence to make money due to how it's nearly always packed. There we found our first batch of costumed loonies, a welcome sight after a day that mostly yielded no New Yorkers in questionable getups and instead registered an air of anti-Halloween apathy. (Hell, there were a couple of non-fatal shootings in Manhattan that night, and my little band of wanderers even witnessed some kind of hoo-haa involving a throng of tweeners getting into some shit that required the attention of several squad cars, so who knows what was in the air?) We were also soon joined by my apl Jessica, an oft-mentioned character here at the Vault, and as we had a few rounds of drinks we checked out the decked-out.

The first person to catch my attention was this guy in an excellent homemade Luke Skywalker in X-Wing pilot gear outfit. 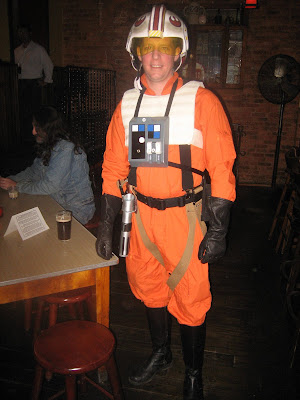 After the ride to Hell in a flaming septic tank that was the CAT IN THE HAT movie, I was amazed to see anyone rock the Thing #1 and Thing #2 characters, but these two assured me it was all about the book, so they are spared execution. 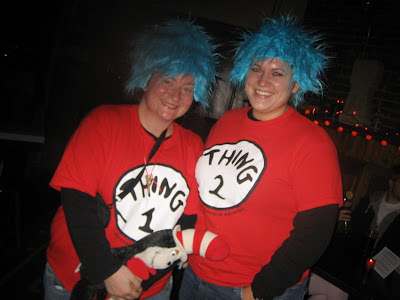 Easily the strangest couples costume combination of the evening, here we have a sexy version of Hogwarts' own Hermione Granger, accompanied by the Man With No Name (that's Clint Eastwood for those of you not in the know on Sergio Leone westerns). 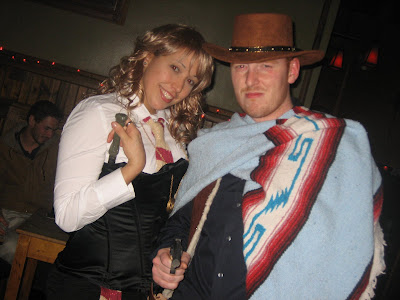 Then came this assortment of scurvy critters, lead by that most timeless of Halloween standards, the bar-hopping pirate. 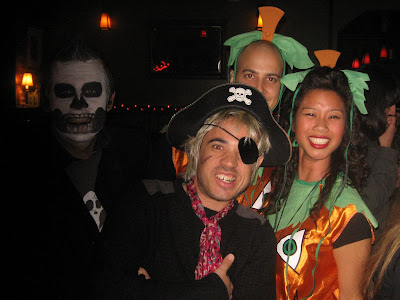 Among this crew was a bald dude in pumpkin drag, followed about by two chicks in bald caps. When I asked them what they were supposed to be, they pointed at baldie and said, "We're that guy! The work version, and the casual!" 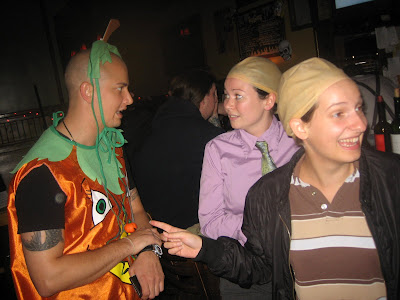 Then myself and the trio of lovelies I was with were chatted up by a handsome twenty-something from Dubai who began the conversation by trying to convince all of us to go to the United Arab Emirates so we could party like nowhere else in the world. I mentioned that I thought alcohol was against Islam, but he assured me that nobody over there really gives a fuck, as long as you confine your imbibing to the clubs (can any of you readers confirm this?). The guy wasn't obnoxious, just a tad insistent, so we politely put up with his rambling ranting, but then he asked myself and Lanei if he had a drinking problem; he told us that he was on his sixteenth shot of whisky — it was about 10PM by this point — and considering how coherent he was, Lanei and I both told him he might want to take a serious look at his drinking. He then swore up and down that he only drank about three times a year (yeah, RIGHT) and that night was one of his yearly three. Anyway, we left him to consider checking himself into the Betty Ford clinic, but he followed me around for a while before deciding to head into Manhattan to a place called the Fat Black Pussycat, a name he found to be offensive to the overweight and people of color. 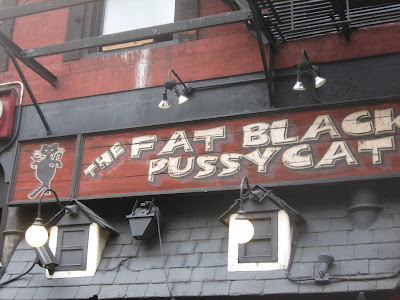 Offensive to drunken Muslims, apparently.
While following me around the Gate's outdoor patio area, we found a dog in a Darth Vader costume, so as I took its picture our dude from Dubai stooped to pet the friendly beast, so that's his hand on display. 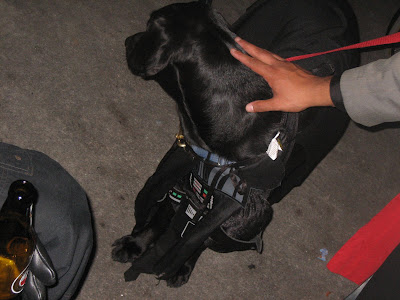 Along with Darth Pooch, there was an actual bipedal Darth Vader and an imperial stormtrooper. 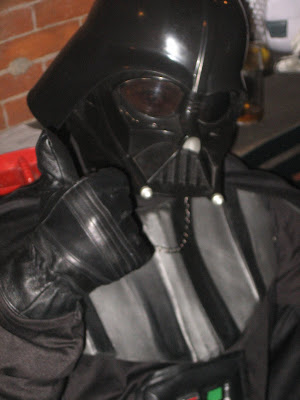 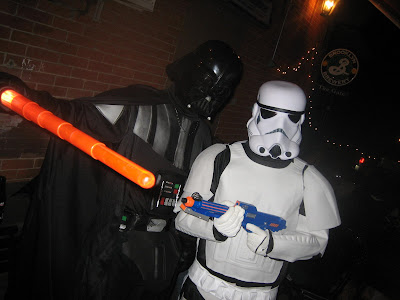 Here's another costumed quadruped, this time a bulldog in a shark suit. 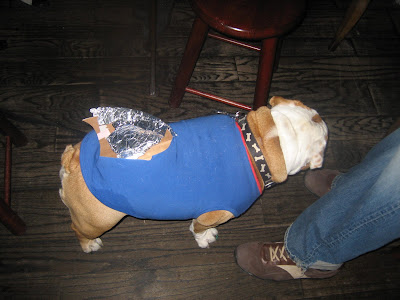 But my vote for best costume at the Gate goes to this Japanese chick as a piece of tasty sushi, complete with seaweed, roe on her head, and a huge pair of chopsticks on her back. 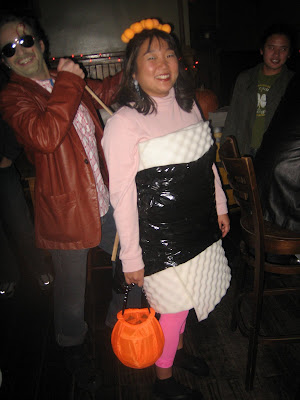 By about eleven Jessica and Suzi had to leave since they had work the next day — I'd had the presence of mind to take Thursday off — so Lanei and I dropped Suzi off at her place and made our way to the barbecue joint for what was sure to be a surreal finish to the night. On the way back to the Vault to change, we ran into this charming non sequitor rendered in shaving cream. 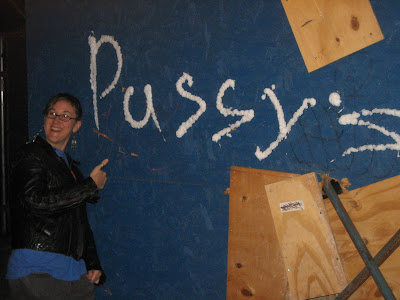 Well, it may make a modicum of sense when you realize it was just a stone's throw from Catty Shack, an excellent local dyke bar...

Back at the Vault Lanei and I assumed our late-night idenities, me as Bunchewolf and she as the victim of a vampire's bite, and hit the road to the barbecue joint. 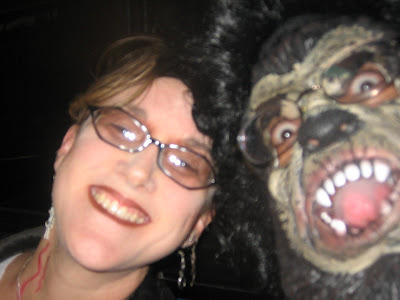 When we arrived we were psyched to find the party in full swing, Scott the bartender slinging drinks in his own inimitable Texan style and the place overrun with drunken, costumed nutcases. Pete S. represented as a sexy version of his corpulent, hairy self, 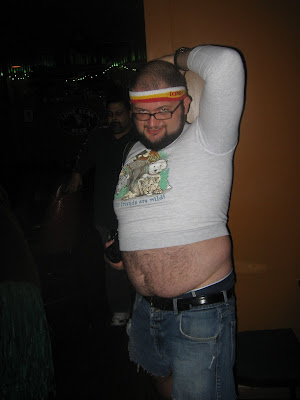 two lovelies rocked it as a bee 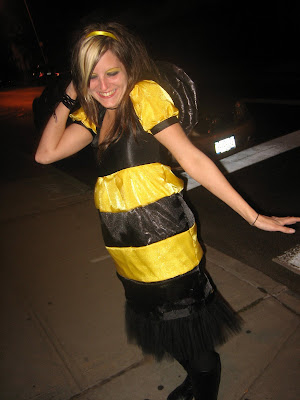 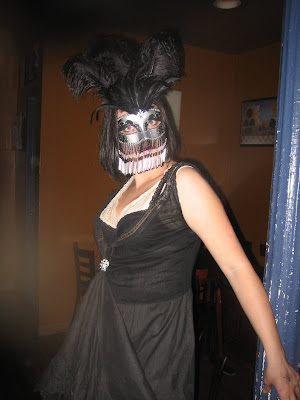 but everything fell into harmonious place when we ran into Sarah, the bartender's cooler-than-cool girlfriend who I don't get to see anywhere near as much as I'd like to. 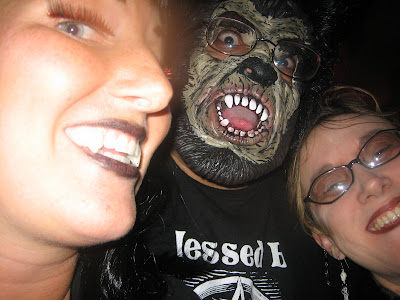 She looked great as a vampire — shockingly the only woman I saw as a vampire all day; what's up with that? — conveniently allowing Lanei the perfect partner for a photo op. 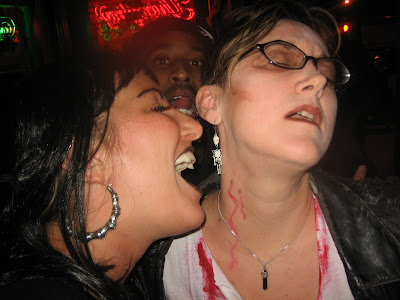 As things wound down and 2AM approached, Joyce, a sultry local Latina who I hadn't seen for a while, showed up and reigned as a sexy Puerto Rican pirate queen. 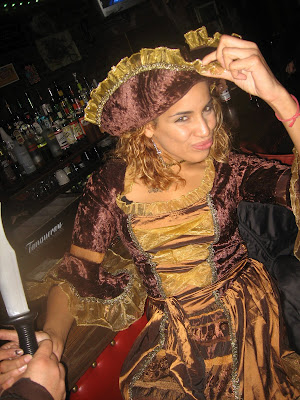 But all good things must come to an end, so I had a final round of Quervo and Bud while Lanei kicked back a Jameson's whisky, and then we made our way back to the Vault for some much needed sleep and recuperation the next day. 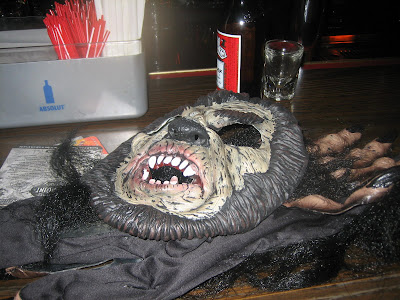 So Happy Halloween 2007! And if you have any fun photos and stories from your own Halloween adventures, please write in to the comments section and share!
Posted by Bunche (pop culture ronin) at Friday, November 02, 2007