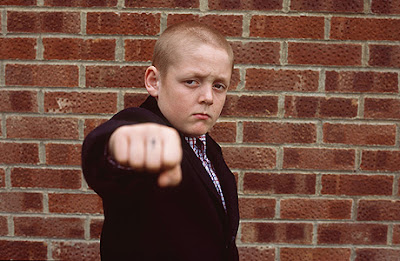 My man Thomas Turgoose as Shaun, the anti-McLovin.
At the urging of my man in Eastbourne, Chris Weston, I checked out Shane Meadows's THIS IS ENGLAND, and now I strongly urge you to see it for yourself.

The partly-aoutobographical story takes place in England during the summer of 1983 and follows twelve-year-old Shaun (Thomas Turgoose), a miserable loner whose father was killed the previous year in the ongoing Falklands conflict. Living alone with his shockingly brain-dead mother, Shaun is mercilessly bullied by the older and larger kids at his school, and on the last day before the summer holidays he gets into a fight with an older kid who tormented him over his dad's death, and on the way home he ends up befriended by a gang of local skinheads. The skins are a far cry from the sterotypical neo-Nazis we've come to expect, and in no time flat Shaun looks to them for guidance and acceptance, swiftly adopting the suedehead haircut and braces & boots fashion uniform that mark him as part of the tribe. These older role models are actually quite a nice bunch of kids, and during his early days with them Shaun finds a happiness not felt since before his father's death, even landing the cute and sweet "Smell" (Rosamund Hanson, looking like a cross between a marmoset and a rummage sale) as his overage girlfriend.

But a spanner is thrown into the works when Combo (Stephen Graham), a thirty-two-year-old skin and former leader of the band, returns after a three-and-a-half year prison term, now filled with nationalistic fervor and a mission to turn his younger comrades into racist, Paki-bashing thugs for the National Front. When given a choice of following Combo, most of the skins opt out with no hard feelings, but Shaun stays, seduced by Combo's words about the pointlessness of the war in the Falklands. Thanks to his bitterness over his dad's death, Shaun is a perfect tabula rasa on which Combo can engrave his hateful leanings, and Shaun devolves into a pint-sized hate-monger, willingly accompanying Combo and his mates on missions of defacement and general shakedowns of the local Pakistani population. With the seriously unstable Combo as his new father figure, it's only a matter of time until things spin out of control and Shaun must make up his own mind as to exactly who, and what, he wants to be.

One of the things that always fascinated me about the original British skinhead youth movement was how it was formed with a heavy influence of black culture, especially when it came to the music they listened to. The inner city lower working class skins had a lot in common with their Jamaican immigrant neighbors and they knew it, the two existing together fairly well. But then the British white supremacists came along, and many of the disenfranchised youth turned to them in search of something to believe in, spawning the Nazi skinhead, a group that exists to this day and is still exploited by their much smarter political role models and leaders. THIS IS ENGLAND deals with this in no uncertain terms, and before Combo returned there was even a black skinhead in Shaun's group of friends, a dapper lad named Milky (Andrew Shim), but despite Combo's kind and respectful treatment of him, Milky leaves rather than deal with Combo's rabid and, when considering Milky, contradictory nationalism. As the story progresses we learn much about Combo and what made him what he is, but the most revealing and tragic revalations about him come implicitly rather than explicitly during a moment of bonding with Milky while the two are stoned off their asses; it's an old-school skinhead love-fest until Combo loses control, an act that galvanizes Shaun's reality check and makes the viewer want to personally foot the bill for Combo's much-needed regimen of anger management and psychotherapy.

The film is stocked with wall-to-wall terrific performances, and Thomas Turgoose's turn as Shaun is utterly natural and believable, our hearts breaking as we see him transform from a sad little boy into a vicious, hate-filled follower. And his relationship with Smell is in no way sleazy or offensive; the scene in which they share a kiss in the backyard shed is pretty torrid and would never fly in an American film, but it's clear that when it comes to sex Shaun is pretty clear-heaed and wouldn't do anything he wasn't ready for, so his explorations with Smell remain within the PG-13 realm. Smell even goes so far as to tell Shaun that she'd never force him into anything he wasn't comfortable with, and is relieved to find that his opting out of sucking her tits had nothing to do with him not liking her, but was just due to him pacing his experiences with this kind and wonderful girl who he thinks is "lovely." It's really very sweet, and I was glad to see it handled with such good taste.

Stephen Graham's Combo is one of the more memorable antagonists in recent cinema, and despite his horrendous attitudes, he's too well-shaded to be considered an outright villain. I really can't say any more without giving away a major plot point regarding him, so I'll just stop right here. 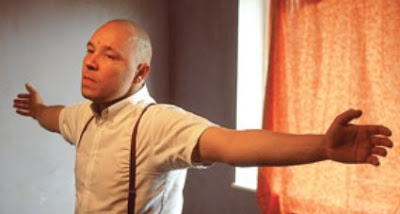 Stephen Graham as Combo.
Bottom line, THIS IS ENGLAND is an excellent and involving film that, according to my friends in the UK, is an unflinchingly accurate depiction of a specific element of the country's youth back in the bleak days of the early 1980's. It has moments of great charm, but it's also pretty much a downer from frame one, so keep that in mind before renting it thinking it my be the British cousin of a John Hughes teener flick, because it sure as shit ain't that. And whatever you do, keep the subtitles on; I'm good with British accents, but the dialogue in this film was quite regional, and the subtitles helped immensely. TRUST YER BUNCHE!!! 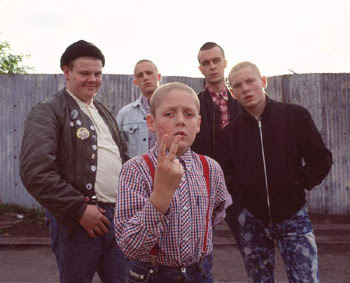 Wow. Thank you. I had never heard of this film until now, but it sounds like a must-see.