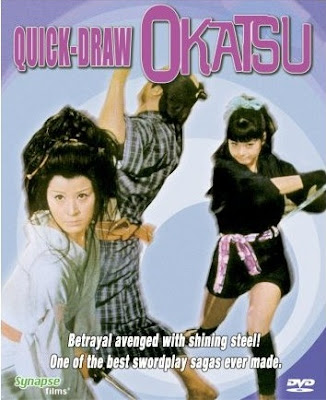 I love me a good "woman warrior" movie, and this one delivers strongly in both story and hard-earned ass-kicking. No two ways about it, dear readers, this one came from out of nowhere to earn a place among my all-time favorite samurai flicks.

This second in the LEGENDS OF THE POISONOUS SEDUCTRESS series is not a sequel to 1968's FEMALE DEMON OHYAKU, instead starting fresh but once more starring Junko Miyazono in the lead. This time around she plays Okatsu, the adopted daughter of a master swordsman and next in line to inherit the head position in her dad's hardcore dojo, easily edging out her disappointment of a brother. (As you may know, back in the feudal days Japanese women weren't given much respect, so Okatsu's publicly-stated status speaks volumes for her prowess before we even see her kill anybody.) The incredibly classy Okatsu looks like every geisha fantasy come to life and her demeanor is that of a proper Japanese lady, so it's only a matter of time before an ambitious magistrate/balls-out-evil asshole takes a shine to her. Taking time out from his heinous abuse of the local peasants and farmers, the douchebag approaches Okatsu's dad about wanting her hand in marriage, but, knowing full well what a bastard the magistrate is, dad turns him down flat, thereby setting in motion an escalating series of exceedingly tragic events that inevitably force Okatsu to drop the geisha-cutie bullshit and get down the business of serious killing. Aided by the mysterious wanderer Rui (Reiko Oshida), Okatsu's journey of vengeance is a painful one, and the resulting film is a classic of the genre.

QUICK-DRAW OKATSU takes its time in setting up all of its characters and situations, so when the story really gets going the viewer is emotionally invested in Okatsu's plight, something helped immeasurably by star Junko Miyazono. Her poise and "normal person" good looks sell Okatsu's believability, and I don't know if she's a trained kendoka, but she handles a sword with commanding presence and deceptive ease.

Junko Miyazono as Okatsu: charming and girly as hell...until you fuck with her.

Rui and Okatsu survey their handiwork.
But before you rush off to rent this flick I think it's only fair to warn you that this is one of the films that formed the template for the genre that would become known as "Pink" or "Pinky Violence" flicks, basically softcore porn that displayed acres of skin — but no bushola back in those days — and reveled in torture and cruelty, more often than not directed at the female characters. They eventually grew to become quite bloody, sadistic, and downright distastefully misogynistic in their obligatory rape sequences (an element that also mars many of the samurai flicks of the period), but as QUICK-DRAW OKATSU was one of the prototypes, things don't go so stomach-turningly out of control here. Yes, there's the requisite rape and torture — a scene in which some villains attempt to perform a crude abortion on one character against her will will have you wanting to dive into the screen and kick ass yourself — but there's no nudity shown and the swordplay bloodshed doesn't even come close to the arterial excesses found in the LONE WOLF AND CUB series (what does?). Oh, and did I mention that none other than Lone Wolf himself, the exquisite Tomisaburo Wakayama, turns up as a quirky bounty hunter? (He did a lot of fun character parts before gaining screen immortality as the "Babycart Assassin.")

So TRUST YER BUNCHE and give this one a look. HIGHLY RECOMMENDED. 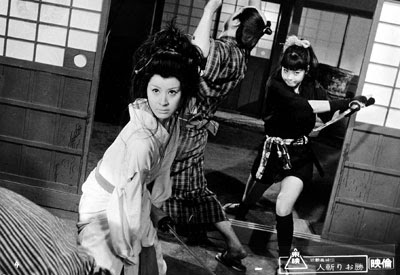 The same shot from the DVD cover art, as seen in the actual film.
Posted by Bunche (pop culture ronin) at Wednesday, November 21, 2007