SOUND & FURY: WHAT THE MIND PERCEIVES by Beyond The Flesh (2005) 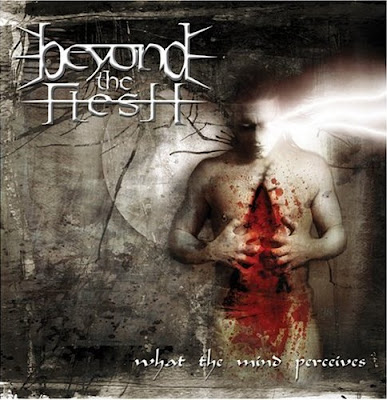 As a metal appreciator for nearly three decades, I think I’m qualified to offer the following advice to any would-be metal performers: Jesus H. Fuck, enough with the shredded wheat vocals, already! Unless done with an intentional aim toward comedy, such stylings aren’t scary, more often than not end up sounding silly, and do not serve to mask your front man’s crooning deficiencies. This offering from Beyond The Flesh is not a bad album by any means — although admittedly a tad generic — but it’s almost sunk by the ludicrously laughable vocals that sound like what would ensue if your housecats stood up and made with a metal duet (listen to the track entitled “Fleshwound” and tell me I’m wrong).

The album itself is a workmanlike bit of product replete with machine gun drumming that reminds one of the finale of Brian DePalma’s SCARFACE, accented by the aforementioned taking-a-savage-dump vocals. In other words, nothing terribly original, but not quite worthy of being used as a skeet shooting pigeon or a coaster for your beer. TRUST YER BUNCHE!!!
Posted by Bunche (pop culture ronin) at Thursday, November 08, 2007