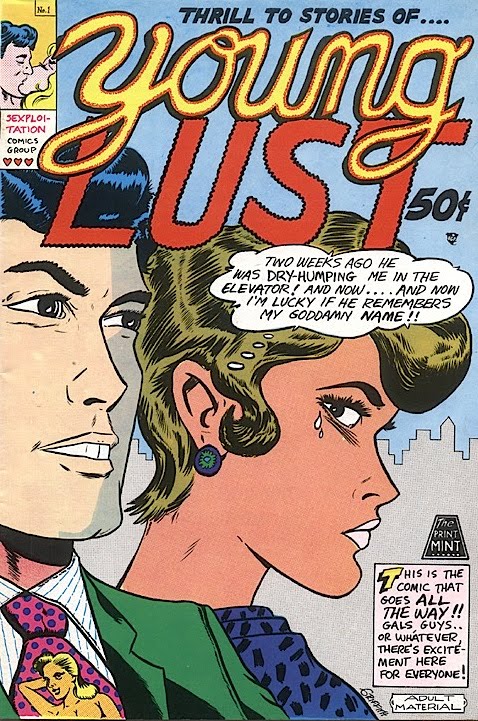 YOUNG LUST #1 (1971): one of the influences that set me on the path to irredeemable ruination.

It probably comes as a no surprise that the Bunche whose drivel you keep coming back to read is the sorry result of a lifetime of odd influences and occasionally inappropriate experiences, so right now I would like to share with you an especially fond moment that marked a major turning point in my youthful corruption.

During my junior high school years there was a terrific little hole-in-the-wall used book store in Fairfield, Connecticut whose proprietor didn't care how young a porn-buying patron was so long as they could pony up the required scratch, and it was thanks to that kind policy that I began amassing a formidable library of what were then known as underground comics. ZAP COMICS, SLOW DEATH COMICS, THE FABULOUS FURRY FREAK BROTHERS, JIZ COMICS and of course the infamous FELCH CUMICS all found a place on my bookshelf and each in some way filthied up my mind a bit. Of the lot mentioned I'd say FELCH CUMICS was easily the most mind-expanding, due to its graphic depictions of its titular "retrieval system" and the unforgettable story that posits Jesus' conception being the result of the Blessed Virgin being tag-team anally raped by two "felching vampires" and her birthing the savior out of her asshole, thus preserving her virginity, a story very much unbeatable in terms of sheer blasphemous offensiveness.

Then came YOUNG LUST #1 (1971), a dead-on parody of sappy romance comics filtered through the undergrounds' sex and drugs sensibility, and found within it was the piece that utterly fucked up myself and two of my best friends, Peter the Red Menace and his younger brother, Freak-Boy Daniel. Those two fine examples of Armenian weirdness were among the handful of misfits and bizarre kids who made me feel not so alone in Westport's preppy and conformist confines and we each influenced one another with as many examples of books, music and other strange shit that shaped who we are to this day. My dubious contribution to this adolescent information exchange was a steady avalanche of varying degrees of pornography and underground comics, so when YOUNG LUST #1 fell into my hands I didn't expect it to be anything other than just another dirty comic.

Until I read "Love's Body."

"Love's Body" was a one-page "touching" tale of one man's discovery of true love and the loss thereof, only the object of his desire was a freshly-murdered corpse. Filled with the kind of over-wrought sappy dialogue common to romance comics yet plainly depicting a guy "ballin' da corpse," it was my first exposure to the concept of necrophilia and the very thought of it fucked with me on several levels. While clearly making fun of the tropes of the average romance comic and being very funny for coming up with something so disgusting and presenting it with a totally straight face (which only makes humor that much funnier, in my opinion), I was far more outraged by "Love's Body" than I was by the Felching Vampires story because the latter was so obviously removed from the realm of possibility. "Love's Body," on the other hand, was all too easy to picture actually taking place behind closed doors anywhere in one's own neighborhood, perhaps even next door.

As soon as I could I shared this gruesome revelation with Peter and Daniel, consequently ensnaring them in my ruination, and the two of them shared my sense of simultaneously being appalled to the core and wanting to laugh out loud about it. Daniel was especially warped by "Love's Body" and when I saw him again for the first time in almost twenty years it was one of the first things he brought up as being a mind-warping moment from his childhood. The ruination-spurring "Love's Body" is seen below, so enjoy! 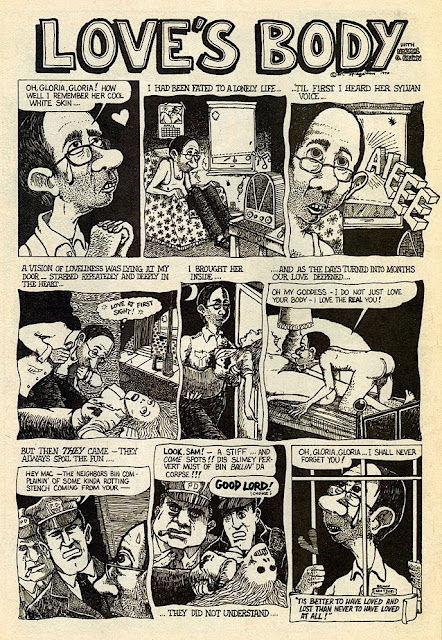 The wistful majesty of "Love's Body."


If this seems tame by today's standards, it probably is, but bear in mind that my friends and I encountered this long before we had access to VCRs and over-the-counter porno of the horrifying ilk found near Manhattan's Port Authority. It would be well over a decade before the Internet opened whole new unimaginable vistas of vileness that would pretty much render necrophilia a minor offender at best, so this was just about as bad as it got. If I'd been caught with this at home or, even worse, at school, I shudder to think what the consequences would have been. My junior high's administrators would have probably suspended me and labeled me "disturbed," while I guarantee that my mom would have immediately sent me to one of the area's innumerable psychiatrists.

Oh, and did I forget to mention that "Love's Body" is the work of Art Spiegelman, future Pulitzer Prize-winning author of MAUS?

UPDATE: In 2014, my friend Peter turned fifty, so I had "Love's Body" printed up large and got copies of it laminated to give to Peter and Daniel in what would be our first reunion in about a decade. It was a heartwarming moment of shared ruination revisited. 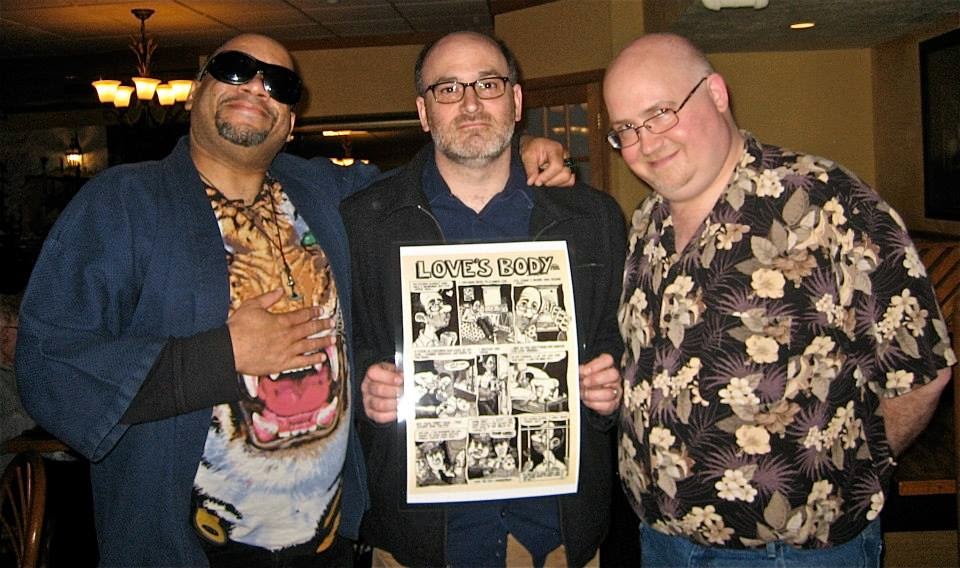 Labels: COMIC BOOKS ARE FOR IDIOTS, HOW I GOT RUINED

Smokin' a bone with a friend from work back in '79 or '80 showin' him my underground comic collection, it suddenly dawned on me how shocking TALES OF THE LEATHER NUN might seem to my parents and just about everybody else I knew.