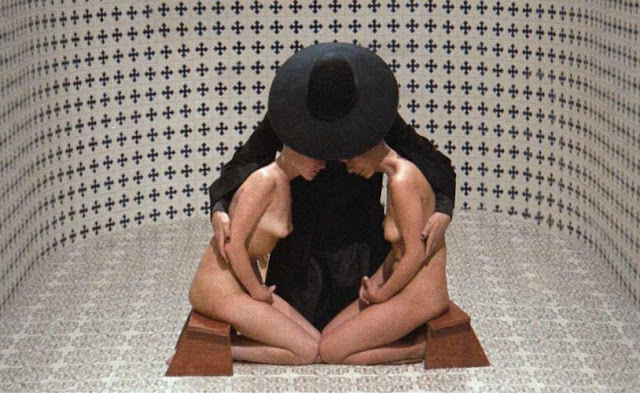 Jodorowsky's THE HOLY MOUNTAIN: perfect change of pace viewing for the holidays!

I'll be back fairly soon after the Thanksgiving break, ready to once more regale you with pop culture drivel and such, and hopefully I'll be feeling better by then. For me being in Connecticut is a boring ordeal, but here's the breakdown on my holiday thus far:
Anyway, I'll be back soon with all manner of stuff, including a long-overdue review of Alejandro Jodorowsky's ultra-lysergic THE HOLY MOUNTAIN (1973), the film that served as my personal palate-clearer after the Macy's Thanksgiving Day Parade and some of the more treacly programming that I was forced to endure. It's one of the most balls-out bizarre movies ever made and rife with symbolism and religious imagery that is guaranteed to make you scratch your head in confusion until you gouge a deep, bloody furrow into your scalp. Seriously, where else can you see a re-enactment of the conquest of Mexico featuring hundreds of bullfrogs and lizards in period costume as Aztecs and Spanish Conquistadors?

So with that in mind, we'll soon cross paths again.
Posted by Bunche (pop culture ronin) at Saturday, November 28, 2009

My wife has led me to believe that saying "stuffing" instead of "dressing" is some kind of whites-only thing. And she ridicules me when I accidentally revert to the former.

Going to have to use this as Exhibit A that the terms are fully interchangeable between the races.

Of course, the risk of doing so is delaying my next bout of nookie by at least a day, so maybe I'll let it slide...

Deacon, it's funny you should bring this up. My mom, who was raised in the deep south, was discussing this with an equally aged friend who is while and also grew up in the deep south, and she says that the use of "dressing" as a term rather than "stuffing" in a regional thing. She grew up with "dressing" in common use, as did her pallid friend, and it wasn't until the two of them left the south that they encountered "stuffing" as the blanket norm. And her friend says that where she grew up the two terms were used to differentiate between that which was cooked inside the bird and that which was cooked separately in a pan as surplus.