Most of the stuff I picked up at the NY Comicon consisted of books, some light-up Green Lantern power rings (you never know when you'll need one of those) and a DVD boxed set of Gerry Anderson's STINGRAY — which I snagged for ten bucks. Score! — but when I saw the item I'm about to show you, I stopped in my tracks and immediately asked the vendor "How much?"

The shirt in question is "Wa-Zilla" by artist Pete Von Sholly and I fucking love it. 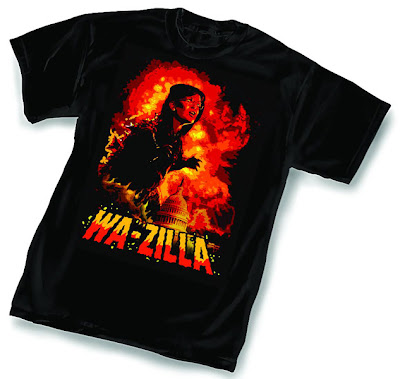 The naming of "Wa-Zilla" is quite inspired and rather than being some hack's generic parody of Godzilla, Von Sholly's illustration displays his clear understanding of the aesthetic of the daikaiju genre, what with the worm's eye view to enhance the monster's bigness and the creepy illumination by fire. In fact, while researching Von Sholly, I came across this piece of artwork that proves he's definitely a fellow "monster kid." 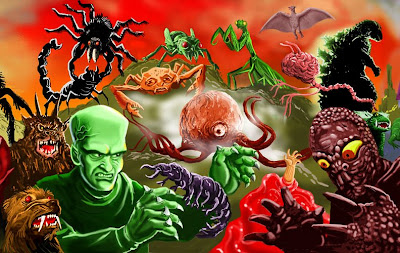 This monster mural is peopled ("monstered?") with characters that no newbie would have included, and those of you who know your movie monsters know I'm right.

Face it. You know your life is not complete without this shirt, so you can buy it here.
Posted by Bunche (pop culture ronin) at Wednesday, October 13, 2010