LOOKS LIKE THE SPIDER-MAN MUSICAL IS ACTUALLY GOING TO HAPPEN 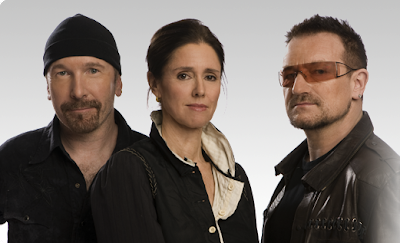 The perps (minus co-book writer Glen Berger).
This morning as I ate breakfast and readied myself for the pre-NY Comicon press briefing, I was listening to the radio and heard the first ad for SPIDER-MAN: TURN OFF THE DARK, the upcoming Broadway musical. This thing has been in development for quite a while and has famously suffered a number of setbacks, so it looked like it was going to go tits-up before it even got out of the gate. But no, it's actually opening on November 14th for previews and if I can possibly swing it I have to attend. Though I have utmost respect and admiration for director Julie Taymor, there are many reported aspects of this show that simultaneously fill me with a deep dread and a sense of elation as a fan of "bad" culture. Among those aspects:


And here it is as performed in concert by Spew 2 themselves:

It's still awful, but I must admit that I like that guitar riff, but that's it. 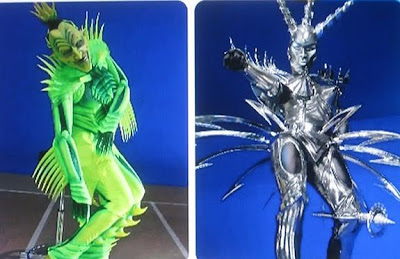 The whole thing looks to be adding up to be an epic disaster and I have to be there to witness it with my own eyes. Maybe I'll be proven wrong and it will be great, but I seriously doubt it. Oh and the cheap seats are going for $76.50, while the top-shelf seats will set you back by $145.00.

Is it just me? Or is the boy-band reject singing the tune in the first vid clip really untalented?

I hope he's not playing Spiderman. He has as much stage presence as a plate of refried beans.

No doubt about it - you HAVE to attend. Either way it goes, it'll make for a great story afterwards.
After all - wouldn't you have loved to have been in the audience when the CARRIE musical first premiered?

Wow that song is super lame, but to me U2 has been living off their past for years and only delivered one marginally entertaining songs in the past fifteen of them. I walked by the theater where this will take place the other day while heading to B.B. King's and scratched my head about it. Unfortunately I don't see this as being anything but bad myself for a couple of reasons.

Villainy should of come care of Mysterio and perhaps Kraven The Hunter. Two names from the rogues du Spidey that might have been interesting on Broadway. I am beyond tired of the Goblin and this "Swiss Miss" abbhoration makes me think of Transformers more than Spider-Man.

As I read your narrative I realized that I missed the pre-Comic Con press briefing but I was out for the count from the previous nights Triptykon/1349 show.

Y'know, I have deep respect for Julie Taymor's audacious vision. The Tempest looks to be brilliant, and who'd have imagined that her Lion King would turn out to be a classic?

That said, this looks like one of those moments when audacity leads not to brilliance but straight off the nearest cliff.

Enjoy... I guess. Show us the carnage when it's done.

These costumes made me think of the time I took my son to see Pokemon Live at Radio City Music Hall.

This is not a good thing.

And if the show is actually good? Will your brains explode?
I'm involved in the production and folks--I wouldn't write it off just yet...

You're absolutely right, Anonymous......we should wait until after the critics savage it and THEN write it off.

I'm intrigued by Anonymous' boosting, it makes me want to believe... but I know all too well how easy it is to be blinded to a clusterfuck when you happen to be on the inside of it. Those costume designs look like all kinds of nobody knows what the hell to do. And it's not like Julie Taymor has never fallen on her face before (I either walked out on "Titus" or fell asleep in it, I forget which.) We shall see...