THE BLACKEST DAY OF MY LIFE

The blaxploitation flicks of the 1970's had a tremendous impact on me and many kids of my generation, bringing truly kickass black heroes to the screen for the first time (Herb Jeffries was a pioneer, but his era did not allow for cussing, nudity, or graphic violence). It was a glorious time that unleashed upon the screen a dynasty of ebony demi-gods, both male and female, who could out-fight, out-fuck and outsmart any jive-ass turkey who had the temerity to fuck with them, and while many of these films and their stars were derided for allegedly providing a terrible example of blackness, those of us who dug the stuff dug it with a vengeance and still carry its standard with zeal.

To me, the Holy Trinity of blaxploitation actors are Richard Roundtree, who got the ball rolling as bad muthaSHUTCHOMOUF! John Shaft, Fred "the Hammer" Williamson, who gave his films a sense of cool and machismo only matched by Sean Connery's James Bond, and Jim Kelly, the huge-Afroed brutha who shared the screen with Bruce Lee in ENTER THE DRAGON and made me want to see a whole movie about his character, so there was no way I was going to miss the opportunity to meet all three of these elder statesmen of Negrotude when they appeared on Friday at the Chiller Theatre Expo in Parsippany, New Jersey. Here is the photographic evidence of this disciple meeting the sacred elders, along with some examples of the work for those somehow shamefully unaware of their oeuvre. First up is me with Richard Roundtree, whose SHAFT hit the screens with seismic impact in 1970. 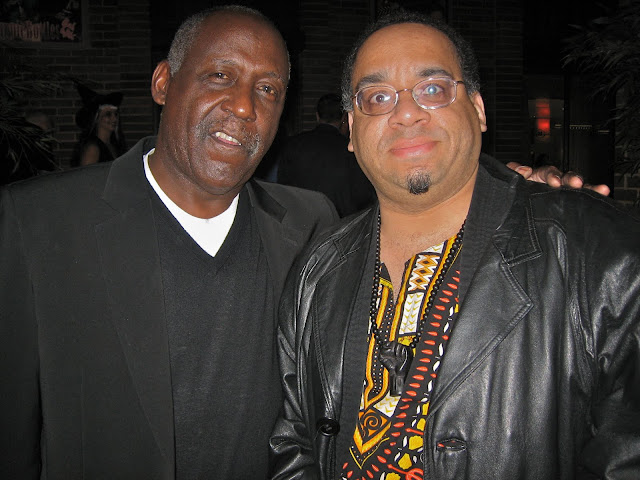 
Even if you know nothing about the blaxploitation era, you know about SHAFT, if for no reason other than its now-classic and Oscar-winning score. Watch the trailer and if you say you don't know that music, you are a muthafukkin' liar.


Then there's Fred Williamson, who is so personable that he practically gives off superhero radiation. 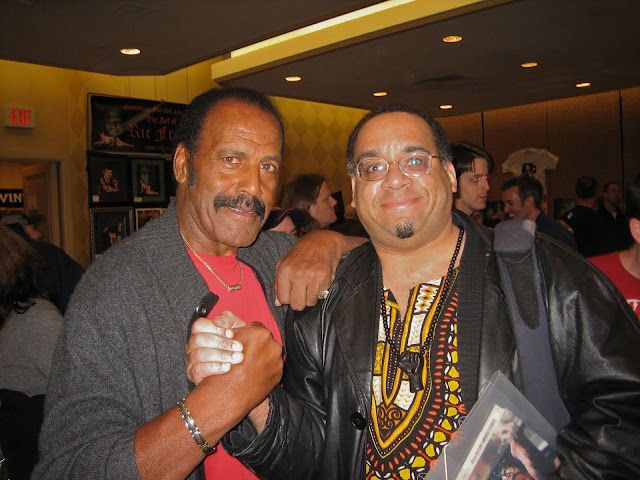 
I like many of Fred's movies but I have a special place in my heart for BOSS NIGGER (1975), a western that I often describe as BLAZING SADDLES if it weren't a comedy. I'll never forget watching TV at age ten and seeing the ad for it, which featured the theme song heard in the embedded trailer.


When my mom and I saw that, I was stunned and asked "Can they say that on TV?!!?" Having grown up in the deep south during the pre-Civil Rights era, my mom was utterly appalled and tut-tutted the "sorry state" of American blacks, which made me realize the film was likely worth checking out. I did not get the opportunity to see BOSS NIGGER until about two years ago, when it finally came out on DVD under the utterly neutered title of simply BOSS.

Last and definitely not least is Jim Kelly, the celeb who helped spark my interest in learning the martial arts and also growing my 'fro to proportions that almost gave it its own gravitational field. It says a lot that Kelly could be as cool as Bruce Lee in what many consider to be Lee's magnum opus, and he simply looked amazing when kicking ass in that yellow gi. 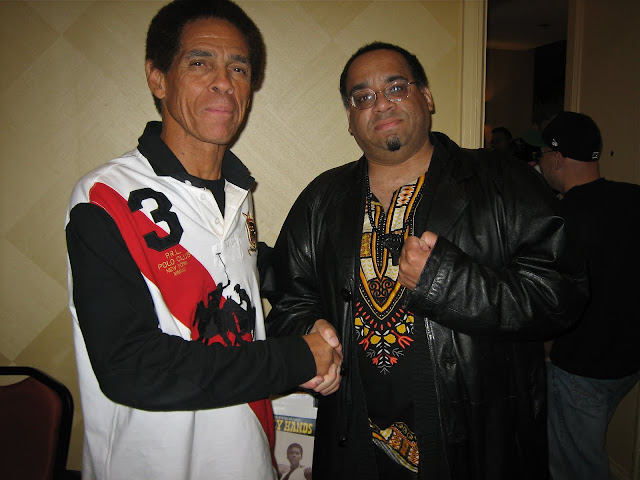 When I met Jim Kelly, I was so flabbergasted that I almost could not speak.


Kelly made a number of films after ENTER THE DRAGON, most notably BLACK BELT JONES and THREE THE HARD WAY (both 1974), and when the blaxploitation era inevitably waned he became involved in professional tennis and continues to work as a coach.

And, being the autograph-hound that I am, I had to get personalized 8x10's of these titans of the late-20th Century.

A classic shot of Shaft in Times Square, circa 1971 (translation: "before it had its balls cut off). 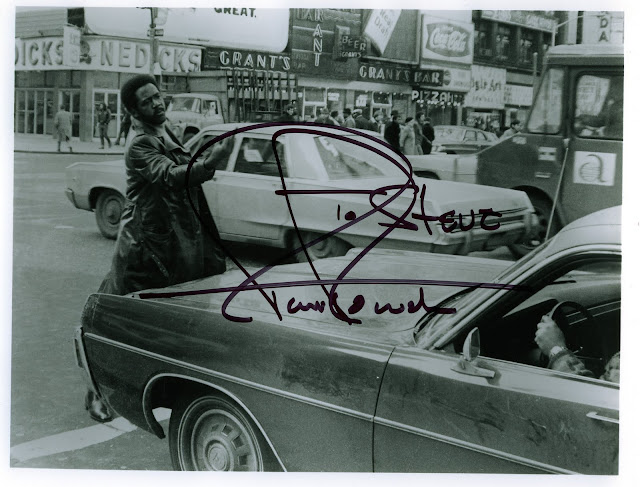 As seen in the trailer, here's the moment of NYC charm in which Shaft informs an errant driver that he's "#1." When Roundtree saw this photo, he laughed out loud and exclaimed, "Now, here's one that you don't see every day." 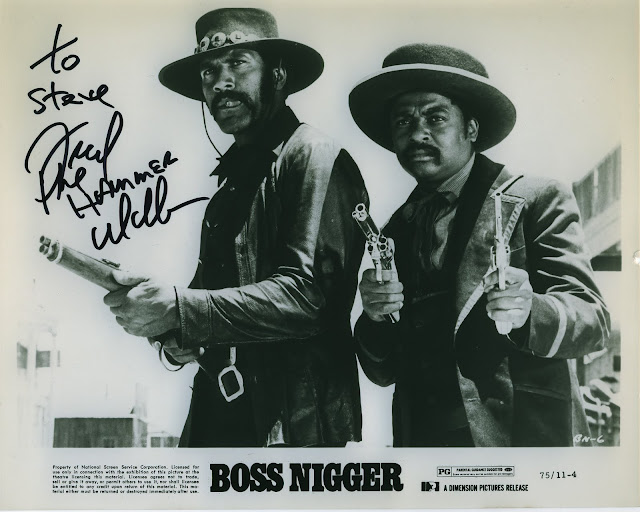 It's shots like this that make me glad I'm a collector-geek who brings his own stuff to get signed at shows. Fred had some good pics available, but nothing from BOSS NIGGER. 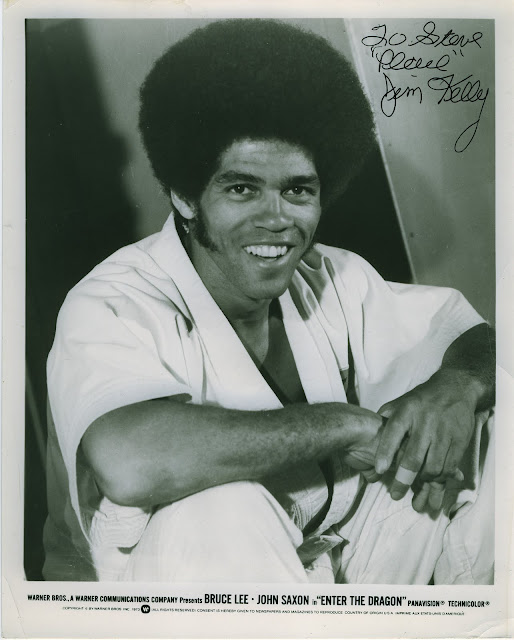 When I handed this to him to sign, Jim Kelly perused it for a long time, noting that he hadn't seen this promo shot pretty much since ENTER THE DRAGON came out.

As you may have imagined, I was deep in a geekish man-crush heaven, and I would count Friday as the blackest day of my life. *SQUEE*
Posted by Bunche (pop culture ronin) at Saturday, October 30, 2010

That's awesome Steve. Too bad there was not a pose of all four of you together. Talk about, wait for it, FAN-TASTIC. Hails and horns.