The final day of the 2010 NY Comicon ended with a more sedate day than the previous two, and that was only a good thing.

I began the day at the Art Institute, where pal and documentarian Ian Fischer invited me to attend as he shot footage of Pia Guerra, Ian Boothby and Shane McCarthy for his upcoming documentary, SUPERHERO NATION. 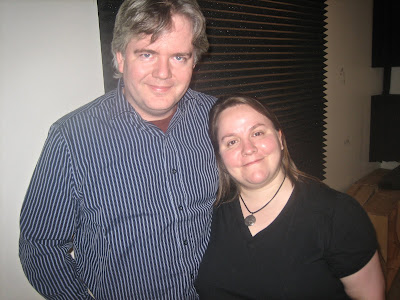 11:45AM-Ian Boothby and Pia Guerra at the Art Institute, about to be interviewed by documentarian Ian Fischer for his documentary on superheroes and what they mean to American culture and the people. 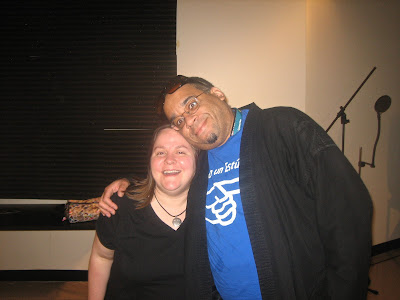 Finally having met after ten years of phone and email communication, it was a love-fest between me and Pia. A real peach, and Ian Boothby's a lucky bastard. 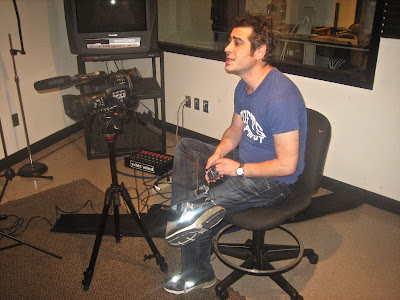 Filmmaker Ian Fischer briefs Pia before he shoots her interview. 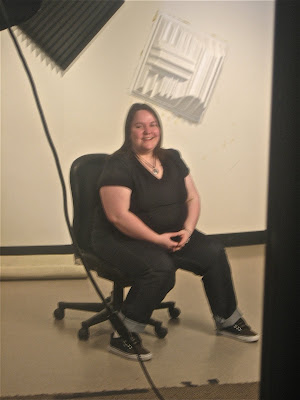 Pia awaits the start of shooting. Her interview was terrific and I could have listened to her expound on the subject for hours. The same is true for Ian Boothby, whose every word I agreed with. (His interview is not pictured because my shots of it came out blurry.) 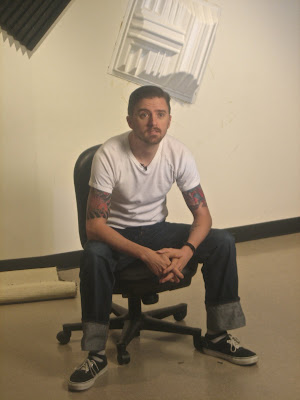 Shane McCarthy, a fascinating Australian comics writer whose interest in Greek Mythology set him on his oath from childhood, a life-changing moment we both share. Among other interesting things about this guy, he has gone to remote aboriginal villages to speak with the children about the validity of comics as a medium for storytelling, something the elders were absolutely down with, being some serious story-telling folks themselves. His interview was riveting. 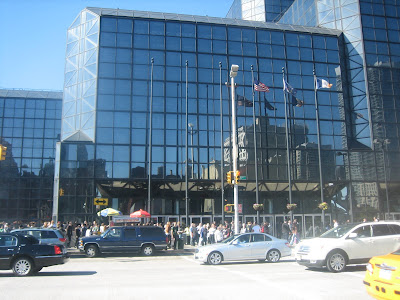 After the interviews, we hopped a cab and hightailed it to the Javits Center, where Pia and Ian had signings. We parted ways with the promise to get together before they headed back to Canada later in the week, and with that I made my way back to Artists Alley. 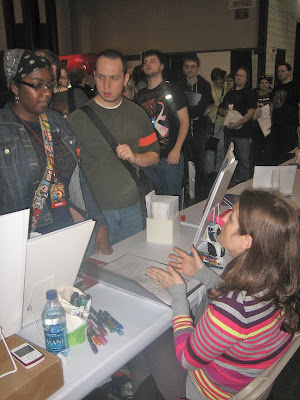 Amanda Conner imparts her wisdom to an aspiring cartoonist. 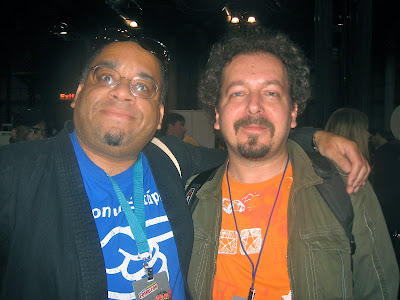 Me with Goran Sudzuka, the inker on OUTLAW NATION, which I edited during the latter portion of its run. A complete sweetheart and possessed of great talent, I had no idea he was in town from Croatia. 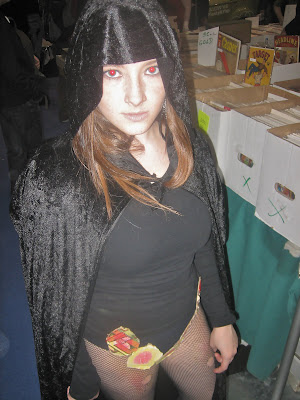 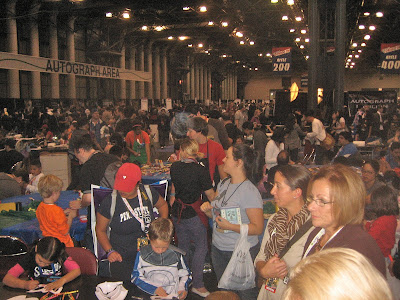 Sunday's throng was about 30% less than the crushing, jostling horde of the previous day, but it was still a bitch to navigate the floor. Hint: if you're kid's young enough to need a stroller and is not able to get around under their own steam, they're likely too young to go to a con with this level of crowding, and when you stop to inspect a stroller you completely obstruct foot traffic until you are done and move on. (Anyway, enough grousing.) 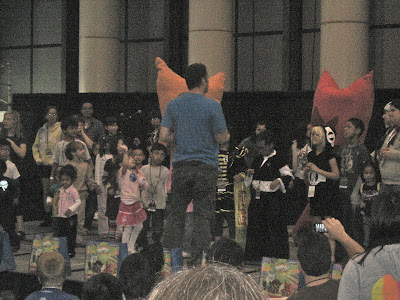 Children being led in a wacky dance in the area reserved for keeping the ambulatory little ones entertained. 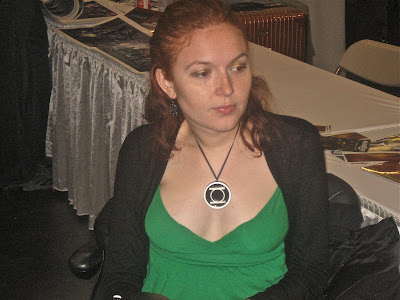 The titian-haired loveliness of Jill Pantozzi, aka "the Nerdy Bird," a fellow comics journalist, blogger and proprietor of the excellent site HAS BOOBS, READS COMIICS, which you can check out at http://www.thenerdybird.com/ 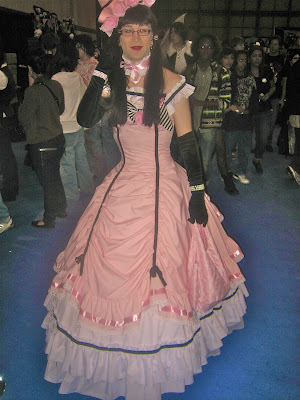 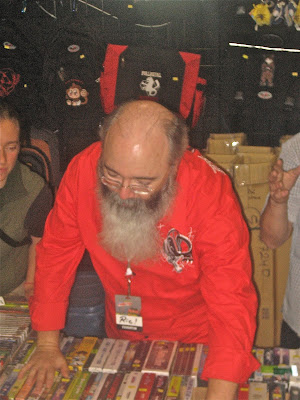 The one and only Ric Meyers, the man I lovingly call "sifu" for a myriad of reasons, chief among which was him single-handedly igniting my fervor for exploitation films with his 1983 book FOR ONE WEEK ONLY: THE WORLD OF EXPLOITATION FILMS. We met during the latter half of my senior year of high school when I was working at the local two-plex movie theater and he saw me reading his book during the break. We've been friends ever since and he has been an immeasurable influence on my love of martial arts films, exposing me to many of my favorites for the first time, including DRUNKEN MASTER and a restored version of rated-"X"-for-violence THE STREET FIGHTER years before the restored version was released on VHS or DVD. Insult this man and you insult me. 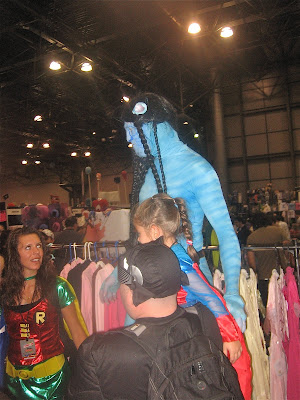 Of the con's many Na'vi, this guy was my favorite. The characters just don't work without the height, and this guy nailed it. 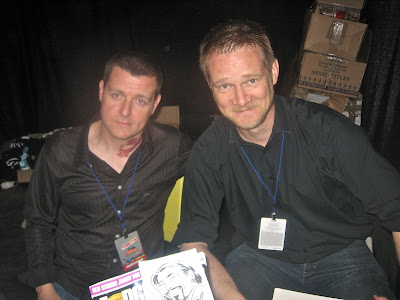 At the 2000 AD booth, I re-met Robbie Morrison (L) and met Simon Fraser (R) for the first time. They're the creators of NIKOLAI DANTE, a long-running and popular series in the venerable U.K. sci-fi magazine, and a couple of very cool dudes. One of these days I would like to hoist a few with Simon, since he lives not too far from me. 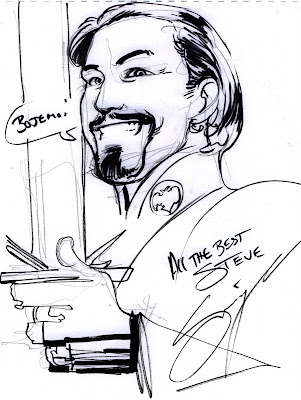 A gorgeous sketch of Nikolai Dante, a gift from Simon Fraser. 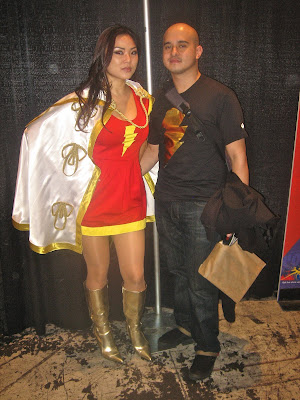 As I've said before, I love it when Marvels represent. 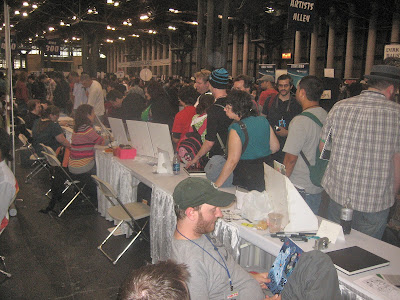 The line of Amanda's fans gets bigger and bigger at every show, as is only proper. 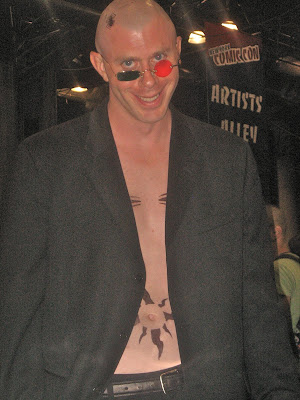 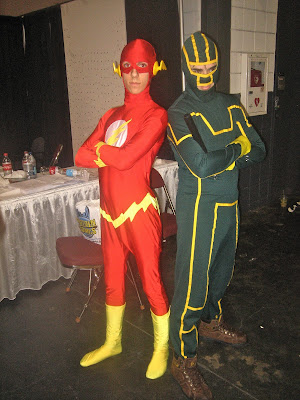 The Flash and Kick-Ass try to out-"bad" each other. 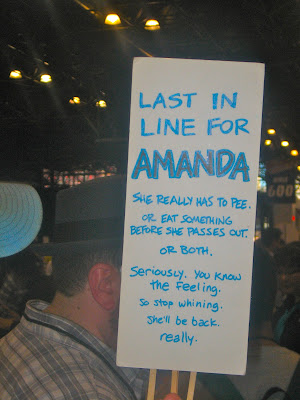 Where the line ends. 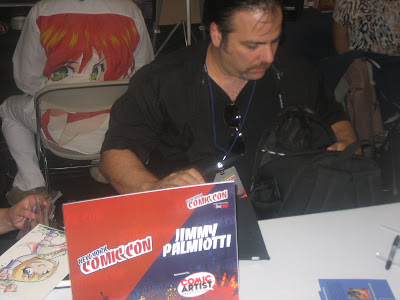 Always on the go, Jimmy Palmiotti receives a call from the President. 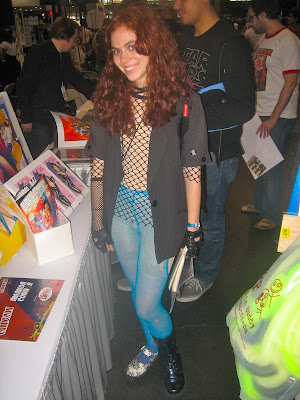 A winsome A.C. fan waits while Amanda draws Cassidy from PREACHER. Oh, and she's dressed as Delirium from THE SANDMAN. 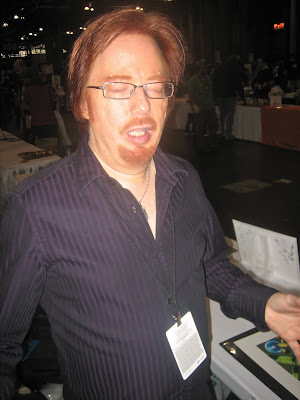 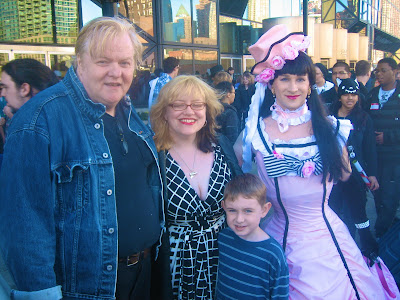 (L-R) Billy Thompson, Stephanie Ratcliffe, her son Kodiak, and Charles, all relieved to be out of the throng and back on the outside. 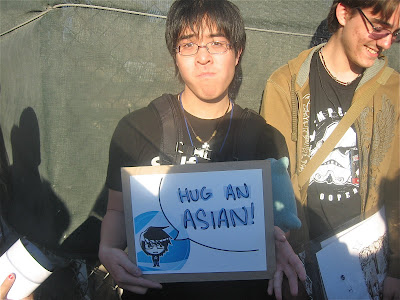 The perfect coda for a kickass con.
Posted by Bunche (pop culture ronin) at Tuesday, October 12, 2010

I'm amused you can see my Power Girl sketch in the picture of Jimmy, which means I'm sitting in a very unladylike manner on the floor beside him.

I also love Amanda's end of line sign like burning. I wish you had a picture of the other side of it too!