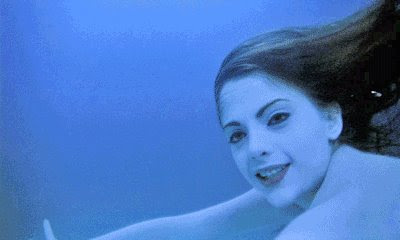 Picture, if you will, a vast undersea expanse, all sound muted by the water that envelops you as shafts of light from the distant surface provide scant illumination. You swim through this seemingly endless dreamlike environment, your movements slow and clumsy, body leaden with the weight of your scuba gear and aided by the beam of a flashlight. Suddenly, through the murky darkness you encounter an opening in the ocean’s floor that is clearly the skillfully crafted work of hands unknown, a wide portal that is at once ocular, oral and vaginal in its aspect. You swim into its yawning maw and curiously explore this tunnel leading to…where or what you cannot begin to fathom. Your hands explore the eerily striated walls of the portal, and as your fascinated gaze scans what lays before you, the pallid face of a beautiful, raven-tressed mermaid smiles up at you. She swims into clear view and you marvel at her strange beauty as her thick hair swirls about her, borne by invisible currents and exposing her lovely, buoyant breasts. This nubile vision swims over, unafraid, and removes your facemask and rebreather’s mouthpiece. Your senses reel as she kisses you, deeply and passionately, and you don’t even notice you no longer require your heavy equipment to breathe, so caught up are you in the deep-sea maiden’s unexpected ardor.

That’s the basic setup for Stuart (RE-ANIMATOR) Gordon’s masterful H.P. Lovecraft adaptation, DAGON (2001), and among its many malignant wonders is Macarena Gomez as Uxia Cambarro, the beautiful large-eyed mermaid from the opening dream sequence. 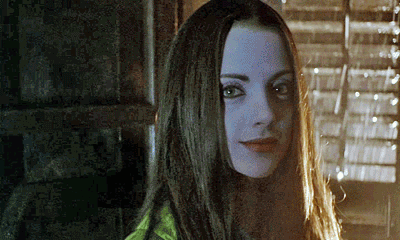 In the dream she was the mermaid fantasy brought to alluring life, but in the incredibly creepy reality of the remote fishing village of Imboca she’s the wheelchair-bound high priestess of the evil oceanic god who has mated with mortal women, thus spawning a race of human/sea monster hybrids. 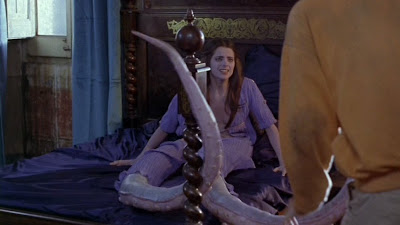 Uxia’s clearly one of those creatures, but even though she boasts a pair of floppy, sucker-laden tentacles in place of a scaly fish tail, to say nothing of the enormous, gasping gills on her ribcage, she’s got that wild-eyed-and-crazy look that I find irresistible. 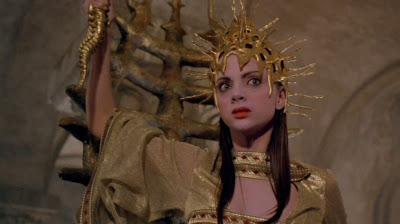 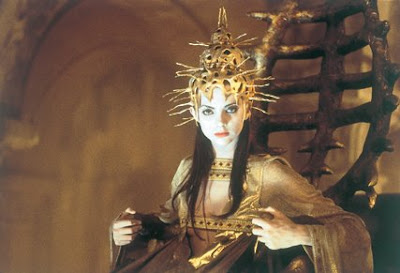 No bullshit, if you haven't seen DAGON, run out and rent it immediately. It's fairly low on gore and violence but it's got an appropriately high creep factor that translates the crawly feel of Lovecraft's tales of cross-species interbreeding to the screen, and getting across the flavor of his works had never been successful in the movies until this one. HIGHLY RECOMMENDED.
Posted by Bunche (pop culture ronin) at Tuesday, October 19, 2010

I'm also willing to admit that this is some tentacle sex fetish action I would not hesitate to explore.