Renowned comics artist and illustrator Joe Jusko just informed me that Victoria Vetri, aka 1968's Playboy Playmate of the Year, Angela Dorian, the woman who single-handedly ignited my famous jungle girl/cavegirl fixation, has been busted for the attempted murder of her boyfriend. I've had a thing for her since I saw her in WHEN DINOSAURS RULED THE EARTH (1970), so this just plain shocks me. It's like finding out that Racquel Welch stuffed a butcher knife through some dude's chest. 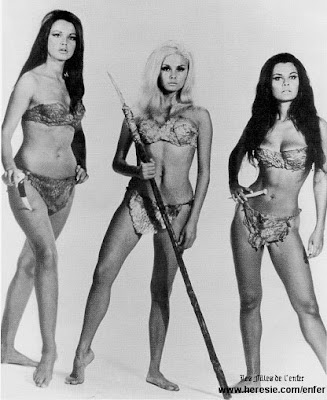 Victoria Vetri, the blonde in the middle, as I first saw her when I was five years old. Now she's in jail and bail is set at a million bucks.

If you didn't see WHEN DINOSAURS RULED THE EARTH, you may remember her as the pregnant neighbor who Mia Farrow tells she looks like Victoria Vetri in ROSEMARY'S BABY (a gag that I love), or as the briefly-seen humanoid form of Isis the cat in the classic STAR TREK episode "Assignment: Earth." 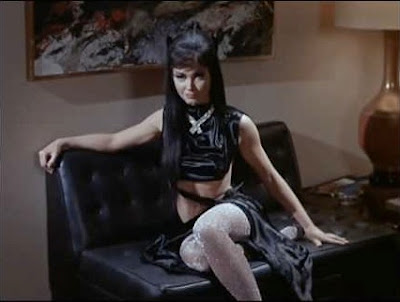 Vetri as Isis on STAR TREK.
If there's one thing Ive learned from personal experience, it's that you do NOT fuck over Italian chicks (Vetri was raised here, but her parents are straight from the Boot). If they love you, no one loves you harder, and the inverse of that is also true. If you fuck with an Italian chick in a serious way, you may as well dig the hole yourself.

You can read the news story for yourself here. I just hope that this is proven to be a case of clear self-defense... 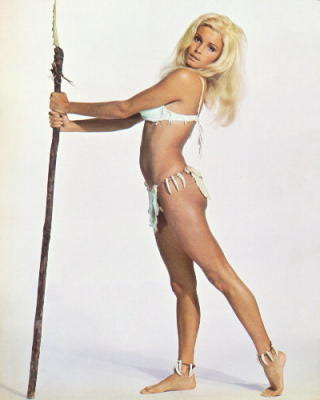 I'm rooting for you Vicki. I just hope you had a damned good reason for shooting that guy.
Posted by Bunche (pop culture ronin) at Wednesday, October 27, 2010

Good God! I've been doing a build-up-to-Halloween Hammer movie marathon, which of course led me to get out my Hammer Glamour book (worth every penny, by the way), and I was just reading her entry in it last night and thinking I should try to get ahold of When Dinosaurs Ruled the Earth. Yeesh!