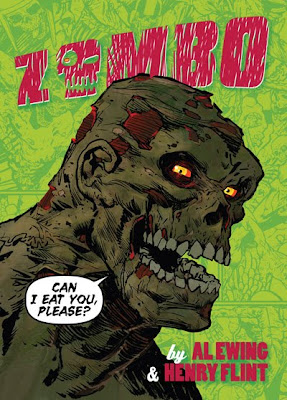 Britain's venerable weekly sci-fi anthology comic 2000 AD has unleashed many memorable series and characters since its inception in 1977, but it's often been argued that its best years are behind it and it continues on solely based upon the strength of its past achievements and its status as a landmark in British comics publishing. For the most part I would agree with that assessment, but every now and then there appears a new strip that reminds me of what 2000 AD can be like when it's firing on all cylinders, and its most recent strip to place a huge, stupid grin on my face is ZOMBO, a welcome return to the mag's signature blend of compelling narrative, twisted humor, and serious lashings of the old ultra-violence.

Debuting in Prog #1632 (April, 2009), the series opens with an inter-planetary charter flight crash-landing on planet Chronos, an incredibly hostile and sentient "deathworld" that lures in hapless victims and where damned near everything on it is lethal to man. In other words, the planet knows exactly what it's doing and has fun doing it. The spacecraft's thirty-three passengers all survive the crash, but in literally no time the planet starts whittling their number down one by one in alarmingly gory and painful ways. Help comes in the unexpected form of Zombo, a decomposing super-zombie who is the ship's top secret cargo. 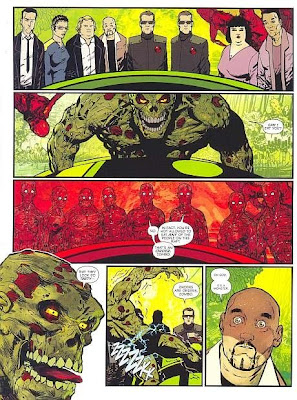 The survivors meet Zombo, the most polite flesh-eating undead guy you could hope to meet.

Once awakened and out of his container, Zombo is instructed by his government handlers to protect the survivors, and from that moment on it's a chapter-by-chapter festival of creative and beautifully-illustrated carnage, punctuated by Zombo's incongruous good manners and generally cheery attitude. Sure, he's a super-strong mouldering re-animated corpse, but he's also a self-described "good boy."

The second arc is "Zombo's 11," a gloriously ludicrous parody of the original OCEAN'S ELEVEN (1960), with side-splitting jabs at YouTube JACKASS-wannabes and AMERICAN IDOL thrown in to hysterical effect. To give away more would spoil the fun, so I'll just shut up now. 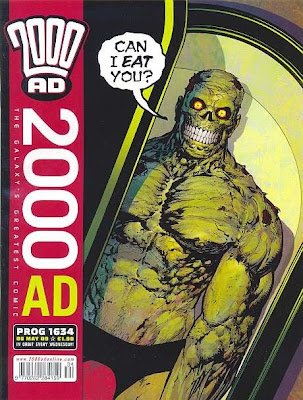 Written with considerable verve by Al Ewing (JUDGE DREDD), who seems to be having a ball doing it, and gorgeously drawn by Henry Flint, the cruelly-underrated illustrator of 2000 AD's SHAKARA (among other projects), ZOMBO is the most fun regular strip to appear in the magazine in ages and it cracks me the hell up. The only complaint I have about this collected volume of the series is that there's so little of it to be had, solely by virtue of its relative newness, but that works to the advantage of new readers who would otherwise have to slog through, in some cases, literally decades of JUDGE DREDD, STRONTIUM DOG, SLAINE, THE A.B.C. WARRIORS and several others to have even half a clue as to what the hell was going on. And, frankly, many of 2000 AD's cornerstone series started out strong and then majorly screwed the pooch, some continuing to run interminably when for ages there's been no good reason to continue them (yeah, I'm lookin' at you, SLAINE and THE A.B.C. WARRIORS!), so this is the perfect place to get in on the ground floor. 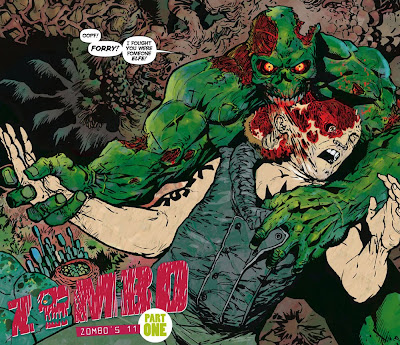 In short, ZOMBO: CAN I EAT YOU, PLEASE? is a thoroughly entertaining breath of fetid air and I wholeheartedly recommend picking up the collection, the first of what I hope will be many. Now, if only they'd put out CRADLEGRAVE in a collected edition...
Posted by Bunche (pop culture ronin) at Thursday, October 28, 2010

I had a talk with Matt Smith (Mighty Tharg!) and he said they might release Cradlegrave with one or two other horror stories in an anthology book next year.