MERMAIDS ON THE MIND: LORI LEMARIS 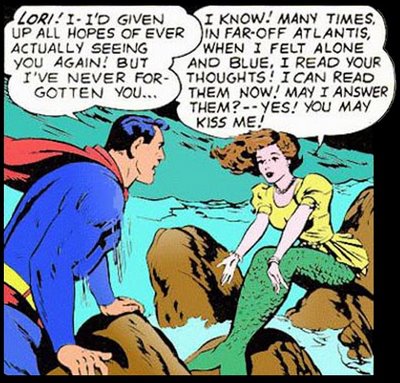 I've always been a sucker for a good love story and really good ones in the comics are pretty rare. Everybody knows about Superman's situation with the often obnoxious Lois Lane but the Superman romance that resonates most for me is that of his self-admitted first love, namely Lori Lemaris, a beautiful vision from the lost city of Atlantis, as first chronicled in "The Girl from Superman's Past" (SUPERMAN #129, 1959), drawn by Wayne Boring (one of the key Superman artists) and written by Bill Finger, the co-creator of Batman. Who knew the guy was such a romantic?
Back in his college days, young Clark Kent was kicked upside the head by love when he met a mysterious, wheelchair-bound coed with a trace of a foreign accent. One look in her eyes and it was all over. 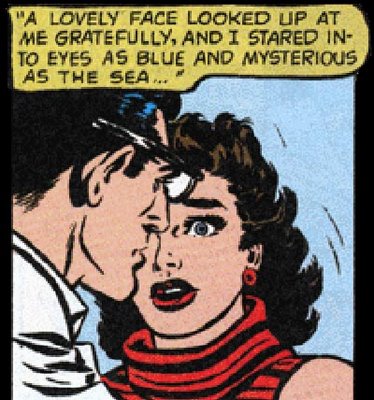 The two shared a deeply-felt romance, filled with quirky moments such as Lori's apparent ability to communicate with sea creatures and to spontaneously come up with cover explanations whenever Superman showed up and Clark was nowhere to be found. In no time Clark decided Lori was the woman he wanted to be with for the rest of his life, but he feared his career as Superman might put her in danger. How much was Clark into Lori? So much that he decided to chuck the whole superhero thing and settle down, that's how much! But when he proposed to her, Lori revealed to Clark that she already knew his secret and firmly stated they could never marry because they were from different worlds. As circumstantial evidence pointing to Lori being a spy piled up, Superman soon unraveled her fantastic mystery. You guessed it: Lori was a mind-reading mermaid sent from Atlantis to report on the progress of us surface-dwellers. 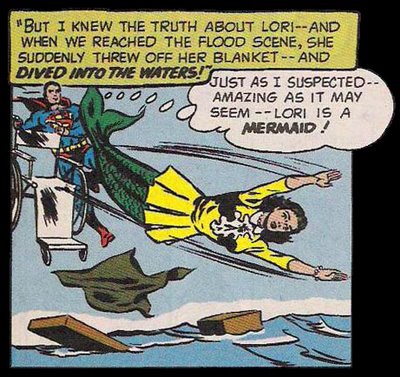 Her mission more or less over and her cover blown, the lovesick Lori had to return to her people and that was that, leaving behind a broken-hearted Man of Steel, but it's hard to keep a good character down and Lori returned on several occasions, eventually marrying a surgeon from among her people and settling in as one of Superman's closest associates (much to Lois's chagrin). 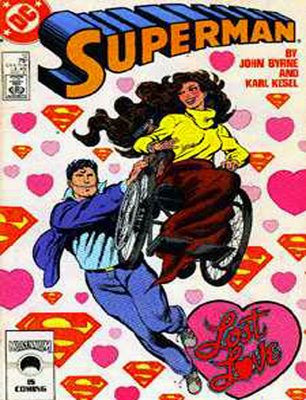 When DC Comics decided to modernize/reboot the whole Superman mythos in 1986, writer-illustrator John Byrne had the good sense to make sure Lori Lemaris was a part of the mix. Her story was retold with a couple of modern tropes (while underwater Lori is tastefully topless, and when dry her fish tail becomes legs, obviously influenced by SPLASH!) and the tragedy amped up considerably; as Superman recalls their time together, we find out that after they parted he and Lori would sometimes get together, and during one such time a crazed fisherman killed her with a harpoon. But if you regularly read comics you know that death is often just a pause in a character's arc, so Lori turned out not to be dead after all, which lead to some very interesting complications in the Clark/Lois dynamic, plus to say nothing of allowing the artists to have fun drawing a hot mermaid. (During my time in the DC bullpen I even got to draw Lori by way of an art correction, but I couldn't find that image online). 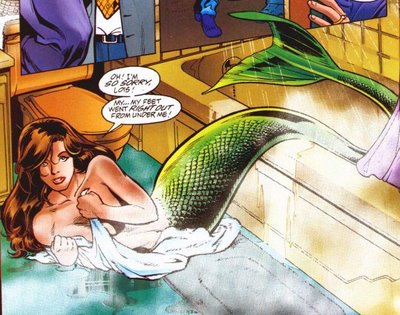 And thanks to the craptacular crossover "event" INFINITE CRISIS, Lori's apparently dead again, but I eagerly await her return. 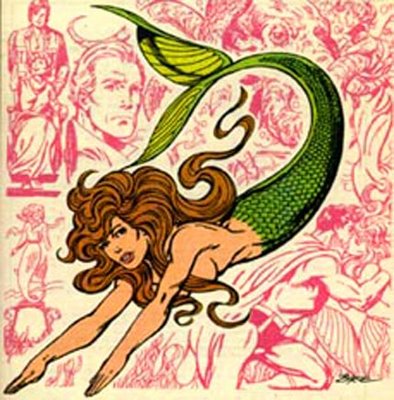 I dunno, mermaids, though beautiful from the waist up, seem kinda...slimy and potentially stanky - you know, REAL ocean type thing.

And there we have the inevitable fishy/stank pussy gag, and as the first comment no less. Only took a couple of hours.

She's pretty cute. The trouble with mermaind in general for me is not that they're slimy, but that they're chaste what with those built in chastity belts and absence of girl parts. Good choice for Superman though since he can't have sex (yeah, I read Larry Niven’s "Man of Steel, Woman of Kleenex").

Well at least Byrne's reboot granted Lori the gift of occasional girl parts. But I never quite bought Clark not figuring out her secret simply because if I had her in my arms I would have tried to grab her bum, and that would have been a giveaway and a half. And for those who haven't read Larry Niven's "Man of Steel, Woman of Kleenex," it's available online.

Superman was probably just trying not to crush her in his super arms.

You're probably right. I mean, the guy can squeeze a piece of coal and produce a diamond in a wink, so he'd have probably turned her butt into a Burger King Whaler sandwich, economy size.

Wow, you are a sucker for those underwater characters. Lori Lemaris? You really have to want to live under the sea to be a fan of hers.