COMIC BOOK COVER OF THE WEEK 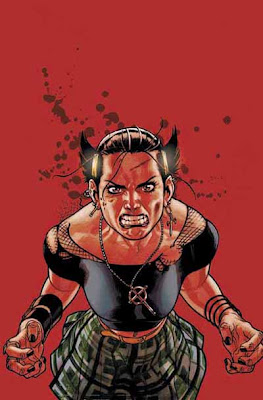 Created by Gail Simone — whom I must get around to interviewing one of these days — and first seen in BIRDS OF PREY #75 (January 2005), Alice is the bad news Goth chick writ large and sporting some serious mystical mojo. Now that Tony "Tailenders" Bedard is back to scripting BOP he'd better keep giving me regular dose of Alice; just this morning I put out a request to suggest to the powers that be at DC that Alice be given her own book, or mini-series at least, since magic-users (or borrowers, in this instance) in the DCU pretty much suck to read about, and her medicated teen angst makes for a fun contrast to Zatanna (only other DC mage nearly always worth reading about, even when she's betrayed by sub-par artists). If you aren't familiar with Black Alice, I urge you to give her a chance (and check out Tony's writing on BOP. Fun stuff!)
Posted by Bunche (pop culture ronin) at Friday, May 23, 2008

That cover caught my eye too but I'm still sick of "People just standing there" covers.

Speaking of Birds of Prey... beware - the GOOSINATOR!