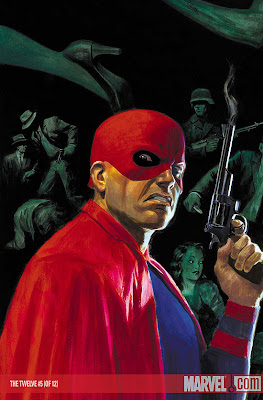 After work yesterday I swung by the local comics shop in my neighborhood to say hi to Dogwelder, a fellow comics and movie goon, and when I entered the store he asked, "Hey, Bunche! Do you know the guy who draws THE TWELVE?" My pal Chris Weston draws that series, so I answered in the affirmative and then asked him why he wanted to know. Dogwelder simply said, "Check out the first page of the new issue," so I opened up the issue and was surprised to see the latest chapter opening with a sequence taking place in a dining establishment named "Bunche's Diner." Lemme tell ya, there's something marvelously surreal about opening up a comic book and reading one's own surname, especially one as relatively uncommon as mine, and I burst out laughing when I saw it.

When I got home I wrote Chris to thank him for that surprise, and also asked for a jpeg of page 1 for use here on the Vault. Here's the image, sans lettering and colors (click on it to enlarge): 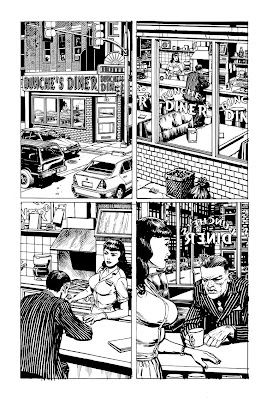 I may have to get the diner's logo printed up on t-shirts.
Posted by Bunche (pop culture ronin) at Thursday, May 15, 2008

you should throw your transmet bartender shot on the back :)

Now that's seriously cool. And yes, you should have tshirts made with the logo.

That is a most excellent t-shirt idea. And I also want to go to Bunche's diner. So mouth-watering!

I have started using cafepress.com. It's print on demand. I just made some journals, and I bought a coffee cup with a donut on it drawn by rick parker.
Hugs,
Stephanie