WHEN INSOMNIA PAYS OFF: DISCOVERING THE AWESOMENESS THAT IS UNGDOMSKULEN

Upon returning to Brooklyn from the Mother's Day weekend in Westport, I went to bed as usual, dreading the start of the work week the following morning and hoping that Nigella Lawson would have somehow gotten lost and ended up on my face. Sadly the Lawson scenario did not pan out and I drifted off to sleep, only to find myself awakened at 2:45 AM by the incredibly loud idling of a garbage truck outside my building. After about five minutes the truck headed down the street to remove more of the block's detritus, but, alas, I remained wide awake, so I took the time to cruise the web and do a bit of channel surfing. The offerings on TV at that hour are almost always a disappointment and the only thing on that was worth watching was the Bruce Lee classic THE CHINESE CONNECTION, but I opted against watching that favorite because it would have only served to pump me up, exactly the opposite of what I was looking for.

I would have had a myriad of late night TV distractions to choose from had I still been living on Manhattan's upper west side during the early 1990's, thanks to the excellence of the Manhattan Neighborhood Network (aka MNN), the fancy-schmancy way of saying "public access," and boy do I miss those bygone days. The only other public access programming I'd seen that I could weigh it against is the largely family safe stuff found on Connecticut's airwaves, and that stuff doesn't even begin to hold a candle to the twisted and often illegal material found in the Big Apple; the Senator Jerry Jer Show was the lone exception, featuring as its host a foul-mouthed black dude with a (simulated) bloody maxi-pad adhered to his forehead who, among other vital issues of the day such as his flagrantly uncensored hatred for a multitude of celebrities and public figures, liked to discuss how he's "dying to fuck a retarded bitch." 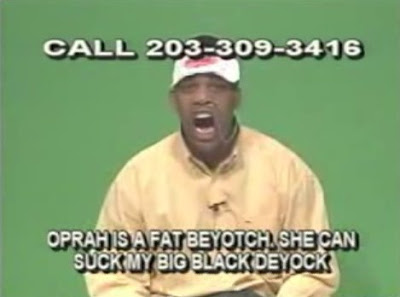 I only got to see this guy sporadically, when I visited my mom or when my buddy Chris remembered to tape the show, and I loved every sophomoric second of it.

The sordid wonderland that was the MNN during the early-to-mid 1990's more than made up for the deficiencies in filth and weirdness on Connecticut public access and I had the good sense to tape twelve VHS tapes-worth of it, including talk shows hosted by garish drag queens, a show in which heroin addicts actually demonstrated how properly shoot up — I swear to God!!! — , a Brazilian activism forum that was for some reason hosted by an irate guy with half a cabbage on his head, Life With Jeem (a show so balls-out bizarre that it's worthy of its own separate post), creepy religious children's shows hosted by disturbing puppets, "you are there" filmings of actual brandings and penis piercings, med school training footage of male genital dissection (something I seriously do not recommend wandering in on after an eight-hour tequila and beer bender), the unintentionally hilarious rantings of those berobed an turbaned black dudes who consider themselves "the true Israelites" (their ruminations on homosexuality in the Bible being flat-out hilarious and un-PC to a staggering level), and the demented Sick & Wrong, a show that lived up to its name in ways that make you shit, especially the episode that made me stop watching that series, in which the show's creators beheaded a live Iguana on camera simply for shock value; I'm down with all manner of sick shit, as long as it's consensual and no one is hurt, but I don't condone animal cruelty in any way, shape, or form.

Then I moved to Brooklyn and found out how comparatively tame Brooklyn Community Access Television, or BCAT, is, but every once in a blue moon I'd find worthy stuff like the fantastically machismo-driven Spic 'N' Spanish (a wacky Puerto Rican guy runs around strip clubs and beaches interviewing bikini-clad mamis and naked Hispanic strippers, one of whom memorably offered girls tips on how to prevent their inner labia from looking like roast beef), a half hour for an aging metalhead to run rare clips of bands from the seventies and expound upon how he wouldn't be the man he is today without the influence of AC/DC's Bon Scott, a so-bad-it's-great video in which an alien (a guy in a "Gray" mask and sweats) rocks feeble lyrics about his excellence as an "intergalactic rapper," and assorted video shows that ran music segments and excerpts from gory exploitation movies. But in recent years BCAT has been dominated by an endless parade of bling-bling-laden rap videos, most featuring the overused tropes of voluptuous black chicks in thongs, much pouring of champagne while strolling through tableaux of flashy cars and ostentatious mansions, and the "artists" in question modeling fur coats and a surfeit of tacky gold jewelery while bragging about their material possessions and "bitches." I hate that shit, and after a while it seems like one very long and bad blaxploitation musical as one cookie-cutter video follows another, so I pretty much gave up on BCAT about two years ago, with the exception of the excellent old school children's horror frolic/cheesy showcase for rockabilly acts Ghoul A-Go-Go. 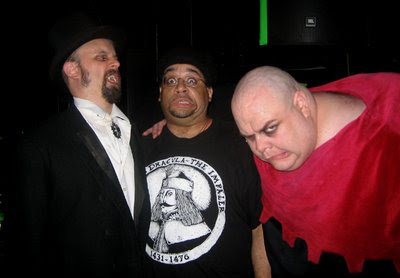 Yer Bunche meets Vlad and Creighton, the hosts of Ghoul A-Go-Go, the only worthwhile entertainment program on Brooklyn Community Access Televison (BCAT), at a Cramps show nearly two years ago.

Which finally brings me to a revelation that happened during my Monday morning bout with insomnia.

Somewhere around Jesus o'clock in the morning, I flipped past the usually dormant at that hour BCAT and saw a wild-assed video by some band whose beer-gutted guitarist was partially rendered in computer assisted "cutout"-style animation. Acting quickly, I grabbed my VCR's remote and hit "record." The guitar-wielding fatass made me exclaim "What the fuck is this?" as the acid-flashback backgrounds reminded me of something from an installment of Old Gray Whistle Test and my attention was riveted by the goofy teddy bear bonnet that garnished his bespectacled pate. 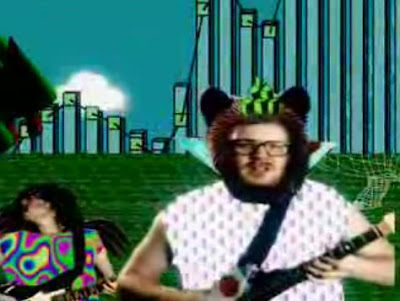 While absorbing this lysergic infusion, my sleepy mind was hypnotized by the strange music issuing from the TV's speakers, and I fell deep into the song's strange groove and began to head-bang. When the video ended there briefly flashed a blurb crediting the tune to a band named "Ungdomskulen," and the song itself was entitled "Modern Drummer," but before I could commit those bits of info to memory the scene shifted to what I guess may have been the green room at BCAT. In this space were about twelve primary school children of every possible ethnic/cultural background, several of whom offered up their candid opinions on the band and the video, and with the exception of one Hispanic kid all of the reviewers were overwhelmingly negative in assessments, particularly one under-ten-year-old black girl who labeled the video "childish" and declared that the band obviously needed more practice before having the nerve to step in front of a camera again, at which point the show's credits began to roll.

It was an hilarious stroke of genius to have a bunch of kids critique a band that was about as far removed from what they're exposed to on TV and the radio as possible, and the looks of outright, stunned confusion on their faces was priceless. My own confusion over Ungdomskulen spurred me to seek out their video on YouTube, and once I found it I must have played it at least eight times, allowing "modern Drummer" to thoroughly hypnotize me, and thus hypnotized I plan to pick up their debut album, "Crybaby," as soon as possible. And while they may have a death metal-sounding name and come from Norway, Ungdomskulen is a bizarre and seriously talented combo whose sound could be described as metal/jazz/post-punk/psychedelic fusion, and their musicianship is beyond reproach. Here's the video so you can judge for yourself:

So at last I got something out of being awake in the wee hours on a "school night."
Posted by Bunche (pop culture ronin) at Tuesday, May 13, 2008