GOOD LORD, HOW I WISH I'D THOUGHT OF THIS

Let's face it. Porn has existed in some form or another since the second humans — particularly male humans — climbed down from the trees, and while the human body is certainly a beautiful thing much of the imagery found in stroke material looks awkwardly posed and completely ridiculous, and can be unintentionally humorous depending on the image. That theory has been applied to other totally innocuous material for who knows how long, best exemplified by graffiti that adds huge, hairy-nutted spurting cocks to innocent billboards, posters and subway adverts, and countless other examples of rendering stuff meant for public consumption gleefully filthy (I probably owe the educational system of Connecticut a fortune to replace the dozens of school texts I rendered completely obscene between 1977 and 1983 in an effort to alleviate in-class boredom). A prime example of such merry smutting-up is this once-elegant poster promoting the arts : 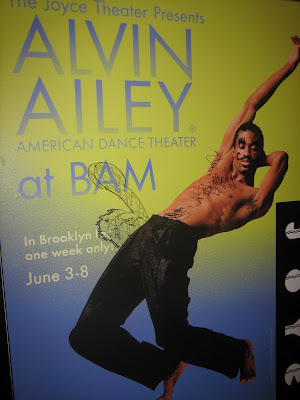 This poster went up in my subway station just yesterday, and in less than twenty-four hours the dancer had been augmented with a crudely-drawn, Tom-of-Finland-enormous schvanztucker.

But now there's a new and downright hilarious twist on this favorite form of self-expression, and that's the brilliant art of "Ex-Porn," namely taking utterly pornographic photos and drawing over them, adding cartoony details that obscure the dripping genitalia and literally in-your-face sex acts, turning sheer filth into pictures suitable for inclusion in children's books. Case in point, this depiction of a cowboy and his Injun pals:

There's nothing naughty going on here; it's just a cowboy awaiting a hit off that peace pipe, while a brave lights a fire to keep everybody warm.

I won't spoil any of the rest of it for you, so just go to the site and witness the hilarity for yourself. And if you find this stuff as amusing as I do, be sure to leave comments so this genius will produce more. I think it'd make for a terrific coffee table book!
Posted by Bunche (pop culture ronin) at Thursday, May 22, 2008