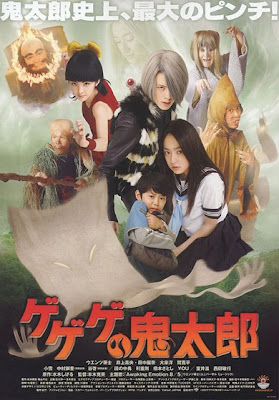 In recent years the Japanese film industry has rebooted many of the classic manga properties as live action features, especially now that special effects technology has caught up with the wild imaginings of the comics' creators. Unfortunately the majority of the reboots are turgid, uninvolving bores that amount to nothing more than something that could be used as a studio's FX resume reel, and that's a major disappointment when one considers just how awesome projects like DEVILMAN and TETSUJIN #28 (better known to us western barbarians as GIGANTOR) could have been if they had scripts that lived up to the visuals; DEVILMAN was especially trying since the studio opted to attract a larger audience by making Go Nagai's famously gory and ultra-violent story more teen-friendly, consequently cutting the balls off of a genre classic. In fact, if you ask me the only genuinely good and thoroughly entertaining classic manga reboot was the charmingly goofy CUTIE HONEY from 2004, based on another Go Nagai classic and also cleaned up for a larger audience. Or should I say it was the only good manga reboot until now?

Considering that it's a product of a culture with one of the world's richest myth-bases, it was only a matter of time until the venerable GE GE GE NO KITARO (loose translation: "Kitaro of Ge Ge Ge Forest") got the live action treatment. For a decent overview of this manga and anime landmark, check in over at the Wikipedia, but the short version is that creator Shigeru Mizuki's stories revolve around Kitaro, a spirit — or yokai — boy who lives in creepy Ge Ge Ge forest with his equally supernatural family and friends, a wild assortment of creatures culled from Japanese myths and legends. Kitaro is something of a nexus between the human and yokai realms, coming to the aid of humans who fall afoul of the more sinister of his brethren, and much humor and magical mayhem ensues. 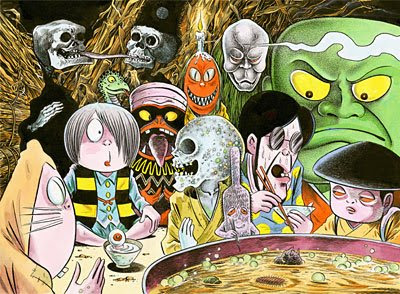 Kitaro and friends, as seen in the manga.
Kitaro and friends have been animated several times, both for television and the movies, and I love them without reservation. There have been countless international takes on the whole supernatural co-existing alongside our mundane existence thing — BEWITCHED and Harry Potter being the two examples that spring immediately to mind — but none have the charm and sheer fun found in Mizuki's works, and I'm very happy to say that none of it is lost in the translation to live action. 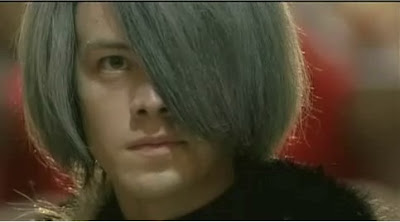 As "progress" causes the forests of Japan to dwindle the indigenous spirits are being driven from their ancestral homes, and they're none too happy about it. A bunch of Kitsune, powerfully magical and ancient fox creatures, seek to drive out the inhabitants of the housing developments going up over what used to be their forest by any means necessary, and hire the disreputable Rat Man (Yo Oizumi) and his gang of monsters-for-hire to get the job done. Tired of being (harmlessly) terrorized by the unruly yokai, a little boy who dwells in the development sends a letter — via the supernatural mailbox located deep in a nearby forest — to good guy yokai Kitaro in hope that the spirit can get the other monsters to knock off their nightly harassment, and Kitaro soon puts things right. But that's just the first ten minutes of the film, which leaves plenty of time for world-class asshole Rat Man, the yokai answer to Eric Cartman, to get up to more self-serving mischief, namely stealing a magical gem of incredible power from the Kitsune so he can hock it at a human gem dealer's shop (NOTE: humans know that monsters exist, so this isn't that big of a deal, although some humans still need a bit of convincing). 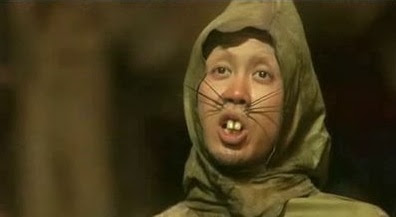 Yo Oizumi as the amusingly offensive Rat Man: if ever there was a towering douchebag who just doesn't give a fuck, it's this guy. And, God help me, I love him.

This theft sets all manner of mishegoss into motion, and it's up to Kitaro and his bizarro group of friends to save the day lest an angry Kitsune lord destroy the human world and rebuild things under his own rule.

GE GE GE NO KITARO is a hell of a lot of fun and a visual feast featuring a who's who of mythological critters, seamless CGI and makeup effects, a yokai nightclub that you'll want to hang out at, and the latest rendition of the famous and infectious Kitaro theme tune, a song familiar to native anime fans since the 1960's and heard in every filming of the series since. I can hear it even now: "Ge...Ge...Ge Ge Ge no Ge..." (And you can too if you click here for a link to three of the animated series openings, ranging from the B&W sixties intro through the current TV version.) Plus there's a doomed romance between immortal Kitaro and a human girl thrown in for good measure; Kitaro's dad warns him against getting involved with a mortal female because humans can die, something of which he is only too painfully aware. And while the movie is based on a children's comic, what may fly as suitable entertainment for kids in Japan doesn't necessarily work over here insomuch as the look of the monsters and some of the effects could be perceived as scary by the very little ones in the audience, so know your tyke's limitations before throwing this one into the DVD player. I'd say this is safe for the six-and-olders, but I'm going to give a shot to sitting my four-year-old niece Cleo through this (the subtitles may pose a bit of a problem, but I'll fill her in on what's going on).

Bottom line: if you're unfamiliar with the monsters of Japanese myths and legends, creatures as well-known over there as Dracula, Frankenstein, Jason, and Freddy are to us, TRUST YER BUNCHE and immediately rent GE GE GE NO KITARO. It's out on DVD in the States as the second feature on a disc shared with SWORD OF ALEXANDER (which I haven't watched yet; I bought the disc solely for KITARO), and for more yokai fun I also recommend — though not as strongly — YOKAI MONSTERS: 100 MONSTERS (1968), YOKAI MONSTERS: SPOOK WARFARE (1968, the best of this series), YOKAI MONSTERS: ALONG WITH GHOSTS (1969), and THE GREAT YOKAI WAR (2005). And keep your eyes open for the upcoming sequel, GE GE GE NO KITARO: SONG OF THE THOUSAND-YEAR CURSE, which is allegedly aimed at an older audience, so expect some effed-up scares as only the Japanese can bring it!
Posted by Bunche (pop culture ronin) at Wednesday, May 14, 2008