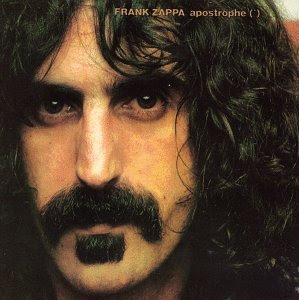 Last night I was chatting with a friend who's deep in the mires of grad school final exams and term papers and while describing the pressure of cramming for tests and composing essays on various subjects, she mentioned that she had to write a piece on a movie or a pop album that she was unfamiliar with and that the work she chose was Frank Zappa's "Apostrophe" album. Considering that she's a self-professed Zappa fan I was shocked to discover she'd never heard that particular album, one of the artist's most popular offerings. I mean, the lady got drunk all night with me on cheap tequila as I played hours of Zappa albums when I found out he'd died back in December of 1993, so how was it possible she'd missed "Apostrophe?"

Before I go any further I'd like to state that much of Zappa's body of work is among my favorite music and I devoured his recordings from the time I was thirteen through my fourth year of college, initially appreciating his ever-so-filthy and absurd lyrics and song-stories and later looking past the dirty stuff to pay attention to the intricate compositions and fine musicianship from Zappa himself and a legion of exceptional collaborators (where are you now, Ruth Underwood?). So when I speak about the ins and outs of Zappa albums, I have a pretty good grasp on the subject. No casual observer, me.

Anyway, once I got over my initial state of shock at such a major lapse in her Zappafication, even taking into account the guy's enormous catalog — fifty-seven albums released between 1966 and 1993, and that's excluding the many posthumous releases — , I offered to relieve some of her workload by writing her paper for her, but she politely declined and instead asked me to jot down some notes by way of something to get her started, as well as handing her a copy of the CD. So as I wrote the requested notes I found myself with enough material for a Vault post, and now that I've finally tackled one of the major Zappa LP's, I intend to cover as many as possible in the future. Thank Zoad I'm my own boss on this site and have no real deadlines! And with that, on to the review.

Following hot on the heels of the previous year’s “Over-Nite Sensation,” “Apostrophe” is a favorite among Zappa enthusiasts thanks to being a concise showcase of all the qualities that make for the total package of the Zappa experience, namely strong and intriguing compositions and musicianship that form a hypnotic blend of jazz and rock, along with comedic, silly narratives and lyrics (with the ribald material kept to a surprising minimum this time out), delivered in a half-hour helping. The brevity of “Apostrophe” also renders the material much more accessible to the casual listener, allowing the loony narratives and cartoon voices to work in perfect confluence with the music, largely eschewing the lengthy and sometimes self-indulgent instrumentals on other Zappa offerings that only hardcore Zappa fans and musicianship scholars (both armchair and professional) are willing or capable of sitting through. And you can play this one for your kids and not have to worry over them asking embarrassing questions about what a “pre-moistened dumper” is or why it was significant that “daddy got a stinky finger in those days of long-ago,” to say nothing of them learning how to sing “Fuck me, you ugly son of a bitch” and “Stick out your hot, curly weenie” in German. (However, if you do want your kids to learn and ponder such mysteries I suggest you direct them toward the later Zappa albums “Sheik Yerbouti” and “Joe’s Garage, Act II.”)

Side One opens with four tracks — collectively known as the “Yellow Snow Suite” — that flow from one into another and tell the combined stories of Zappa’s dreamscape adventures as an Eskimo named Nanook, locked in vicious mortal combat with a fur trapper who assaults baby seals (“with a lead-filled snowshoe”), and the injured fur trapper somehow stumbling to the parish of one St. Alfonzo (whoever the hell he may be). Upon reaching this holy establishment, the fur trapper is suddenly forgotten in favor of Father Vivian O’Blivion’s lively preparation of pancakes for his congregation while simultaneously coming up with a new dance craze (“The Funky Alfonzo”) and pondering the previous night’s masturbatory tryst between a Leprechaun and a sock. Let me tell you, it’d all make for one hell of a bizarre animated short! The remaining track on this side is the soulful “Cosmik Debris,” in which Zappa’s character encounters a spiritual charlatan, “the Mystery Man,” who promises to help him reach Nirvana “for a nominal service charge.” Zappa’s character sees through the con-artist’s bullshit and reveals his own mystical abilities, easily hypnotizing the guy before stealing the Mystery Man’s rings and pocket watch. Hey, man, one good ripoff deserves another.

Side Two opens with “Excentrifugal Forz,” a mercifully brief (though good) example of the extended guitar masturbation that would become commonplace and cause portions of later Zappa albums to drag. That track is followed by the funky/trippy “Apostrophe,” a terrific instrumental piece that packs a mesmerizing groove and sounds a hell of a lot like what Funkadelic was up to back then (I actually burned myself a CD of nothing but "Apostrophe" on repeat and I someday hope to find a woman who is amenable to letting me eat her pussy throughout its running time; it's a long disc, so she may be unconscious when it's over). Up next is the mordantly hilarious “Uncle Remus,” told from the point of view of a black guy who’s pissed off about the economic disparity and racial tensions between blacks and whites, including comments on how it sucks to be sprayed with a hose during the winter and a description of his pre-dawn acts of vandalism such as driving to Beverly Hills to “knock the little jockeys off the rich people’s lawns.” The album’s closing track, “Stinkfoot,” returns to the dreamish territory of the opening track, in essence bringing things neatly to a full circle conclusion, and fills the listener in on the horrors of Bromadrosis, aka smelly feet. That bit of educational narrative segues into a noodly guitar bit eventually interrupted by the narrator’s dog, Fido, telling his owner “Once upon a time, somebody say to me, ‘What is your conceptual continuity?’” Once Fido voices his conclusion that “the crux of the biscuit is the apostrophe,” the philosophical (?) debate degenerates into the dog-owner’s litany of denial at the dog’s theory before the album fades out, leaving satisfied listeners scratching their heads and asking “What the fuck was that supposed to mean?”

Clocking in at just over thirty-one minutes in length, “Apostrophe” is a stone hoot from start to finish and absolutely counts as one of the essential Zappa works. Hell, I put it in my Top Five, nestled somewhere among “Over-Nite Sensation” (1973), “Sheik Yerbouti” and “Joe’s Garage: Acts I, II, and III” (both 1979), and the criminally-underrated “Thing-Fish” (1984).
Posted by Bunche (pop culture ronin) at Thursday, May 22, 2008

Thanks for the crib sheet and crib disc--it's great stuff. I wish it were my report; I'd get an A, but it's a great shortcut to a better grade. Your blog's in my works cited list.

I just found out I got an A on my "Apostrophe" paper. I cited you and your enthusiasm extensively--you were the best part, except maybe my attempt to compare Fido to Walter Kaufman.