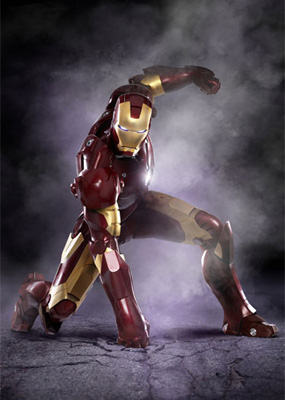 Of all the comic book superheroes out there, I never in a million years thought I would end up in a movie theater watching a film about Iron Man, so if you’re skeptical about that prospect, like I was, I’ll put it to you succinctly: if you’re looking for wall-to-wall superhero set-to’s, a mindless script and gratuitous destruction, then you’ll probably be disappointed with IRON MAN. However, if you’re in the mood for a superhero flick that respects its source material, treats the audience as intelligent and creatively re-tools one of Marvel Comics’ flagship heroes to bring him and his supporting cast into the 2000’s, then IRON MAN will come as a very welcome break away from the usual pitfalls of the superhero genre. (Well, mostly, but I’ll get to that shortly.)

The film basically updates the story of how gazillionaire hedonist/playboy/genius inventor/munitions manufacturer Tony Stark (Robert Downey, Jr.) realizes his technological innovations have real world repercussions after he sustains a serious injury following the demonstration a new weapons system in Afghanistan and falling into the hands of hostiles. Ordered to build weapons for the bad guys, Stark, with the aid of another captive techocrat, instead builds the prototype for his famous armored alter ego and escapes after utterly decimating the enemy encampment. 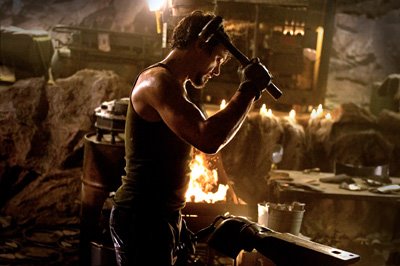 After that it’s a series of double-dealing corporate machinations on the part of Stark’s partner, Obadiah Stane (Jeff Bridges), while Stark refines the Iron Man armor and endeavors to take out the bad guys who have somehow gotten their slimy mitts on shipments of his munitions, weapons they use to enact a campaign of terror and genocide.

IRON MAN’s main theme is the “with great power comes great responsibility” thing again, and it works quite well, especially since the story focuses on actually developing the characters to a degree seldom seen in a superhero popcorn-muncher. The clever script has a surfeit of great lines that propel the story along at a good pace, never allowing the dead spots frequently found between action sequences in films of this ilk; there are roughly three or four major action pieces over the two-hours-plus running time and while the whole film is loaded with special effects, the opticals are never anything more than a natural part of the story, looking exactly like one would imagine such sci-fi machinery and its capabilities would look like if seen in real life. The CGI work never looks as sterile as it often does in big-budget FX movies, and that can’t help but add to the believability of the proceedings. 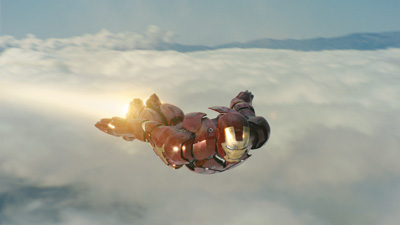 However, if IRON MAN does have one major flaw, it’s that the film kind of coasts to a perfunctory resolution after a very strong first two-thirds; I wonder if the filmmakers felt that after so much strong character stuff the audience would need to have it balanced out with a predictable showdown between Iron Man and another bigger, more formidable armor-clad foe. That was part of the formula in the comics that turned me off to Iron Man for a very long time, each story concentrating mostly on whatever new armor the writers could come up with, or throwdowns against other armored types such as the Crimson Dynamo and the Titanium Man. I was interested in characters, not combat-armored gladiators engaging in a variation of Rock ‘Em Sock ‘Em Robots, but what I constantly found in the comics was simply a narrative about a high-tech wardrobe, fashion bitchery taken to a ludicrous, would-be macho extremes, and that’s kind of what the film’s climax becomes. But the stuff that comes before is very much worthwhile, and though the ending is a bit lackluster in comparison, IRON MAN is definitely worth sitting through, and I look forward to the next installment.

As for the things that make the movie better than the average celluloid spandex opera, one must start with the fact that Downey makes a terrific Stark, brimming with personality and privileged joie de vivre, his exuberance still showing through once he cops to the atrocities he’s unwittingly contributed to and gets down to making amends heavy metal-style. 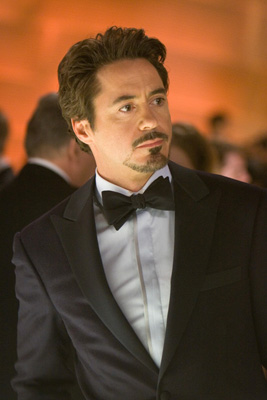 Robert Downey, Jr. as Tony Stark: reason number one to see this film.

Stark’s so much fun that I could have sat through a whole film of nothing but him having adventures chock full of partying and wanton encounters with armies of one-shot lovers, completely removed from his bitchin’ armor.

The real surprise for me here is Gwyneth Paltrow as Stark’s uber-efficient assistant Pepper Potts. 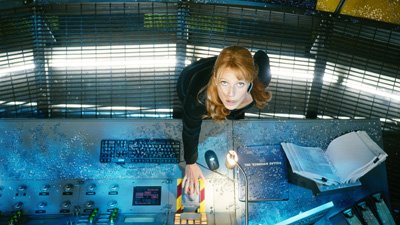 The Pepper Potts of the comics was yet another example of Stan Lee’s complete and total inability to write female characters, standing as one of the more bland examples of his shrinking violet, helpless women who served no other purpose than to moon over the protagonist in ways guaranteed to make readers puke all over their Chuck Taylors. Pepper is here reworked into a Gal Friday who’s clearly more together than her boss is, giving the kind of business and personal support that he needs while also providing a perfect foil in the manner of male-female interplay found in classic Hollywood comedies. I really liked Pepper and utterly believed her as an equal to Stark, which says a lot because I have never cared for Paltrow’s icy, replicant-like demeanor, lumping her in with that other icy screen “goddess” of recent years, Nicole “you could keep a six-pack cold between my legs” Kidman. Hopefully the filmmakers will realize just what they have in Paltrow’s take on Lee’s cliché creation and give her even more screen time in the inevitable sequel. 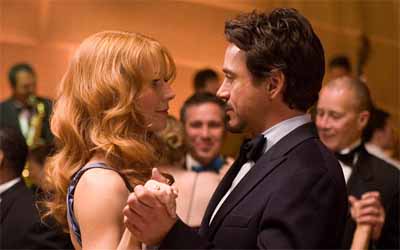 Pepper and Stark cut a rug.

Terrence Howard and Jeff Bridges are given less to do as Stark’s Air Force buddy and best friend James “Rhodey” Rhodes and Obadiah Stane, but they serve their parts admirably and Rhodey came off much better than I expected. Bridges as Stane is a decent villain with a few nice character touches until the aforementioned narrative drop-off during the film’s final third when he figures majorly into the film’s rote climax, and by that time the viewer may have lost all interest in him (like I did).

Among the film’s bonuses are the unobtrusive use of various heavy metal/thrash tunes on the soundtrack — Suicidal Tendencies’ punk classic “Institutionalized” being enjoyed while Stark tinkers in his lab/garage is an amusing moment — and the use of the 1960’s animated Iron Man theme in Vegas’ed-up and John Barryesque instrumental versions during scenes of Tony Stark gambling and putting the pork sword to a comely reporter, an in-joke sure to please attentive geeks in the crowd. (Sing along with me: “Tony Stark makes you feel/he’s a cool exec with a heart of steel!”) And whatever you do, make sure to stay through the end credits; there’s a final scene that, as my friend Bill so accurately put it, is “the kind of thing that makes fanboys hard.”

Bottom line: I liked IRON MAN quite a lot, partly because I went in with a lifelong apathy toward the character and therefore had no high expectations, and because the script was more for grownups than I expected. It’s by no means perfect, but as superhero movies go it’s pretty damned good. TRUST YER BUNCHE and check it out.

Oh, and by the way, the trailer for the upcoming THE INCREDIBLE HULK makes that film look like ass, so stay tuned for a review when it hits the screen.
Posted by Bunche (pop culture ronin) at Sunday, May 04, 2008

I enjoyed it quite a bit, especially considering I never cared all that much one way or the other for Iron Man. Downey Jr., who WAS amazingly good as Tony Stark, made the movie.

The only ridiculous bits that really stood out to me was (Spoilers below, btw...)

1) The fact that Stark built a heart-sized super-duper, never-before-created fusion reactor in a cave in Afghanistan using essentially paper clips and gum was a bit hard to swallow.

2) Jeff Bridges has made a career out of playing cool, yet nice guys and I guess I had a hard time accepting him as the total fuckwad scumbag he played. He did a fine job, by the way, so perhaps it was me...

3) How is it Starks' heart reactor fit absolutely perfectly in the evil suit? You'd think they would have to do a teeny bit of retro-fitting.

4) How did Stane know instinctively how to use what had to be a super-complicated advanced armor suit with no training whatsoever? I mean, a super-genius like Tony Stark had a learning curve trying to get used to that armor.

5) The multicultural band of Al Quaida-like terrorists reminded me of the gang in Death Wish 3... Where was the fucking US Army when they were shooting off their super rockets????

Saw it yesterday and liked it quite a bit. Not being a fanboy by any means, the movie was all Downey for me. He's just a blast.

Iron Man, Batman, check it out!