STARK TRUTH: A LOOK AT THE MAN INSIDE IRON MAN'S ARMOR 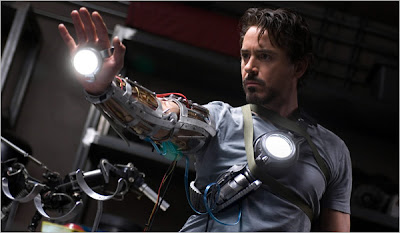 So the first non-animated adaptation of Marvel Comics’ Iron Man hits the big screen today, and it’s already garnered much kudos from the mainstream pundits for its intelligent script and capable performances that supposedly elevate it above the usual dull and predictable origin yarn. I’ll be seeing it tomorrow night, so expect a report at some time on Sunday. 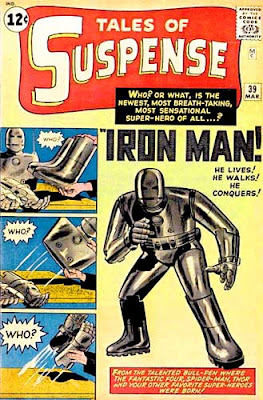 What genuinely surprises me is how much interest I have in this movie. While I've read a lot of Iron Man comics — thanks to my old friend Matt, a guy who was positively addicted to Tony Stark and his endless armor upgrades — I never cared for Iron Man unless he was a part of the Avengers; the tech element in sci-fi and superhero stories never really turned me on, and instead I found myself interested in the characters and what it was that drove them to their individual acts of heroism, and since Iron Man was by far the most tech-centric book out when I was growing up, it didn’t do much for me. 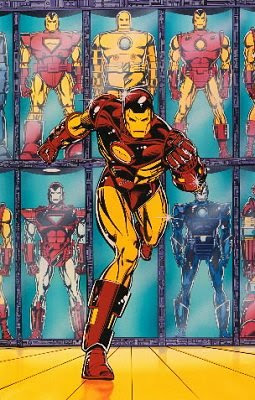 Iron Man, with just a sampling of his armored wardrobe (art by Bob Layton).

I don't know how much solo Iron Man you've read, but other than some stunning Gene Colan art a couple of years in it really wasn't that great, being just another of Stan Lee's overwritten soap opera/romance comics that just happened to feature super-folks in the leads, with Stark’s dependence on his armor’s chest plate to stay alive after a severe heart injury thrown in as an extra soap opera trope. Yes, it's a bitch of a physical handicap, but it wasn't anywhere near is compelling as the neuroses and human interest mishegoss that the Fantastic Four, Spider-Man, Thor, or even the Hulk went through; Stark was basically a glamorous rich kid while the rest of the Marvel superheroes suffered all-too-relatable heartaches and problems, thus making him hard to care about as anything other than armored muscle. A walking, talking arsenal, if you will. 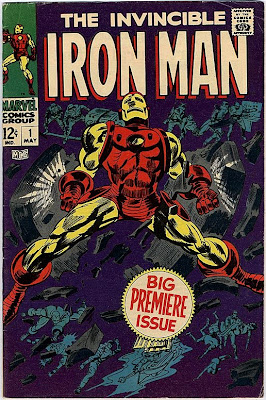 The early stuff is especially unreadable, being a jingoistic series of commie-bashing installments illustrated by Don Heck, a guy who was not at all suited to superhero work since he came from a romance comics background.

An example of the Red-baiting from the early years.

But that’s by no means slamming his skills; the guy could draw, but his figures were too elegant and fashionable looking to fit properly into the rough-and-tumble Marvel Universe and came off like well-drawn images from a book of paper dolls. Ever read any of his Avengers run, the stuff featuring "Cap's kooky quartet?" Bo-ring! 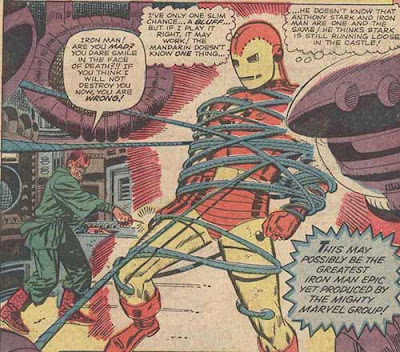 The only reason to read any of the early Iron Man is to witness the introductions of Hawkeye and the Black Widow, and later groove on the dynamism of Gene Colan. That's it. 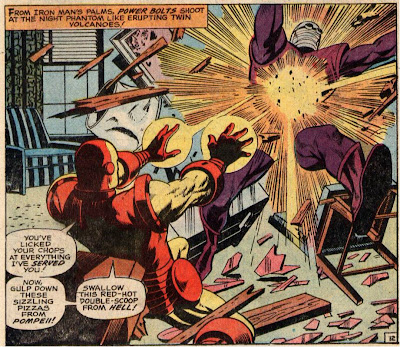 In my opinion — and just about anyone else's, for that matter — the only run of Iron Man that really deserves iconic status for both story as well as art is the Michelinie/Layton run of the late-1970's-early-1980's. Great stuff that gave us a lot of insight into what went on in the character's head and life, as well as introducing Stark's alcoholism — an issue he struggles with to this day — , “Armor Wars,” and many other memorable bits. 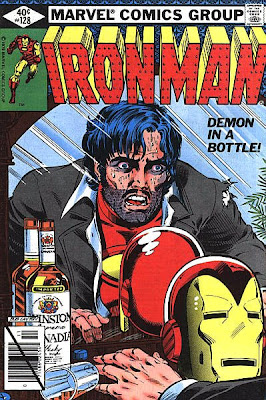 Stark finally twigs to his alcoholism (art by Bob Layton).

I particularly liked the introduction of Stark’s ace boon coon Rhodey, and the Viet Nam flashback featuring him and Stark bonding in the jungle while sharing a huge spliff. That bit would have gone over the heads of the younger readers, the spliff easily being mistaken for a strange-looking makeshift cigarette by the not-yet-corrupted, but we all knew what it was. 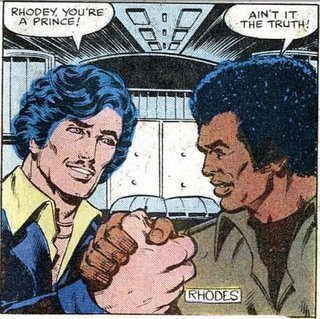 Stark and Rhodey: one of comics' great friendships.

Stark as a character is of far more interest to me than his incredible technology; oddly, rather than read about him doing his Iron Man thing, I prefer seeing Stark in his capacity as the creator of superspy organization S.H.I.E.L.D.’s more-Bond-than-Bond gadgets and gear. My pal Jared correctly summed up Tony Stark thusly: “Batman’s secret identity is the billionaire playboy, but we get to see what he does outside of the public eye and Batman doesn’t spend his time chasing women. Tony Stark, on the other hand, is a playboy, and has been with a parade of women.” Or as I would have put it, the guy’s seen more pussy than a litterbox. 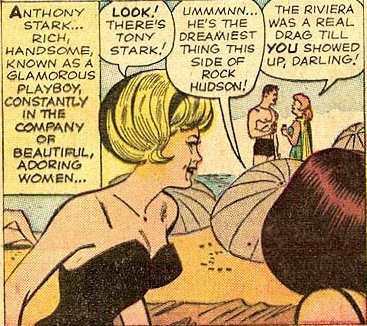 Comparing Tony Stark to Rock Hudson. If only they knew...

He’s a genius rich boy at play in the twin exciting arenas of cutting egde technology and pussy, fields that are daunting to most people, yet Stark handles both with deft aplomb. In recent years in his print adventures Stark publicly revealed his identity, was appointed Secretary of Defense, ended up running S.H.I.E.L.D., and, perhaps most impressively, survived a night in the sack with fellow Avenger and S.H.I.E.L.D. operative She-Hulk, all of which add up to make me finally admit that Tony Stark is the fuckin’ man. He’s a total pimp who literally wears his tricked-out Cadillac, and while I may not care for his solo exploits all that much, I have to give respect where respect is due.

So rock on Tony Stark, and I hope your movie doesn’t turn out to be the next SPIDER-MAN 3. 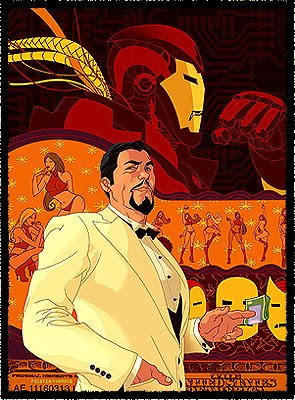 Ugh-- liked your brisk overview of Iron Man-- also enjoyed Greenberg's mini-review. I could not bring myself to face the opening day crowds up here-- all the crowding of the big city and none of the charm.

Everybody keeps telling me I really should give this a chance. But I don't see why. The ultimate for me is that I look at Robert Downey, I do not see Tony Stark. Oh well, maybe this weekend.

As for the real Iron Man! well, Larry Leiber wrote the first book with a lot of restraint. I never liked Heck at all, ever, even as a small kid. I especially was revulsed when I learned who Errol Flynn was!

Layton and Michelinie were the perfect Marvel pairing to helm the only technically-oriented character (biggest one anyway). The two had trouble with Marvel's elevators and light switches. Layton's so-called artwork never rose above fan-wannabe. If only the hundreds of art submissions had picked Layton instead of Byrne to claim they were better than and further, deserved a book on the strength of it-- I could not have disagreed and would have had to send them a plot and voucher.

If Layton and or Michelinie could have actually sucked Shooter's dick-- and it's not at all clear those events did not happen-- at least they would have been more honest about fawning over Shooter like a cheap romance novel.