A true case in point regarding the axiom that if something seems too good to be true, it probably is, the long-sought-after GERONIMO AND HIS APACHE MURDERERS #3 proved a great disappointment by being nowhere near as objectionable as its terrific cover would lead one to believe. 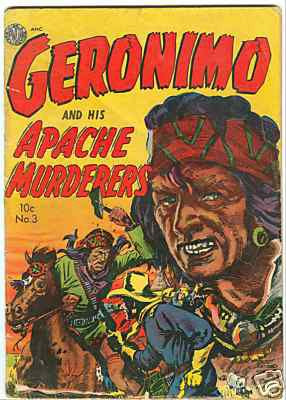 Seriously, the only way this lurid cover could possibly be improved in terms of "wild Injun" peril is if instead of having Geronimo attacking a cavalryman with a tomahawk it depicted a leering Geronimo, tongue hanging out like a rabid coyote, raping a topless, blonde, screaming Statue of Liberty on the prairie floor while separating her head from her body with a forearm-sized Bowie knife, preferably drawn by that master of sweaty, fluid-spewing, veiny-penised visual offensiveness S. Clay Wilson. But this comic was a product of the early 1950's, and such over-the-top moments of visual outrage would have to wait until some ten years later for the birth of what used to be known as underground comics.

Sadly, GERONIMO AND HIS APACHE MURDERERS is a rather tepid — if mostly well drawn — western mag common to the period, only with the stories ostensibly focusing on Geronimo and his vilified band of take-no-shit warriors, here portrayed as the stock "me no likeum pale face, Ugh!"-style Injuns seen in American pop culture since at least the early days of pulp magazines, radio, and "talkies." 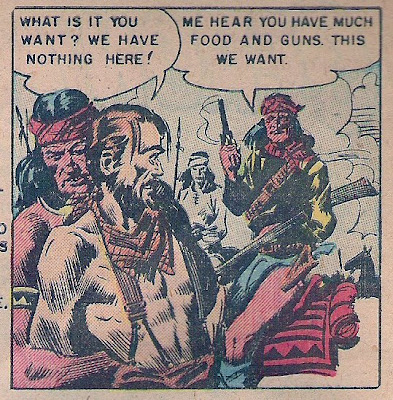 The two stories that feature Geronimo (and his Apache murderers, of course) both have our hero and his lads decimating innocent white people for the flimsiest of reasons before the cavalry shows up to set things right once more, and it's pretty boring stuff by today's standards, and was probably considered weak even when first published, especially considering that this was the era that saw the E.C. stable — TALES FROM THE CRYPT, THE HAUNT OF FEAR, THE VAULT OF HORROR, and others — scaring the living shit out of parents everywhere thanks to each issue being stuffed to the gills with outrageous levels of graphic violence and gore (which is of course one of the things that made them a must-read for kids). 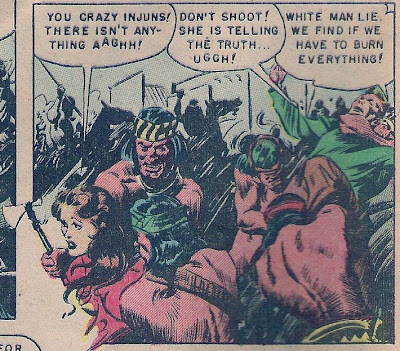 Yeah, this is about as nasty as it gets, and the two remaining stories are no more exploitative. One features art and story so poor that I didn't even bother wasting the time to scan any of it, but the story that rounds out the mag is the bizarre fusion of the western and murder mystery genres, "Murder in the Stockade!," also feeble but it at least contains a couple of notable images, namely the splash panel, 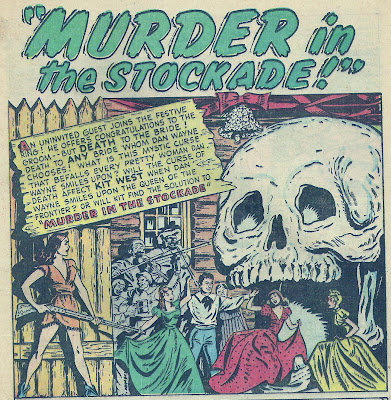 (you've just gotta love the enormous, woman-devouring skull that appears nowhere else in the story), and this lovely depiction of strangulation: 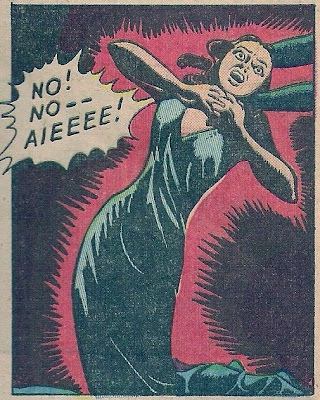 A huge disappointment overall, but at least it only cost me less than ten bucks, postage and handling included. So next on my short list of questionable comics I have to track down is the early "lost" R. Crumb Fritz the Cat story in which Fritz returns home after a fews years' absence to discover that his little sister is now a toothsome sixteen-year-old whom he takes out to the swamp behind their parents' house and fucks, much to her delight; I got that classic during ninth grade but had to throw it out after leaving it on my bedroom floor which allowed my dog to piss on it and some other comics, so it got thrown out. That particular story doesn't show up in either of the so-called complete Fritz compilations or in the multi-volume THE COMPLETE CRUMB COMICS, and I don't remember the name of the comic it appeared in, so if any of may have a clue as to the title please write in.
Posted by Bunche (pop culture ronin) at Monday, May 12, 2008